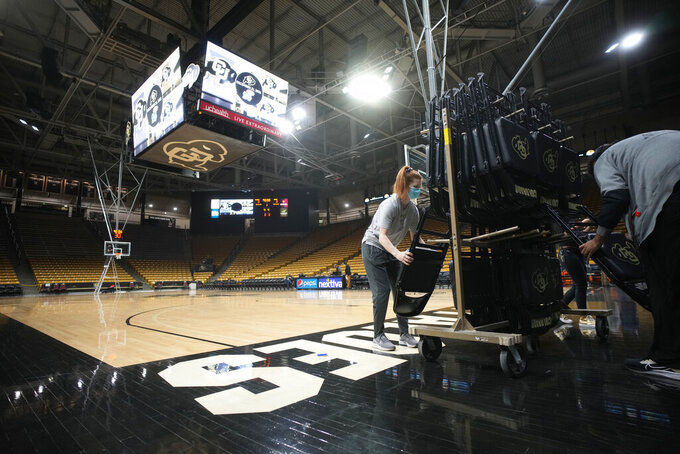 The Atlantic Coast and Pac-12 conferences are changing rescheduling policy to avoid assigning automatic forfeits for teams unable to play due to COVID-19 protocols.

ACC athletic directors unanimously supported the change in Wednesday's first such announcement. The Pac-12 followed in the afternoon amid the rise in COVID-19 cases and the increase in cancellations and postponements of basketball games nationally.

For the ACC, games that cannot be played will be rescheduled if possible. If those games can’t be rescheduled, they will be considered a “no contest” that doesn’t affect a team’s record. The change is retroactive dating to the beginning of the winter-sports schedule, meaning it will remove recent forfeits for the Boston College men’s basketball team against Wake Forest and the Miami women’s basketball team against Duke.

Additionally, men’s and women’s teams must have a minimum of seven available players and one coach to play a game. If a team elects not to play despite having that available number, the game would then be considered a forfeit.

The Pac-12 is similar in terms of the minimum number of players and coaches who must be available to hold the competition, though teams could elect to play with fewer than the minimum. The conference will work to reschedule called-off games, and those that are unable to be rescheduled could be considered a “no contest” upon review and approval by the league commissioner.

Still, the league office would have the option to issue a forfeit if “league standards of sportsmanship are not met."

As with the ACC, the Pac-12 policy is retroactive and now includes the previously canceled UCLA at Washington game on Dec. 5.

The Big 12 recently adjusted its policy as well. In an email to The Associated Press, league spokesman Bob Burda said it allows for a game to be considered a “no contest” if a team has fewer than six scholarship players and one coach. The league will attempt to reschedule games.

Spokespeople with the Big East, Southeastern and Mountain West conferences all said their leagues are evaluating policies, but no decisions have been made on potential changes. The Big Ten issued a statement saying it is also evaluating its forfeiture policy.

In football, No. 23 Texas A&M won’t play in the Gator Bowl against Wake Forest on Dec. 31 because of COVID-19 issues and season-ending injuries, with coach Jimbo Fisher saying the Aggies “just don't have enough scholarship players available to field a team.”

At Alabama, offensive coordinator Bill O’Brien and offensive line coach Doug Marrone have both tested positive for COVID-19 leading up to the College Football Playoff.

Crimson Tide coach Nick Saban and head trainer Jeff Allen said in a joint statement that the two assistants “have very mild symptoms” and are isolating at home. The statement said they expect both O’Brien and Marrone to be available for the Cotton Bowl semifinal game against Cincinnati on Dec. 31.

Elsewhere, the George Washington men’s basketball game against Maryland-Eastern Shore scheduled for Wednesday was postponed due to COVID-19 issues with the Colonials. The teams will work to reschedule the game.