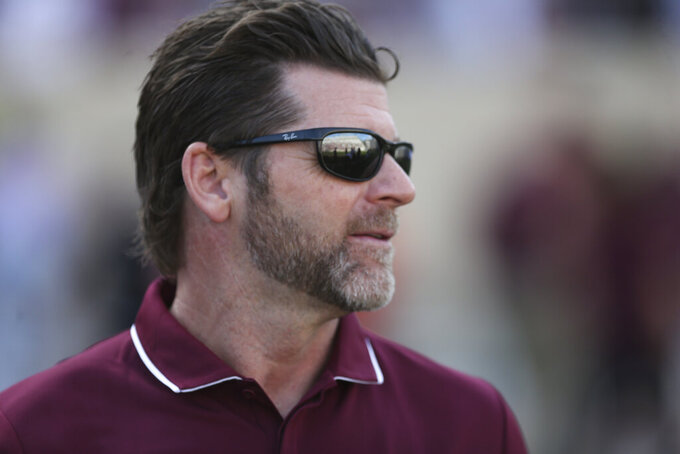 Narduzzi spent the spring seeking a successor to Kenny Pickett, who was expected to be one of the first quarterbacks taken in the NFL draft.

“I was happy we got a lot of work done,” Narduzzi said. “We saw enough in 14 practices that we know who we are and I'm happy.”

The Panthers watched as Nick Patti competed with Southern Cal transfer Kedon Slovis for the starting spot. Slovis, who threw 30 touchdowns as a Trojans' freshman, called it a “no-brainer” joining his new team.

Wake Forest, the first team other than Clemson to win the Atlantic since Florida State in 2014, won a program record-tying 11 games last year. Clawson took some offseason steps to improve a defense that was 10th in the ACC in points (28.9) and yards (413.2) allowed last season.

Clawson hired Brad Lambert as defensive coordinator. Lambert was linebackers coach at Wake Forest under Jim Grobe in 2006, the only other time the Deacons were 11-3.

He will know for sure in about five months.

Tigers coach Dabo Swinney was pleased with what he saw this spring, especially with starting quarterback D.J. Uiagalelei, who struggled early with injuries and off-target throws.

Uiagalelei went 17 of 36 for 175 yards in the Tigers' spring game earlier this month. Still, his body of work was more than good enough to keep him the starter over freshman Cade Klubnik.

Uiagalelei “has had a great spring,” Swinney said. “He has not done anything to not be the starter. Cade is a really talented player. We got two guys, I think, that can win at a high level, just like when Trevor (Lawrence) and DJ were coming out of the spring” in 2020.

It helps that receiver Joseph Ngata has had a injury-free spring. He finished with four catches for 50 yards in the spring game.

All four new ACC coaching hires after last season came in the Coastal, highlighted by Miami bringing in Oregon's Mario Cristobal for Manny Diaz. Cristobal was a former Miami offensive tackle who was part of two national title teams. He's charged with bringing “The U” back to prominence.

The first spring under Cristobal ended April 16 with a commitment to the little details that the new coach regularly preached will determine how far the Hurricanes go this fall.

The Cavaliers had the ACC's final spring game this past Saturday and Elliott saw what he expected four months in.

“I thought that the majority of the guys were going to buy in, but I was still going to have a couple that were skeptical and kind of one foot in the water," Elliott said. “And I’ve got a couple of those.”

In the Atlantic Division, Boston College, Louisville and North Carolina State all have experienced, play-making quarterbacks.

The Eagles hope for a healthy Phil Jurkovec, the Notre Dame transfer who played just six games last year due to a broken bone in his throwing hand. He completed 8 of 17 passes for 143 yards and a touchdown in the Boston College spring game.

Louisville's Malik Cunningham threw for 2,941 yards and ran for 1,034 yards last season. The Cardinals have had losing seasons in three of the previous four years and are hoping Cunningham can lead a turnaround.

AP Sports Writers Charles Odum in Atlanta and Tim Reynolds in Miami contributed to this report.