After early CFP expansion fails, job only gets tougher 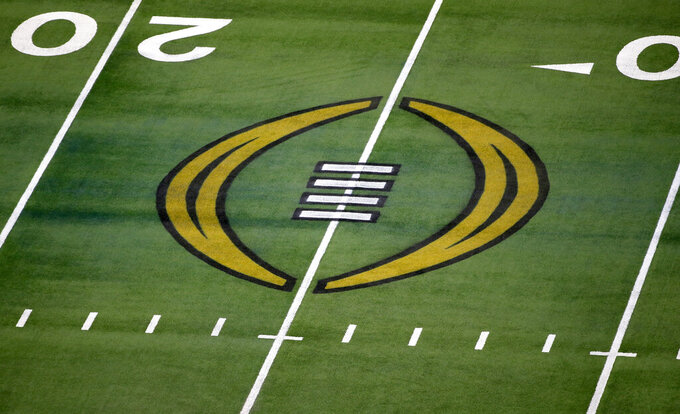 FILE - The College Football Playoff logo is shown on the field at AT&T Stadium before an NCAA college football game in Arlington, Texas, Jan. 1, 2021. The College Football Playoff is set to remain a four-team format through the 2025 season after the administrators who manage the postseason failed to agree on an expansion plan before the current contracts run out. A person involved with the decision told The Associated Press on Friday, Feb. 18, 2022, that the CFP management committee, comprised of 10 conference commissioners and Notre Dame’s athletic director, met by video conference earlier this week. (AP Photo/Roger Steinman, File)

Not expanding the College Football Playoff sooner won't make it easier to expand it later.

The CFP is set to remain a four-team format through the 2025 season after the administrators who manage the postseason failed to agree on a plan to expand before the current contracts run out.

What started with an enthusiastic unveiling of a plan for a 12-team playoff last summer has come to a halt. The college sports leaders tasked with working out the details are at an impasse.

“Seems like everyone says they're committed to expand the CFP, but it's hard to believe that because we can't expand the CFP,” Sun Belt Commissioner Keith Gill told The AP.

“Time was running out," American Athletic Conference Commissioner Mike Aresco said. "The disappointment also stems from the fact that I think we will eventually get there and I think 12-team is still the most likely scenario.”

Aresco, who released a letter Monday detailing the obstacles to expansion, said the purpose of this week's meeting was to determine if anyone's position had changed.

The answer was no.

"So at that point, I guess the implications were clear,” Aresco said.

The university presidents who make up the Board of Managers on Thursday accepted the commissioners' recommendation to abandon the idea of early implementation and directed them to keep working on a new format for the 2026 season.

This process actually started after the 2018 season. With calls for expansion already coming — mostly from the Pac-12 and Big Ten — the presidents asked the management committee for a plan for the next evolution of the CFP. The hope was it could be implemented a few years early instead of waiting for the current 12-year media rights deal with ESPN to run out.

Sankey was part of the four-person subcommittee that produced the 12-team proposal after two years of work. The plan called for the field to be comprised of the six highest-ranked conference champions in FBS and six at-large teams determined by selection committee rankings. The top four seeds would get byes. Four first-round games would be played on the home fields of the higher-ranked teams. Quarterfinals and semifinals would be hosted by bowl games.

Sankey said the group sifted through more than 60 playoff models.

“We’ve identified, already, solutions to some of the concerns identified,” Sankey said. “What strikes me as unfortunate is people haven’t wanted to act on those as they protect their own interests.”

The decision to shelve early expansion came as no surprise. The commissioners left their last in-person meetings in early January gridlocked, frustrated and unable to produce the unanimous consensus needed to move forward.

A few days after the meetings in Indianapolis, Atlantic Coast Conference Commissioner Jim Phillips took the strongest public stance yet against early expansion, saying a new CFP format should not be a priority with so much uncertainty throughout college sports.

On Friday, the commissioners made it official, announcing they had given up on trying to implement expansion for the final two years of the ESPN deal — a failure that will cost the conferences an estimated $450 million in additional revenue.

The road to expansion appeared to be much smoother eight months ago, when the CFP unveiled the 12-team plan.

About a month later, it was revealed the SEC was in talks with Texas and Oklahoma to leave the Big 12 and join the powerhouse league that has produced 12 of the last 17 national champions.

Relatively new commissioners in the Big Ten, Pac-12 and ACC, already leery of a process that started before they were involved with the CFP, became even more disillusioned after learning of the SEC’s expansion plan.

Since then progress has stalled, despite more than half a dozen in-person meetings with the commissioners.

Big Ten Commissioner Kevin Warren has said he favors automatic bids for the champions of the Power Five leagues, instead of the six best champs regardless of conference. The commissioners of the non-Power Five conferences, the so-called Group of Five that includes the AAC and Sun Belt, are against that.

Phillips continued to push for a smaller expansion to eight, if any at all.

Pac-12 Commissioner George Kliavkoff said his conference, which has only placed a team in two of eight playoffs, supports any number of eight- and 12-team formats. But he was asking for the Rose Bowl to retain its traditional New Year’s Day time slot in a new CFP and most of the others are not on board.

“I share the disappointment felt by many college football fans today,” Kliavkoff said in a Twitter post. “I look forward to working collaboratively with other Commissioners to deliver a football playoff format that is more inclusive and balanced.”

“These issues aren't going away,” Gill said. “We've got to get started and over the next 12-18 months have some solutions. I don't know what will have changed between (now and) then.”

Sankey's stance is the SEC already made a concession by agreeing to expand in the first place. The SEC has never been left out of the four-team playoff. When Georgia beat Alabama in the championship game last month, it was the second time two SEC teams played for the CFP title.

But Sankey has acknowledged a bigger field could boost interest in college football nationally.

Now, he said there is no guarantee the SEC will remain supportive of expanding beyond four.

“From our perspective, we’ve given. We’re going to have to go and rethink our position based on how others have approached the conversation that, really, they initiated,” Sankey said. “And I don’t expect that to get any easier.”