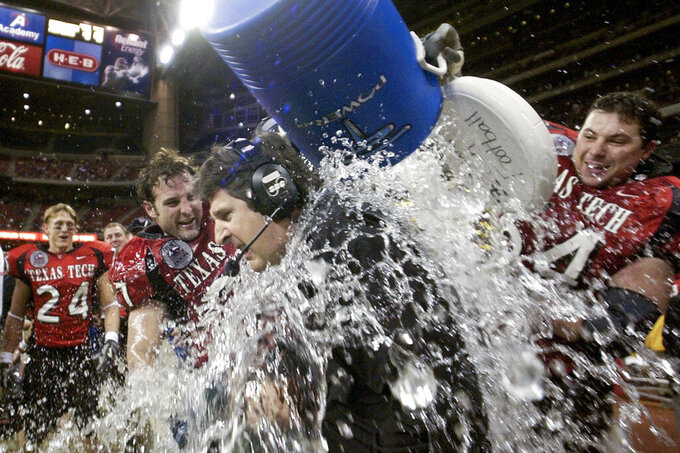 FILE - Texas Tech coach Mike Leach, center, is dunked with water by Wes Welker (27), left, and Cody Campbell (64) right during the final minutes against Navy in the Houston Bowl on Dec. 30, 2003 in Houston. Of the top 25 most-prolific passing seasons in major college football history by yards per game, 12 have direct connections to Hal Mumme and Leach — from Kentucky to Houston to Texas Tech to New Mexico State to Washington State. (AP Photo/David J. Phillip, File)

Mike Leach settles into a leather chair in his office overlooking Mississippi State's practice field after a routine spring session with his team and is asked to give a status report on the Air Raid offense, which has been carving up major-college defenses for the last 25 years.

As is often the case with Leach, his assessment of the pioneering, pass-centric scheme he helped hone into a record-breaking tour de force is a bit over the top but not without merit.

“Well, three of the last four teams that won the Super Bowl have run it so I guess it’s doing pretty good,” the 61-year-old head coach said.

Birthed from the mind of Hal Mumme at a high school in East Texas in the 1980s and passed down to the latest batch of Leach-inspired, 30-something coaches, the Air Raid’s evolution over four decades has made the offense both ubiquitous and inconspicuous.

It would be difficult to watch a football game at any level and not find a team running at least some of the Air Raid's foundational concepts and plays -- mesh, Y cross, four verts, the quick game.

However, finding a team at the highest levels of the sport running Air Raid in a way that resembles what Mumme unleashed on the Southeastern Conference as Kentucky's coach in 1997 is nearly impossible — outside of Leach's teams.

“It's everywhere and nowhere,” said Nate Tice, a former quarterback at Wisconsin who is now a football analyst for The Athletic. “Everyone in college runs Y cross. If you watch Ohio State, they run it 100 times a game, but you don’t think of Ohio State as an Air Raid team. But they’re running Air Raid concepts.”

The Air Raid is more a process than a playbook these days. Keeping things simple, stressing execution over matchups and seemingly endless repetition of a relatively small number of plays in practice are what links the Air Raid's past and present.

“That really to me is the genius of Hal (Mumme) and Mike Leach and what they’ve done is they have a system of teaching and practicing that allows the players to improve at a high level,” said Colorado State coach Jay Norvell, whose quarterbacks coach is Matt Mumme, Hal's son.

One-word play calls, hand signals that take just a finger or two and a slim playbook were hallmarks of Mumme’s Air Raid and still are Leach staples.

“He was basically trying to dumb this thing down for guys that were just learning to play football," Matt Mumme said of his father. “But then realized that the way he was doing it can be highly successful at the collegiate level and it has."

Of the top 25 most-prolific passing seasons in major college football history by yards per game, 12 have direct connections to Mumme and Leach — from Kentucky to Houston to Texas Tech to New Mexico State to Washington State.

Those teams not only produced gaudy stats but numerous coaches, starting with Leach’s first star quarterback at Texas Tech: Arizona Cardinals coach Kliff Kingsbury, who also did a stint leading his alma mater and tutoring Patrick Mahomes in Lubbock.

As the Air Raid tree branched out, its limbs intertwined with other offensive schemes, and the coaches who grew up with it started to build it out.

Washington State offensive coordinator Eric Morris said when he played receiver for Leach at Texas Tech they would practice the same plays so often it got a little boring. He said Leach wasn't interestwed in tweaks.

“What a bunch of people have done is taken kind of that simplistic mindset and those plays and found creative ways to dress it up to where, really, the quarterback's going through the same reads,” said the 36-year-old Morris, who got his start in coaching under Kingsbury. “But it looks different because you run out of a different formation. You run it with a tight end, without a tight end. You run it with a motion. You run it out of a closed set, a wide set.”

Defenses responded to the Air Raid and other versions of the spread offense by putting smaller, faster players on the field and dropping more defenders in coverage. Running the ball more became the obvious counterpunch.

“I got thrown out of the club because we run the ball too much,” said Holgorsen, who got his start in coaching working with Mumme and Leach at Valdosta State in 1993.

Riley, who was a walk-on at Texas Tech under Leach, married a power running game with Air Raid passing concepts as well as any coach during his time at Oklahoma, using pulling linemen and zone blocking schemes.

“I think what kind of elevated the offense at that time was their ability to run the football and run it effectively,” said TCU offensive coordinator Garrett Riley, Lincoln's 32-year-old younger brother. “And then have pops and play-action (passes) off of that where they just had some extremely explosive plays through his time there. I think that’s what a lot of people probably studied.”

New Texas Tech offensive coordinator Zach Kittley, 31, grew up in Lubbock. His first memories of college football were Kingsbury throwing for more than 12,000 yards and 94 touchdowns while running Leach's Air Raid from 1999-2000.

“They were throwing the ball across the yard and that was new for me. As a young kid. I'd never seen that before and I just thought it was awesome,” said Kittley, a former college basketball player who broke into the business working for Kingsbury and with Morris at Texas Tech.

After a successful stint at Houston Baptist, Western Kentucky's Tyson Helton brought Kittley and his HBU quarterback, Bailey Zappe, to Conference USA last season and yet another branch of the Air Raid tree sprouted.

“He's more pro-style,” Kittley said of Helton. “We were able to mesh some of the different pass-protection rules and put in some of the gap-scheme run games that you’re not going to see from your traditional Air Raid attack."

Zappe broke the major-college record for passing yards in a season with 5,967 last year, topping the record of 5,833 set in 2003 by Texas Tech's B.J. Symonds.

Kittley, like many of those who have taken the Air Raid in different directions, doesn't believe the label fits his offense.

But they all respect their roots.

“Man, that's all I've been around for the most part of my career," Garrett Riley said. “And seeing it be consistently successful, and kind of withstanding the different waves of defense and what you see around football, I think there is a little bit of pride taken in that.”