Alabama could start 4 freshmen on defense vs Southern Miss 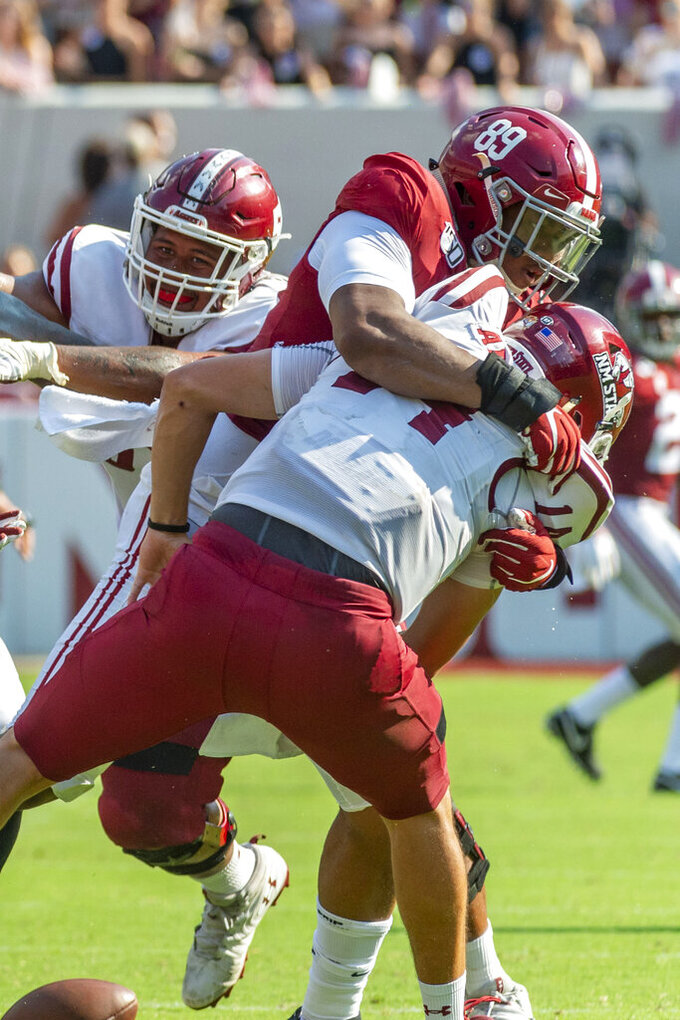 TUSCALOOSA, Ala. (AP) — Nick Saban has started freshman on defense before at Alabama, either through necessity or sheer talent.

He just can't recall having had to rely so much on so many this early in the season. The second-ranked Crimson Tide could start four freshmen in the defensive front seven in Saturday's game against Southern Miss, mostly courtesy of injuries .

"We knew we were going to have to have a lot of depth in our defense with the freshmen and we're really pleased with the freshmen that we were able to recruit last year," Saban said. "And they've done a nice job of working, developing and continuing to improve. But we've had some unfortunate bad luck or whatever you want to call it, losing players at certain positions. A couple of inside linebackers, a defensive lineman.

"These guys have had to be thrust into duty before we thought they would. We're working hard to try to get them to gain the confidence they need to play well on a consistent basis."

The group of Alabama's ready-for-the-SEC freshman defenders has included the likes of defensive backs Minkah Fitzpatrick and Patrick Surtain II — a sophomore this season — and linebacker CJ Mosley.

Nose guard DJ Dale won the job starting with a strong spring . Injuries have moved linebackers Christian Harris and Shane Lee into the starting lineup in all three games. Now, defensive end Justin Eboigbe appears set to join them with LaBryan Ray expected to be out at least six weeks with a foot injury. Freshman safety Jordan Battle is also playing a meaningful role.

Alabama is eighth in the Southeastern Conference in total defense after those injuries and a large exodus of talent to the NFL.

Cornerback Trevon Diggs said he's not too worried about having to rely on all those rookies.

"I feel like football is football," Diggs said. "Most of those guys, when they were in high school as freshmen, (were) starting on varsity and doing stuff like that, so I feel like it's the same thing at the end: it's football.

"Everyone has to play together and play around each other."

They've been able to get some seasoning in three straight lopsided wins, and the Tide is heavily favored against Southern Miss, too. After that, Alabama faces six consecutive Southeastern Conference opponents and the bigger tests begin.

Saban said having such inexperienced players "can be a little limiting at times" but that it's important to avoid asking them to do things they are unsure of.

"But you really can't coach experience into players," he said.

— The 6-foot-3, 308-pound Dale was hardly one of the team's most heralded recruits in this class. But he started drawing rave reviews in the spring as a potential replacement to Quinnen Williams. He has eight tackles and one sack.

"He's different," Tide defensive end Raekwon Davis said. "You don't see many young guys coming in with technique like that. He's playing like he's been in this league a while, and you don't see that that often."

— Lee has filled in capably with the potentially devastating loss of 2018 Butkus Award semifinalist Dylan Moses . He is second on the team with 19 tackles.

— Harris moved up the depth chart with the preseason injury to Joshua McMillon. He has 11 tackles. Sophomore Ale Kaho has seven tackles behind him at that position the past two games.

— Eboigbe is the most unknown entity of the group, for a good reason. He missed the first two games with a foot injury and didn't record a stat in the South Carolina game. Behind him is another freshman Byron Young.

"He's a very young guy, but I think he knows the standard for what the D-Line guys do and I feel like he's going to hold to that standard," Davis said of Eboigbe. "I feel like he's one of the young guys who has stepped up and is ready to show the world he can play big boy football."