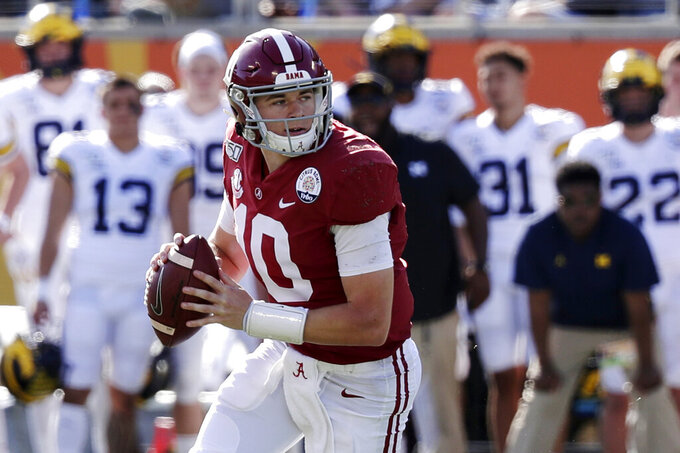 FILE - In this Jan. 1, 2020, file photo, Alabama quarterback Mac Jones (10) rolls ut as he looks for a receiver during the first half of the Citrus Bowl NCAA college football game against Michigan in Orlando, Fla. No. 2 Alabama doesn’t look like a team that lost quarterback Tua Tagovailoa and two first-round receivers. Mac Jones still has a selection of some of the SEC’s best playmakers, including Jaylen Waddle. (AP Photo/John Raoux, File)

Mac Jones has already topped Tua Tagovailoa, Jalen Hurts and every other Alabama quarterback in one category.

After six starts into his career with the second-ranked Crimson Tide, Jones has become the only Crimson Tide passer to connect on three touchdowns of 85-plus yards. It’s a threat that every opponent, including Mississippi on Saturday, has to look out for against Jones & Co.

"It’s something I worked on this offseason with those guys, all those receivers coming out,” Jones said. “Obviously it was hard to work with them but I put an emphasis on that because they’re fast and they can get past the defense and make plays, so we have so many reps at it to where they can just run up underneath the ball and make plays.”

Jones has receivers who can create space with their speed, including, Jaylen Waddle, John Metchie III and DeVonta Smith at his disposal. Having those options certainly helps, but Jones has been able to capitalize with those downfield strikes.

His longest pass was a 94-yarder to Waddle two seasons ago. Then he opened the Citrus Bowl with an 85-yard strike to Jerry Jeudy against Michigan, and hit Waddle again for an 87-yard score last weekend against Texas A&M.

Metchie also caught scoring passes of 78 and 63 yards in the game with the Aggies, though Jones did overthrow him on another deep ball.

“We hit a couple Saturday, missed one,” Tide coach Nick Saban said. "But I think that’s a pretty good batting average. When people are crowding the box and the safeties are trying to cover the receivers, you’ve got to be able to take some shots.”

It's something that Jones has proven to be adept at so far. Brodie Croyle and AJ McCarron each had a pair of 85-plus yard touchdown passes, including McCarron's 99-yarder to Amari Cooper against Auburn in 2013.

But no Tide passer had managed three such long pass completions for scores in his career.

Jones passed for 435 yards against Texas A&M, the fourth-highest total in program history. His passing numbers through six starts are comparable to his two most recent predecessors, with more passing yards (1,893) than either Tagovailoa (1,617) or HUrts (1,692). He's completed 72.5 percent of his passes, a higher rate than Hurts, with 19 touchdowns against three interceptions.

Tagovailoa had 20 touchdown passes and no picks in his first six starts while Hurts' numbers were 14 and two.

“They've got some dynamic guys,” Ole Miss cornerback Jaylon Jones said. “You've definitely got to respect the speed. You see it on film. And on third downs we've just got to make sure we keep everything on top and underneath us to limit their explosive plays.”

Metchie, Alabama's biggest breakout star so far this season, said the deep ball is “all about focus" and said Jones throws a “really good” one.