Alliance "protect or pick" draft: All about the QBs 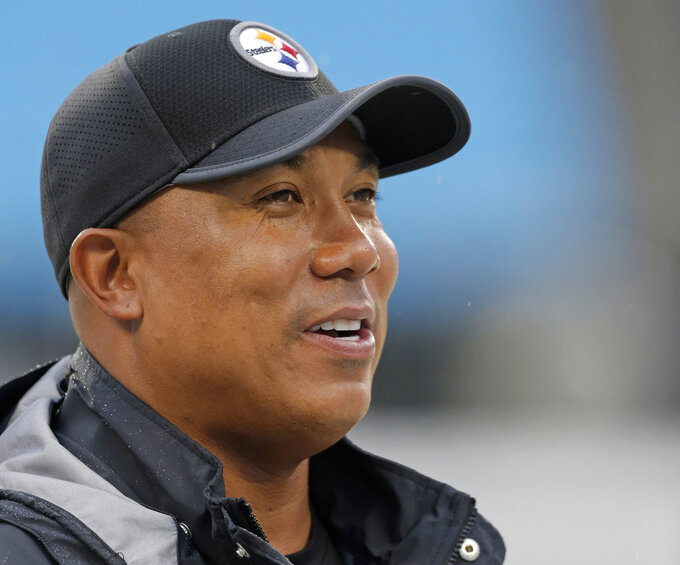 FILE - In this Thursday, Aug. 31, 2017, file photo, former Pittsburgh Steelers wide receiver Hines Ward walks the sidelines before an NFL preseason football game against the Carolina Panthers in Charlotte, N.C. On Tuesday, Nov. 27, 2018, the Alliance of American Football, an eight-team spring league that begins play the weekend after the Super Bowl, will stage a "protect or pick" quarterback draft. Ward, the Alliance's head of football development, will be the host, and the biggest name in the proceedings. (AP Photo/Bob Leverone, File)

How often do football fans hear "It's all about the quarterbacks?"

On Tuesday night, it absolutely will be.

The Alliance of American Football, an eight-team spring league that begins play the weekend after the Super Bowl, will stage a "protect or pick" quarterback draft, which broadcast partner CBS Sports Network will televise live from Las Vegas. Former Steelers star receiver Hines Ward, the Alliance's head of football development, will be the host — and the biggest name in the proceedings.

Still, there should be plenty of intrigue not only to see where the likes of Matt Simms, Zach Mettenberger or B.J. Daniels wind up, but how the draft system works.

A vast majority of Alliance players at all positions will be allocated to one of the eight teams — Memphis, San Antonio, Orlando, Atlanta, Salt Lake City, San Diego, Birmingham and Arizona — based on either where the guy played in college or in the pros. With the QBs, there's an added element.

"We said originally that the first round would consist of everyone picking a protected player allocated to them by college or pro affiliation," says league co-founder Bill Polian, a Pro Football Hall of Fame executive. "The general managers said they would rather have the option to pick someone else if they don't have a guy they really believe in to protect. And we said OK."

Which means the first of the four rounds of the QB draft will consist of some teams protecting players, which will be announced beforehand. Then the actual draft will begin and GMs who did not protect a quarterback can choose from the remaining pool of available passers regardless of their region. No trades are allowed.

"Strategy is involved, something which the GMs wanted," Polian adds, "so there will be some interesting decisions in terms of picks."

Polian has his own list rating the quarterbacks; there were 56 at a training camp last week in San Antonio and 32 will be chosen. As he noted, the Alliance brought in quarterbacks from Arizona and Penn State, but also from Holy Cross and Penn — and a slew of other schools.

The allocation process needed some tweaking.

"If a player entering NFL training camp belonged to one of our franchises, let's say he went to Florida State, so he was belonging to Orlando, " Polian explains, "and then in training camp he was cut and picked up by the Raiders, which makes him property of Salt Lake, who does he belong to? We solved that problem by using his NFL rights as of the start of training camp.

"The other was a player transferring in college. Maybe he went originally to USC and then transferred to SMU. San Diego has the rights to USC, San Antonio to SMU. We determined where did he play the most games in college? That is where he is property of."

Polian has noticed an influx of young players inquiring about the Alliance in recent weeks when they realized a spot in the NFL in 2018 was not coming.

"They recognize they will not get a shot in the NFL this year, so they need to go play in the Alliance," Polian says.