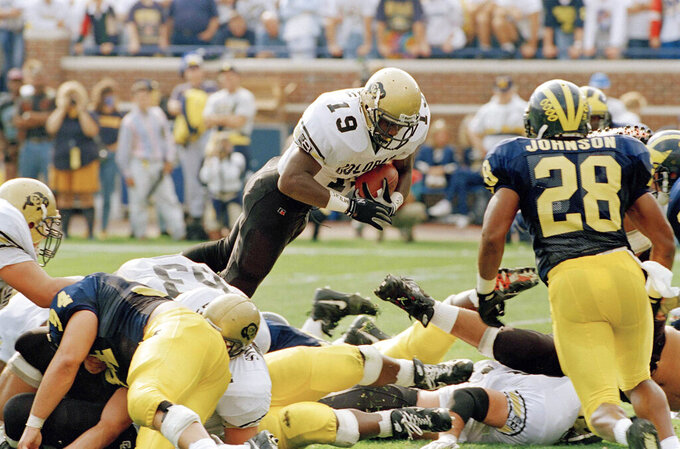 FILE - In this Sept. 24, 1994, file photo, Colorado's Rashaan Salaam (19) dives over the goal line for a 1-yard touchdown against Michigan in the first quarter of an NCAA college football game, in Ann Arbor, Mich. A glance at the list of candidates eligible for selection to the College Football Hall of Fame is likely to produce the following reaction: How is that guy not in yet? Heisman Trophy winners Salaam, Carson Palmer and Eric Crouch are still waiting. (AP Photo/Werner Slocum, File)

A glance at the list of candidates eligible for selection to the College Football Hall of Fame is likely to produce the following reaction: How is that guy not in yet?

The late Jerome Brown, an anchor on some of Miami's best teams in the late 1980s, is not in the Hall of Fame — almost 30 years after his death.

Eric Dickerson, half of SMU's famed Pony Express backfield, is not in yet.

Can that be right?

The National Football Foundation, which administers Hall of Fame selection, emailed on Monday a ballot to its more than 12,000 members and current hall of famers that includes 76 former major-college stars, another nearly 100 former players who played outside the highest level of Division I and a handful of coaches. The complete list . Members can vote for up to 12 players and two coaches. Results of the voting are given to the NFF's honors court, headed by two-time Heisman winner Archie Griffin, which makes the final selections.

To be considered, a player must have been a first-team All-America by one of the organizations recognized by the NCAA, such as the AP, The Sporting News or Football Writers of Association of America. The sheer volume of college football players who meet this qualification makes it impossible for the hall to induct worthy candidates in a timely fashion. Players become eligible 10 years after their college careers end and when they are done playing professionally.

There are some unwritten rules. No more than one player from a school per class. Generally, the NFF avoids having a school represented in two straight classes. That eliminates a bunch of players whose schools were represented last year such as Palmer, Texas defensive tackle Kenneth Sims, Notre Dame offensive tackle Aaron Taylor and Oklahoma safety Roy Williams. There is also a character clause, which is a bit nebulous.

The AP's picks for the class of 2020 includes 12 major-college football players, one from outside the highest-level of Division I and two coaches.

Jerome Brown, DT, Miami — Two other Hurricanes are on the ballot in linebackers Ray Lewis and Dan Morgan. Brown, who died in a car wreck in 1992, was a force on the mid-1980s 'Canes and is long overdue for induction.

Keith Byars, RB, Ohio State — An all-around back in the mid-1980s, well before spread offenses and positionless football. A foot injury ruined his senior season, but he still ranks among the best Buckeyes.

Eric Crouch, QB, Nebraska — The 2001 Heisman winner is a dinosaur of sorts: an old-school option quarterback who didn't pass much. His career ended with a humbling loss to Miami in the Rose Bowl, but he left Nebraska with 59 rushing touchdowns, an NCAA record for a quarterback at that time.

Eric Dickerson, RB, SMU — Playing for the last major-college program to receive the NCAA death penalty has kept Dickerson out, but it is time to honor one of the best running backs ever.

Jumbo Elliott, OT, Michigan — The two-time All-American was one of the first memorably massive tackles at 6-foot-7 and 300 pounds.

Marcus Harris, WR, Wyoming — Harris was the star of Joe Tiller's spread offenses in the mid-1990s, putting up receiving numbers that still hold up to today's prolific passing stats.

Corey Moore, DE, Virginia Tech — Moore was to the Hokies' defense what teammate Michael Vick was to the offense in 1999.

David Pollack, DE, Georgia — Before he was a staple on ESPN's "College GameDay," Pollack was a two-time SEC defensive player of the year. His pro career was cut short by a neck injury.

Antwaan Randle El, QB, Indiana — Dual-threat quarterbacks are everywhere these days. Randle El was one of the first, passing for 7,469 yards and running for 3,895, an FBS record for a quarterback when he graduated in 2001.

Rashaan Salaam, RB, Colorado — The greatest player from maybe the greatest era of Colorado football. The late 1994 Heisman Trophy winner killed himself in 2016.

Larry Blakeney — Troy was an FCS playoff regular under Blakeney, and then won three Sun Belt Conference titles when it moved up to FBS.