Another excruciating sports setback for the A-T-L 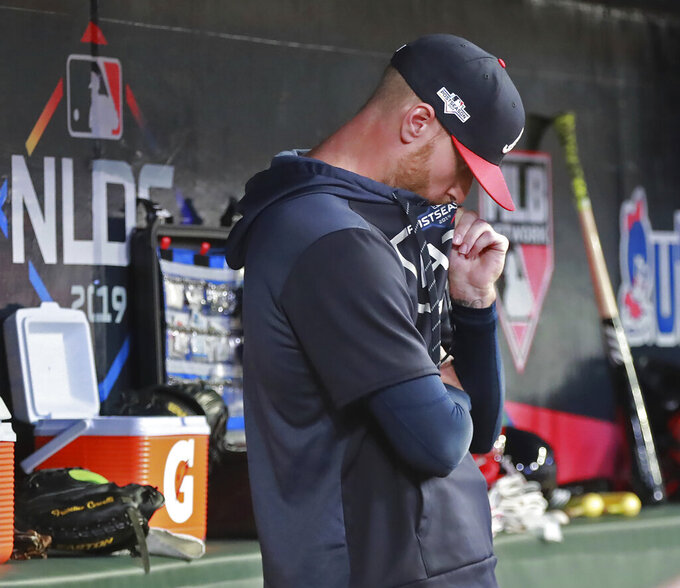 Atlanta Braves pitcher Mike Foltynewicz stands in the dugout during the ninth inning of the team's 13-1 loss to the St. Louis Cardinals during Game 5 of a baseball National League Division Series on Wednesday, Oct. 9, 2019, in Atlanta. The Cardinals advanced to the NL Championship Series. (Curtis Compton/Atlanta Journal-Constitution via AP)

ATLANTA (AP) — At this point, Atlanta sports fans should be numb to the disappointment.

They've been through it so many times.

Yet, somehow, this city's teams keep finding ways to take the misery index to new heights.

A 10-spot in the very first inning?

Can you believe it?

Returning home with another chance to claim their first postseason series victory since 2001, the Braves were wiped out in the decisive game of the NL Division Series before many in the sellout crowd of more than 43,000 had even settled into their seats at SunTrust Park.

The St. Louis Cardinals scored 10 runs their first time up — the first time that's ever happened in a big league postseason game.

"Very disappointing," said Braves manager Brian Snitker, sounding a bit numb after a 13-1 rout. "We all had such great expectations coming into today. Everybody was looking forward to it. I think everybody was ready. And you can't plan for that."

Indeed, no one saw it coming.

Then again, maybe they should have.

After all, this was an Atlanta team and a big-time game.

"Everything went wrong," said Braves first baseman Freddie Freeman, who made a key error that helped open the floodgates in Wednesday night's debacle.

To be fair, the A-T-L has managed two major professional championships: the Braves in the World Series way back in 1995 and soccer's Atlanta United, which captured the MLS Cup title last December.

But the failures far outweigh those rare successes.

The NFL Falcons, who've been around since 1966, have managed just two Super Bowl appearances — and both ended badly.

During the 1998 season, a team known affectionately as the "Dirty Birds" reached the title game against John Elway and the Denver Broncos. Unfortunately for the Falcons, one of their most respected players, Eugene Robinson, was arrested the night before the big game on charges that he solicited an undercover police officer for sex. Thoroughly distracted, Robinson was beaten for a long touchdown and the Falcons staggered to a 34-19 loss.

Of course, that was nothing compared to the Falcons' most recent Super Bowl appearance. Three seasons ago, Atlanta held a 28-3 lead over the mighty New England Patriots late in the third quarter. But Tom Brady led a furious comeback that culminated with the first overtime in the game's history.

Of course, the Patriots won the OT coin toss and drove the length of the field for a 34-28 victory.

The NBA Hawks have never even reached the finals, but at least they're still around. Atlanta's two NHL teams both moved to Canada due to financial problems — the Flames going to Calgary in 1980, the Thrashers following suit in 2011 by relocating to Winnipeg. Neither franchise won a single playoff series.

And let's not forget college football's Georgia Bulldogs, who are essentially an Atlanta team.

They were dealt excruciating losses the last two seasons by Alabama, which rallied from a pair of 13-point deficits to win the 2018 national championship game with a 41-yard touchdown pass in overtime, and then pulled off another comeback in last season's Southeastern Conference title game to deny the Bulldogs a return trip to the national playoff.

Both games were held at Mercedes-Benz Stadium, in the shadow of the Atlanta skyline.

When it comes to postseason disappointment, no one can match the Braves.

The franchise is well known for its record 14 straight division titles from 1999 through 2005, but just as much for having collected only one World Series title with all those playoff appearances. The most bitter loss came a year after its biggest triumph: the Braves easily won the first two games of the '96 Series at Yankee Stadium and were up 6-0 in Game 4, seemingly assured of building a 3-1 lead.

But New York's Jim Leyritz tied the game with a three-run homer, the Yankees won in extra innings and would go on to take the title, four games to two.

The Braves have never come so close again to winning a title.

Even worse, they've now lost 10 straight playoff rounds since their last triumph in the 2001 NLDS, tying the ignominious record for postseason failure set by the Chicago Cubs from 1908 to 2003. Rubbing even more salt in the wound, eight of those series setbacks have ended with a loss on Atlanta's home field.

It happened again Wednesday. The Cardinals celebrated in the middle of the field before gathering on the pitcher's mound to pose for a triumphant picture with the Braves logo serving as a backdrop on the enormous center-field video board.

"I think it was more of a shock than anything," Braves third baseman Josh Donaldson said. "You don't expect something like that to happen, especially with how well we played all season."

He might as well have been speaking for the entire city.

Then again, it wasn't really a surprise.