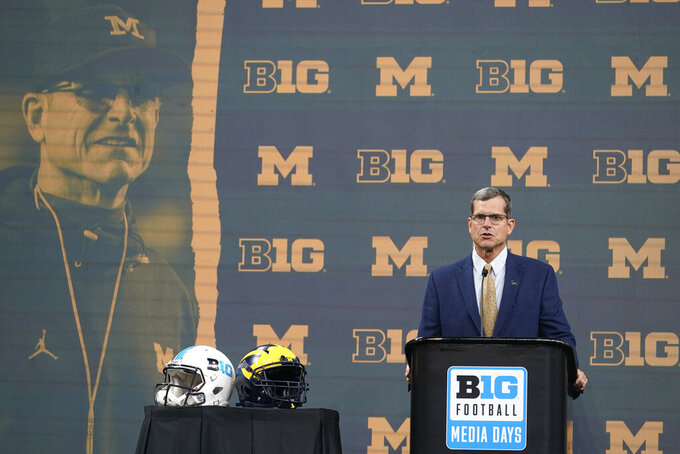 As the Big Ten prepares to become a 16-team, coast-to-coast superconference with the additions of USC and UCLA in 2024, it is ending a 40-year relationship with ESPN and moving toward partnerships with two new networks.

Two people familiar with the negotiations told The Associated Press on Tuesday that the Big Ten was looking for a seven-year deal worth $380 million per year to broadcast its football and basketball games from ESPN, and the network declined.

Both spoke to The AP on condition of anonymity because the negotiations were not being made public.

The deal would not have given ESPN first choice of Big Ten football games in a given week at any point and would have reduced the number of Big Ten games the network could broadcast from the current 27 to about half that number, one of the people familiar with the talks said.

Fox, which owns 61% of the Big Ten Network, will remain the conference's primary rights holder, with CBS and NBC set to join as partners, one of the people told The AP.

CBS' long-term deal with the Southeastern Conference is set to expire after the 2023 season. That deal gave CBS the rights to the SEC's football game of the week, usually slotted in the 3:30 p.m. Eastern time window on fall Saturdays.

ESPN secured that SEC package to go with the rights it already owned from the powerhouse conference for $300 million per year. Starting in 2024, ESPN will be the exclusive network home of the SEC.

It appears CBS will replace SEC football with the Big Ten on Saturday afternoons, though the network is not likely to have the exclusive first choice of games the way it did with the SEC.

The Big Ten said Tuesday in a statement its new television contracts are still being finalized.

“The conference continues to have productive meetings with both linear and direct-to-consumer media partners,” the conference said.

An announcement on a new set of deals that is expected to be worth more than $1 billion annually to the Big Ten is expected soon.

Sports Business Journal first reported ESPN was out of the Big Ten negotiations and CBS and NBC were each positioned to land a piece of the conference’s rights for upward of $300 million per year.

In June, the Big Ten announced it was expanding West with the additions of the Pac-12's two flagship Los Angeles-based schools: Southern California and UCLA.

The move came a little less than a year after it was revealed Texas and Oklahoma would be leaving the Big 12 and joining the SEC in 2025, when the Big 12's TV contract runs out.

The Pac-12 is next up to the negotiating table among the Power Five conferences, with deals set to expire after the 2023-24 season. The Big 12's current deals run out after the 2024-25 academic year.

While neither conference is expected to come anywhere close to landing deals that rival in value the Big Ten's and SEC's, not having the Big Ten creates more space for ESPN to fill on its family of networks.