AP Top 25 Reality Check: ND is back; Who else can return? 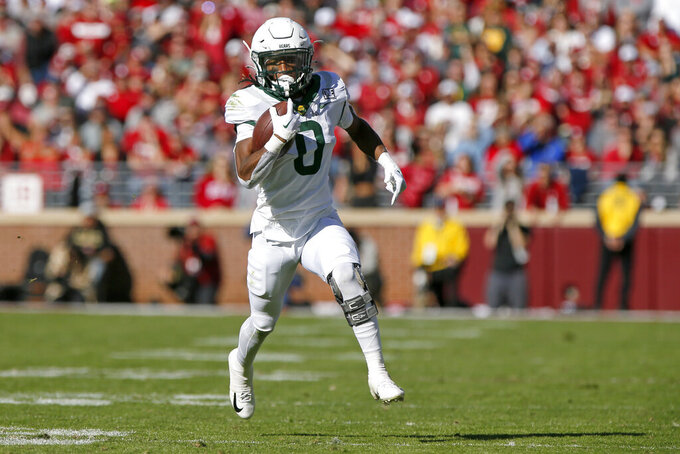 Baylor running back Craig Williams carries the ball against Oklahoma in the first half of an NCAA college football game, Saturday, Nov. 5, 2022, in Norman, Okla. (AP Photo/Nate Billings)

No. 20 Notre Dame is back in The Associated Press college football poll after struggling early this season.

Meanwhile, Oklahoma State and Wake Forest became the latest teams from the preseason AP Top 25 to slide out as eight ranked teams lost this past weekend.

Heading into the stretch of the season, there are 14 teams that started the season ranked and are now unranked. If that number holds it would match the record for turnover from start to finish in the AP Top 25 presented by Regions Bank.

The preseason No. 5 Fighting Irish were near the top of the list of the season's most disappointing teams after losses to Marshall and Stanford. Now after handing Clemson its first loss, Notre Dame has a chance to make a strong closing statement.

Keep an eye on preseason No. 10 Baylor (6-3). The defending Big 12 champions still have a chance to get back to the conference title game. Same goes from preseason No. 23 Cincinnati in the American Athletic Conference.

Teams change throughout a season, which is why Reality Check supports second chances. and encourages voters to keep those teams that fall out of the rankings on the radar.

Next: at Mississippi State, Saturday.

Reality check: W ith a disruptive performance against Tennessee, DT Jalen Carter showed the country why he will be one of the first players picked in the next NFL draft.

Ranking: Do you have to ask?

Next: vs. Indiana, Saturday.

Reality check: Getting QB C.J. Stroud a little more involved in the running game might be the boost the Buckeyes need on the ground. He ran for 79 yards at Northwestern.

Ranking: This is fine.

Next: vs. Nebraska, Saturday.

Reality check: Only two Big Ten teams (Iowa and Rutgers) have fewer passes that have gained at least 10 yards than the Wolverines' 69. They're limited on the outside.

Reality check: Horned Frogs overcame another second-half deficit and faced another team that lost its starting quarterback to an in-game injury. They're good, but there is a loss — or two — coming.

Next: vs. Missouri, Saturday.

Reality check: The heavy lifting is done. The Vols have a chance to cruise home in potential playoff position against Missouri, South Carolina and Vanderbilt.

Next: vs. No. 24 Washington, Saturday

Reality check: The Ducks' stretch run will prove their worth: Washington, No. 13 Utah, Oregon State and likely either No. 8 USC or No. 9 UCLA in the Pac-12 title game.

Next: at Arkansas, Saturday.

Reality check: The development of QB Jaylen Daniels has been remarkable.

Ranking: Tigers are seventh in the SEC in offense (6.10 yards per play) and 10th in defense (5.52), but a plus-4 turnover margin and the ability to do different things well week-to-week has them with a chance to win the conference.

Next: vs. Colorado, Saturday.

Reality check: Trojans are down to 108th nationally in yards per play allowed. If QB Caleb Williams can win a Pac-12 championship, give him the Heisman.

Next: vs. Arizona, Saturday.

Reality check: Bruins ran for 392 yards without star RB Zach Charbonnet against Arizona State. Nobody better than coach Chip Kelly at scheming up the running game.

Next: at No. 11 Mississippi, Saturday.

Reality check: The inability of a high-level wide receiver to emerge from a room full of blue-chip recruits is the most confusing part of the Tide's struggles.

Ranking: Little low. Remember, two loses on the road on the last play of the game.

Reality check: Welcome to Lane Kiffin watch season as the open Auburn job will crank up the speculation about the Ole Miss coach's future.

Next: vs. Louisville, Saturday.

Reality check: You could see trouble on the horizon for Clemson throughout its 8-0 start, but, boy, did it come crashing down against Notre Dame. Most troublesome: The Tigers' touted D-line getting mauled.

Next: vs. Stanford, Saturday.

Reality check: Utes have not gotten the star season expected out of RB Tavion Thomas, but still rank fourth in the Pac-12 in rushing at 4.96 yards per carry thanks to mobile QB Cam Rising and deep tailback room.

Next: vs. Maryland, Saturday.

Next: at Wake Forest, Saturday.

Next: vs. Boston College, Saturday.

Reality check: In six of their seven games against Power Five teams, the Longhorns have been outscored in the second half.

Next: at Connecticut, Saturday.

Reality check: Hugh Freeze's teams get a lot for offense, but it's the defense propelling the Flames. They are 21st in the country in yards per play allowed 1t 4.95.

Next: vs. Navy in Baltimore, Saturday

Reality check: The way this season has gone for the Irish, they will follow up beating Clemson with losing to the Midshipmen (3-6).

Reality check: Illini opened the door a crack for the rest of the Big Ten West by slipping up against Michigan State in a game they outgained the Spartans by 141 yards.

Reality check: How good are the Knights chances to play in the AAC title game if they beat Tulane? They'd be alone in first with Navy and South Florida left to play.

Next: at Baylor, Saturday.

Reality check: Wildcats still have Big 12 title hopes, because the Big 12 is kind of nuts.

Next: at Syracuse, Saturday.