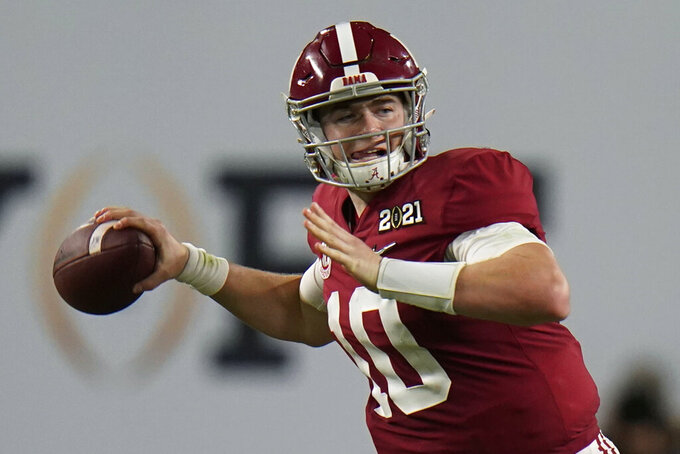 For those fans who are a tired of the same teams gobbling up the College Football Playoff spots and finishing near the top of the AP Top 25, here is reason to hope next season could be different.

The first five teams in the final AP Top 25 released Tuesday are very likely to be breaking in new starting quarterbacks next season, saying goodbye to a group that includes three Heisman Trophy finalists and two other multiyear starters and school record-breakers.

Of course, before you start celebrating a changing of the guard, remember that in the case of the top three teams — Alabama, Ohio State and Clemson — waiting in the wings are blue-chip recruits who have a chance to be the next big things in college football.

The last six seasons have begun with either Alabama (three), Clemson (two) or Ohio State No. 1. Even with the turnover at quarterback that is likely to be the case in 2021.

To help turn the page, Reality Check takes a look at the final rankings of the strange 2020 season with an eye toward how these teams will head into 2021.

(Note: Players have until Jan. 18 to declare for the draft, and that means underclassmen and upperclassmen after all players received a free year of eligibility for playing through a pandemic. Reality Check is making educated guesses on some players who have yet to declared will do.)

Reality check: Young draws comparisons to Kyler Murray, and Nick Saban always seems to have blue-chippers ready to step up. No reason to think Alabama won't start next season No. 1. Maybe two?

Reality check: The Buckeyes were upperclassmen heavy this season, but mostly sitting on a freshman class with huge potential. They will be top five to start next season.

Open: vs. Georgia at Charlotte, Sept. 4.

Reality check: The Tigers should be fine at quarterback, but what could make them preseason No. 1 for a third straight years is a defensive line with enormous upside.

Reality check: The Aggies looked primed to build on their breakout season if a good replacement for Mond emerges. Figure they will start rankings Nos. 4-6.

Reality check: Wisconsin transfer QB Jack Coan could be Book's replacement, but significant losses along the offensive line and defensive front seven could nudge the Irish out of the preseason top 10.

Reality check: The Sooners will bring back most of their best defense in years and a quarterback with first-round talent. Easy top five to start 2020.

Reality check: There will be a case to be made for the Bulldogs as preseason No. 1 in 2021, though they will probably have to settle for three or four.

Reality check: Cyclones are coming off the best season in school history and will bring most of the team back. Iowa State will get strong top-10 consideration heading into 2021.

Reality check: The Wildcats could lose a ton from a very good defense, but have some quality pieces to build around. That could get them preseason ranked for the first time since 2013.

Reality check: This was a special season led by a special quarterback for the Cougars. Without Wilson heading into next season, BYU is at best in the back end of the preseason Top 25.

Reality check: If Michael Penix Jr. returns, both from a knee injury and to Indiana for another season, an experienced Hoosiers team could be preseason top 15.

Reality check: A rebuild on offense, but potential for improvement on defense. Florida will probably start 2021 ranked in the teens.

Reality check: One of the best stories of the 2020 season, but the Chanticleers will need to prove it wasn't a fluke.

Reality check: The Ragin' Cajuns have strung together consecutive double-digit win seasons, but turning over their skill talent will likely leave voters looking elsewhere in the preseason.

Reality check: The Hawkeyes ended the season with six straight victories and could break into the preseason top 15 on the strength of a seasoned offense.

Reality check: If coach Hugh Freeze does indeed return — keep an eye on Tennessee — the surprising Flames should have a roster and schedule lined up to win a lot of games. And maybe squeeze into the bottom of the preseason rankings.

Reality check: The Tar Heels say goodbye the best running back duo in the country, but return one of the best quarterbacks, which should be good for a spot in the top 20.

Reality check: New coach (Steve Sarkisian) and new quarterback, but — as always — alluring overall talent. The Longhorns will be ranked in the preseason again and folks will complain about it.

Reality check: A rebuild on the defensive side for the Cowboys after falling short of lofty 2020 expectations. Still, good enough to start 2021 ranked.

Reality check: The Trojans have a chance to bring back a stacked class of upperclassmen and a potential first round draft pick quarterback. If they hadn’t been such a let down so often in recent years, they could be a preseason top 10 team. Because they have, probably around 15.

Reality check: After a late season fade and King's bowl game injury, the 'Canes will probably be ranked in the back half of the Top 25 when they face Alabama.

Reality check: There was a lot of Group of Five love this season, but the Cardinals snuck up at the end by winning the MAC and then a bowl against San Jose State. They'll have to prove it again in 2021.

Reality check: If the Spartans get some key seniors to return to join Starkel, they could edge perennial contender Boise State as the Mountain West favorite. That's probably not enough to get preseason ranked.

Reality check: The Bulls will have to replace both of their star runners with Patterson heading to the NFL and Marks to the transfer portal, which means no preseason ranking.