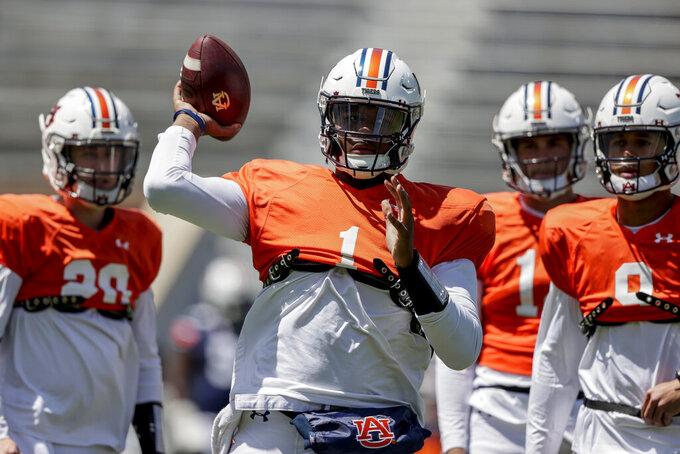 The starting job opened up when three-year starter Bo Nix transferred to Oregon. It appears to still be wide open following the spring practices, which concluded with the A-Day game on Saturday.

Finley insists there's no sense of deja vu for him from his LSU days, but the reality is he has been there and done that. It didn't go his way two years ago.

“Life is all about competition,” Finley said. "You’re always competing for a job. Bringing those guys in only lit a fire in me to get better, which I needed, especially after a season like last year.

“We’re all supportive of each other and we understand what’s going on. We’re competing for one job, so may the best man win.”

Finley replaced an injured Nix for the final three games last season, but the Tigers extended their losing streak to five games. He had directed a 98-yard, game-winning drive against Georgia State.

Finley started five games for LSU as a freshman — following an injury to Myles Brennan.

Finley was replaced in the final two by Max Johnson, then finished the following spring behind both of them. So he headed to Auburn.

Coach Bryan Harsin made it clear the job remained up for grabs by hitting the transfer portal both for depth and competition. It's no secret to either Harsin or Finley that the Tigers need to have better quarterback play to be successul after ending on such a sour note.

“He’s not afraid of competition, I know that, whatsoever,” Harsin said. "And he’s about the team and wants to help guys to be successful, too. He’s got plenty of things to work on, too. He knows that. He's trying to better himself.

“He’s done those things in the spring. He's changed some things up.” Calzada could prove to be the biggest challenger for the job. He started 10 games for Texas A&M last season, directing an upset of then-No. 1 Alabama with his best performance (285 yards, three touchdowns).

Calzada is still recovering from a shoulder injury and was limited in the spring. He didn't participate in Saturday's scrimmage but has thrown passes in things like 7-on-7 drills.

“Every single rep Zach has had an opportunity to take, I think he has done a pretty good job,” Harsin said. “So he is going to be in the mix.”

Ashford, who is from Hoover, Alabama, is a former four-star recruit who spent the past two seasons at Oregon but didn't play. The former baseball player took off running several times, though quarterbacks were off-limits for tacklers and down on first contact.

The running ability could still net him playing time, however the competition ends up.

“Him using his legs is going to be a key factor for us this year,” Finley said. “We might be able to get him in there and do some quarterback draws and things like that. I can’t wait to see what he brings to the table in the fall.”

Redshirt freshman Dematrius Davis has entered the transfer portal, taking one quarterback out of the mix.