Back in the poll, 24th-ranked Cincinnati hosts underdog USF 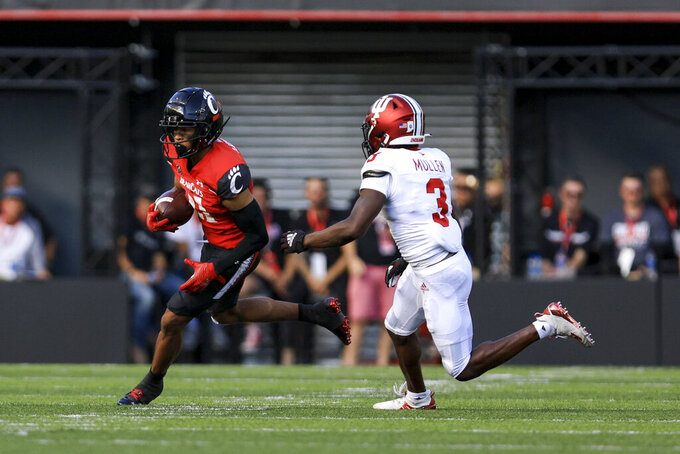 Line: Cincinnati by 27 1/2, according to FanDuel Sportsbook.

Cincinnati is back in the AP Top 25 at No. 24 after reeling off four straight wins following the Bearcats' season-opening loss to Arkansas. On Saturday, Cincinnati will be looking to extend the nation's second-longest home winning streak to 30 and beat South Florida for a fifth straight time. The Bearcats have won 17 consecutive games against American Athletic Conference opponents. South Florida, meanwhile, is losing games by an average of 29 points, aside from a three-point loss to Florida.

Stopping the run has been a point of emphasis for the Bearcats this season. The Bearcats allowed only 36 yards on the ground in last week’s win at Tulsa. After giving up 224 in the opener against Arkansas, they have allowed 78 per game in the four games since. South Florida averages 172 rushing yards led by Brian Battie, who has 397 yards and three TDs while averaging 7.7 yards per carry.

South Florida: QB Gerry Bohanon has struggled since transferring from Baylor with three TD passes and six interceptions. He is completing less than 56% of his passes.

Cincinnati hasn't lost at home since Temple beat them 35-24 on Nov. 10, 2017. ... The Bearcats' 29-game home winning streak is the second-longest in the nation behind Clemson (37). ... A victory over USF would be head coach Luke Fickell’s 53rd at Cincinnati, tying him with Rick Minter for most in program history. Fickell is in his sixth season. It took Minter 10 seasons to reach that total. ... USF is allowing 38 points per game while Cincinnati is scoring more than 40 points per contest. ... Jimmy Horn Jr.’s 89-yard kickoff return for a touchdown to start the second half in the Bulls’ season-opening loss to BYU marked USF’s fourth kickoff return for a touchdown in the last eight games. Battie led the nation with three last season.