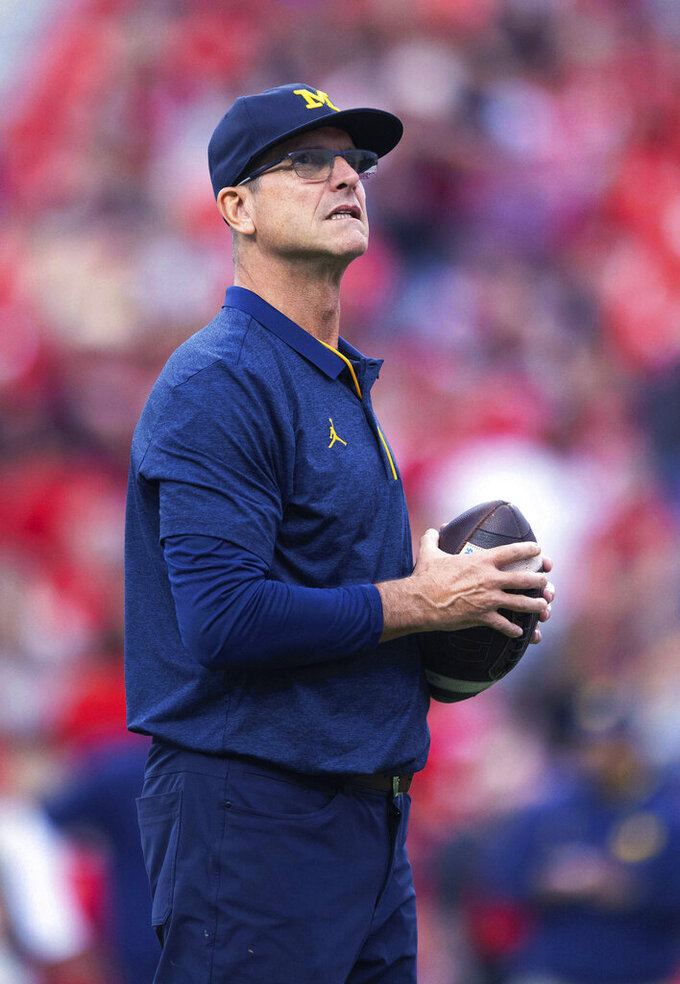 FILE - Michigan coach Jim Harbaugh stands on the field as players warm up for an NCAA college football game against Nebraska on Oct. 9, 2021, at Memorial Stadium in Lincoln, Neb. Harbaugh is The Associated Press college football coach of the year after leading the Wolverines to their first Big Ten title in 17 years and a berth in the College Football Playoff. (AP Photo/Rebecca S. Gratz, File)

FORT LAUDERDALE, Fla. (AP) — Working for Jim Harbaugh, sometimes it is hard to know when the conversation is over.

Florida Atlantic coach Willie Taggart was an assistant under Harbaugh at Stanford for three seasons and recalls occasionally approaching his boss for a chat in the hallway or office. Without warning, Harbaugh's mind could dart elsewhere and he would drift away, often to return in 10, 15, maybe even 30 minutes later to pick up right where he left off — as if he never left.

It took some getting used to, but Taggart was clear: Don't let Harbaugh's quirks distract you from his most important trait: “He's a winner."

Harbaugh has been the most scrutinized coach in college football for seven seasons, defined by his failures despite a resume loaded with success.

Now that he has delivered on the promise he brought to his alma mater — b eating archrival Ohio State and leading the second-ranked Wolverines to the College Football Playoff and a date against No. 3 Georgia on Friday night — the idea that he was ever doubted seems almost silly.

In 17 seasons as a head coach in college and the NFL, Harbaugh is 156-65 (70%). If you want to know what makes Harbaugh successful, the answers will come from those who played for him, worked with him and have been on the receiving end of his recruiting pitches.

The characteristics that make Harbaugh seem a little weird — wearing khakis every day so he doesn’t have to think about his wardrobe, for example — well, his supporters will tell you they are ingenious. The glint in his eye that makes you wonder if he is really listening? That's a sign of a hyperactive mind, always working on the next thing. The slogans and sayings that seem corny? The sincere mantras of a guy who loves competing more than anything else.

“Plainly put, what makes him tick is competition and being the best version of yourself, so when you try and distill down his principles, why he was successful as an athlete and why he’s successful as a coach it’s because of this relentless positivity and enthusiasm and competitiveness,” said J.T. Rogan, who played for Harbaugh at San Diego and worked as his director of communications at Michigan.

Jack Harbaugh, who coached John Elway at Stanford during a career that spanned four decades, instilled in his son a desire for daily improvement. That led Jim Harbaugh to Michigan, where he started at quarterback for Bo Schembechler in the mid-1980s, guaranteed a victory against Ohio State in 1986 (then delivered it) and went on to become a first-round draft pick by the Chicago Bears.

During a 15-year NFL career, Harbaugh was more serviceable starter than star. He earned the nickname “Captain Comeback," but also built up a thick skin.

“He's been criticized all his life, if you think about it," said Taggart, who played quarterback for Jack Harbaugh at Western Kentucky. "Playing quarterback, you’re going to always get that criticism. I think he's probably immune to it all.”

As a coach, Harbaugh's resume is Hall of Fame worthy. At San Diego, a school that had little history of success before he arrived, he went 22-2 in two seasons. UCLA staffer Tim Drevno spent 14 years working for Harbaugh as an assistant coach, starting at USD.

“I’ve never been around a guy that motivates a team the night before the game better than him. He’s really special at it," said Drevno, who recalled Harbaugh reciting a poem off the top of his head about going into battle before San Diego played a game at Dayton. “He really makes it fun.”

Harbaugh then flipped a Stanford program that had hit rock bottom in the Pac-12. After four years, he had the Cardinal in the Orange Bowl and finishing No. 4 in the country in 2010.

He performed a similar turnaround in the NFL with the San Francisco 49ers, taking a struggling franchise to three straight NFC championship games. Longtime NFL running back Frank Gore said Harbaugh immediately changed the 49ers' culture, stripped away a losing mentality and made it them against the world.

“If you don’t love football, It’s going to be hard to play for Harbaugh,” Gore said.

Taggart said you know where you stand when you work for Harbaugh.

Chris and Mya Hinton found Harbaugh to be sincere, but could not help but notice his mercurial side when he recruited their son, Chris, who starts on the defensive line for the Wolverines.

“We heard that going in that he was a little quirky,” said Chris Hinton, who was a Pro Bowl offensive lineman with the Colts and Falcons during a long NFL career.

Mya Hinton added: “I think his mind never stops working. And so sometimes you may be on a topic and it sparks something else in him and he seems like he’s going off on a tangent, but by the time he’s done you realize that it’s all connected.”

Harbaugh's process can be disruptive and difficult to sustain. He wore out his welcome with the front office at the 49ers and even at Stanford there was a sense Harbaugh's departure and the transition to David Shaw was good for the program.

So when Harbaugh didn't hit the high notes at Michigan over his first five seasons — no Big Ten titles, no victories against Ohio State —- after so much fuss was made about his arrival, it became easy for critics to dismiss his “Enthusiasm Unknown to Mankind” ethos as more sales pitch than substance.

When Michigan went 2-4 during the abbreviated 2020 season it seemed as if Harbaugh's tenure had already peaked. Somewhat surprisingly, Michigan brought him back at a reduced salary and a buyout. If 2021 didn't go well, Michigan could move on far more affordably.

Instead, with a team that for the first time under Harbaugh had no preseason ranking, it all came together.

“I know how happy everybody was to get that done for him just because he’s an easy target, especially these past couple of years," star defensive end and Heisman Trophy runner-up Aidan Hutchinson said.

Getting Harbaugh to talk about himself can be more difficult than blocking Hutchinson. Critics? What critics?

“What they say, the they, to me that’s always been completely irrelevant. It means nothing whether they’re saying something good about you or something bad about you,” Harbaugh said. “All I know is there's a foxhole, we’re in it. And wherever the fire is coming from, we want to be running into it.”