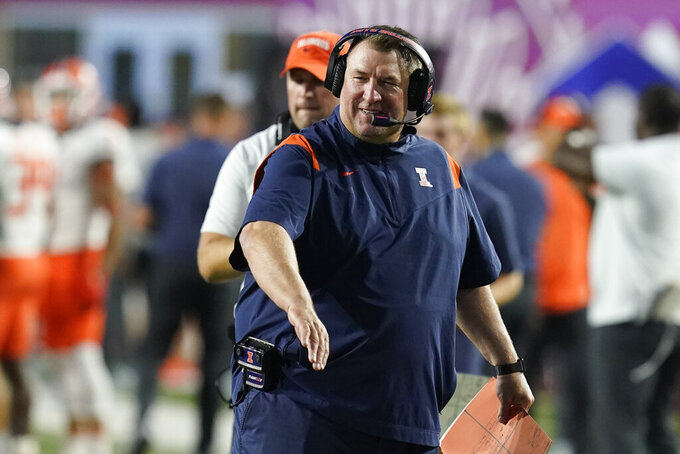 FILE - Illinois head coach Bret Bielema smiles after a touchdown during the first half of an NCAA college football game against Indiana, Friday, Sept. 2, 2022, in Bloomington, Ind. Less than two full years on the job, Bret Bielema and his Illinois football team are achieving at a rate not seen in the program in a long time. Bielema is the pick for top coach in the Associated Press Big Ten Midseason Awards, Tuesday, Oct. 11, 2022.(AP Photo/Darron Cummings, File) 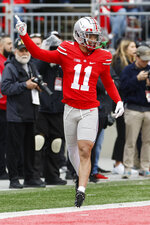 Second-year coach Bret Bielema and his Illinois football team are achieving at a rate not seen in the program in a long time. A very long time in some cases.

Bielema and his Illini are well represented in The Associated Press' Big Ten midseason awards.

Before Bielema arrived, the Illini had averaged 2.5 conference wins per year since the Big Ten went to the current East-West divisions in 2014.

Road wins over a top-10 Penn State and a West-leading Minnesota highlighted Bielema's first season, but few predicted the Illini's rise this year. They were sixth in the seven-team West in the preseason media poll.

Illinois has allowed six or fewer points in three games and leads the nation in scoring defense at 8.0 per game. Its points-against average is its lowest since 1950. The Illini are on track to post their best marks in rushing defense (67.2 ypg) since 1964 and in total defense (228 ypg) since 1966.

The offense has found a steady hand in DeVito, who had plenty of scars to show from his four years at Syracuse. No quarterback in the Bowl Subdivision was sacked more than DeVito in his 19 games as the Orange's starter, and he left the team at midseason last year after losing the job.

DeVito announced his transfer to Illinois in December and beat out Art Sitkowski in preseason camp. He has limited his mistakes as Chase Brown, whose 879 rushing yards lead the nation, has been the main attraction.

DeVito injured his ankle in the first half against Iowa last week and he's questionable for Saturday's home game against West Division co-leader Minnesota.

“It’s going to be a big game on Saturday,” Bielema said, “because we’ve made it a big game.”

QB C.J. Stroud, Ohio State (6-0, 3-0 Big Ten). The Buckeyes' quarterback has established himself as the Heisman Trophy front-runner after being a finalist last year. Stroud leads the nation in touchdown passes (24), passer rating (207.5) and yards per attempt (10.9). He has fumbled just once in six games after coughing up the ball six times in 12 games last season. Last week he threw for 361 yards and a school record-tying six touchdowns against Michigan State.

CB Joey Porter Jr., Penn State (5-0, 2-0). The son of Pittsburgh Steelers great Joey Porter has taken his game to a higher level and is one of the nation's top lockdown cornerbacks. Purdue threw Porter's way 14 times in the season opener, according to Pro Football Focus, and he broke up five passes. Opponents have targeted him just eight times since, and he's given up just one catch in the last three games. His 10 pass breakups are tied for second nationally.

RB Nicholas Singleton, Penn State. The nation's No. 1 running back in the 2022 recruiting class is one of the Big Ten's top breakaway threats. He leads the nation with five runs of at least 40 yards, with three of them going for touchdowns. His 7.35 yards per carry rank fifth. He's the third-leading first-year freshman rusher with 92.6 yards per game.

WR Charlie Jones, Purdue (4-2, 2-1). His move to the Boilermakers was genius. He reunited with his childhood friend in quarterback Aidan O'Connell and has caught 50 passes for 603 yards and seven touchdowns. Last year, in 14 games for Iowa, he had 21 catches and three TDs. He's been targeted 69 times and has dropped just one ball, according to PFF.

Michigan State was the AP's midseason surprise team in 2021 after starting 7-0 and earning a top-10 ranking. Things have changed for Mel Tucker and the Spartans (2-4). They've lost all four of their games against Power Five teams and they're winless in their first three conference games for the second time in 16 years. Injuries have plagued the defense, which is giving up 445 yards per game, and the offense has been held under 300 yards in two of its three conference games.

Kirk Ferentz of Iowa (3-3, 1-2) has been skewered for his stubborness in how he deals with the worst offense in the country. Complicating matters is that his son, Brian Ferentz, is the offensive coordinator. Ferentz has built up plenty of capital over 24 years as head coach, and the Hawkeyes are the defending West champions, but the fan base's patience is wearing thin.

It's scary to think how prolific Ohio State's offense could be if it had a healthy Jaxon Smith-Njigba, the top returning receiver in the country. A hamstring injury has limited the AP preseason All-America first-team pick to four catches for 36 yards over two games. He's missed the last three games and could be ready to play against Iowa after this week's open date.