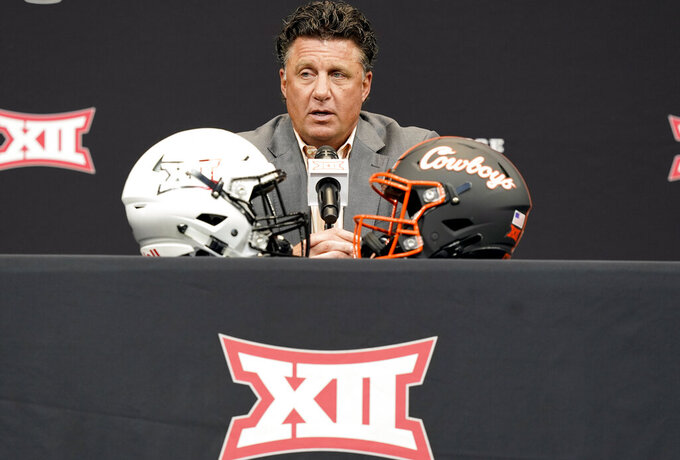 Mike Gundy is the only Big 12 head coach still around from the last time the conference was going through so much change. That a little more than a decade ago, about the time Oklahoma State won its only championship in the league.

With new commissioner Brett Yormark already in place, the Big 12 is going into its 12th and final season with 10 teams before getting bigger.

“I don’t think there’s any question as this moves forward that the Big 12 Conference is in a tremendous position,” said Gundy, the former Oklahoma State quarterback in his 18th season as head coach at his alma mater.

Gundy feels the same way about his 12th-ranked Cowboys, with fourth-year starting quarterback Spencer Sanders among 10 returning offensive starters after they came up only inches short of beating Baylor in the Big 12 championship game last December — and maybe making the four-team College Football Playoff. Oklahoma State has had 17 consecutive winning seasons, all with bowl appearances.

“We don't really get out of our box much at Oklahoma State,” Gundy said. “We have a culture and a philosophy and a system we believe in."

Tenth-ranked Baylor had a 10-win improvement from coach Dave Aranda’s debut only a year earlier. The Bears went 12-2, including a 21-16 win in the Big 12 title game after fourth-and-goal stop in the final minute. They host Oklahoma State on Oct. 1.

Blake Shapen became Baylor's top quarterback after the sophomore beat out since-departed incumbent starter Gerry Bohanon in spring drills. Shapen was the Big 12 championship game MVP in one of his two starts last year when Bohanon was injured.

Four new schools join the Big 12 next summer, and three of them are in The Associated Press preseason Top 25: No. 23 Cincinnati, No. 24 Houston and No. 25 BYU. That matches the number of current league members ranked: No. 9 Oklahoma, Baylor and Oklahoma State.

The Big 12 was first a 10-team league in 2011 after Colorado left for the Pac-12 and Nebraska for the Big Ten. Oklahoma State won the outright Big 12 championship that season, the first of six years in a row the league didn't have a title game.

TCU and West Virginia joined the Big 12 in 2012, the same year that Bob Bowlsby became commissioner. Texas A&M and Missouri left then for the Southeastern Conference, where they will be joined by past national champions Oklahoma and Texas no later than the 2025 season.

“You've seen great coaches, great teams, really consistently play week in and week out," said Iowa State’s Matt Campbell, the league’s second-longest tenured coach in his seventh season. ”It makes every game that gets played in this conference really special.”

As many as nine Big 12 teams could have a different starting quarterback in their season opener than they did in 2021.

Tyler Shough is set as Texas Tech's starter for the second year in a row. The former Oregon transfer played in the first four games last year before suffering a broken collarbone.

Sanders missed Oklahoma State's '21 opener because of COVID-19 protocols. Max Duggan could start for TCU again, but was competing with Chandler Morris for that job. Jalon Daniels is expected to start for Kansas even though Jason Bean is still there.

Hunter Dekkers succeeds Iowa State’s winningest QB. Brock Purdy had been the Cyclones starter since the middle of the 2018 season.

New Oklahoma coach Brent Venables was defensive coordinator for the Sooners during their 2000 national championship season, then was Clemson’s DC for two national titles before returning to Norman.

Sonny Dykes took over at TCU after the past four seasons at SMU. Dykes worked in an off-field role for the Horned Frogs in 2017 under Gary Patterson, their head coach to start the past 21 seasons.

Joey McGuire is the eighth coach at Texas Tech, including three interim head coaches, over a 14-season span. He was a Baylor assistant the past five years after winning three Texas high school state championships.

Will McDonald IV, DE, senior, Iowa State. The Big 12 leader in sacks in each of the last two seasons had 11 1/2 last year, and also forced five fumbles.

Bijan Robinson, RB, junior, Texas: He ran for 1,127 yards and 11 touchdowns in a season cut short by a dislocated elbow.