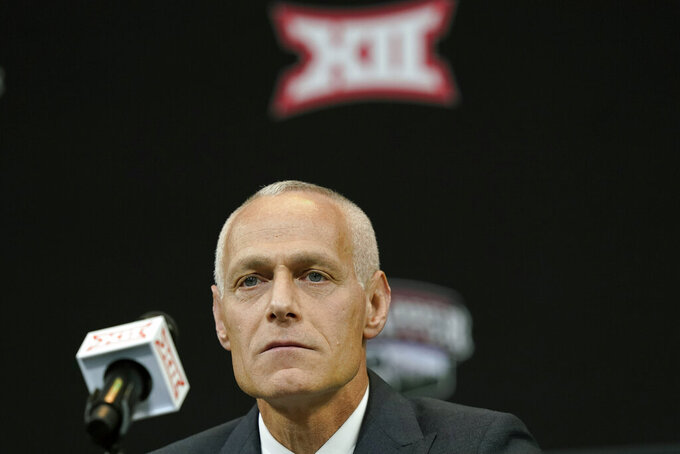 IRVING, Texas (AP) — The changing Big 12 Conference plans to enter into discussions with ESPN and Fox about a potential early extension of its media rights deal that still has two more football seasons left after this one.

New Big 12 Commissioner Brett Yormark said Wednesday that given the changing landscape of college athletics, the league welcomes “the opportunity to engage with our partners to determine if an early extension is in the best interest of all parties."

An early negotiation for the Big 12 could be significant, given that the Pac-12 board of directors a month ago authorized pushing up negotiations for its next media rights agreements after the decision by UCLA and Southern California to leave for the Big Ten. The Pac-12′s current deal expires in 2024.

The Big 12's deal with ESPN and Fox goes through the 2024-25 academic year. That also is the latest that Oklahoma and Texas, the league's only football national champions, will leave to join the expanding Southeastern Conference.

ESPN said in a statement that the network does "regularly engage in conversation around the future with all of our partners, but to be clear, we have not opened the contractual negotiation window with the Big 12 at this time.”

That window for exclusive and formal negotiations with ESPN and Fox is still about 18 months away, in early 2024, if there are no changes before then to the deal that began in September 2012 after the league went to its current 10-team configuration.

Football independent BYU, along with American Athletic Conference schools Cincinnati, Houston and UCF join the Big 12 next summer. BYU, Cincinnati and Houston were all ranked in the preseason AP college football poll, matching the number of current Big 12 members in the Top 25.

The Big 12's announcement came two weeks after the Big Ten reached seven-year agreements with Fox, CBS and NBC to share the rights to the conference’s football and basketball games. That deal is worth about $7 billion.

“The Big 12 has enjoyed a fantastic relationship with its multi-media rights holders, and I look forward to having these conversations,” Yormark said.

Conference officials said then that revenues were expected to increase again over the next two years. When the four new schools join the Big 12 next summer, the league will spread across eight states and three time zones.