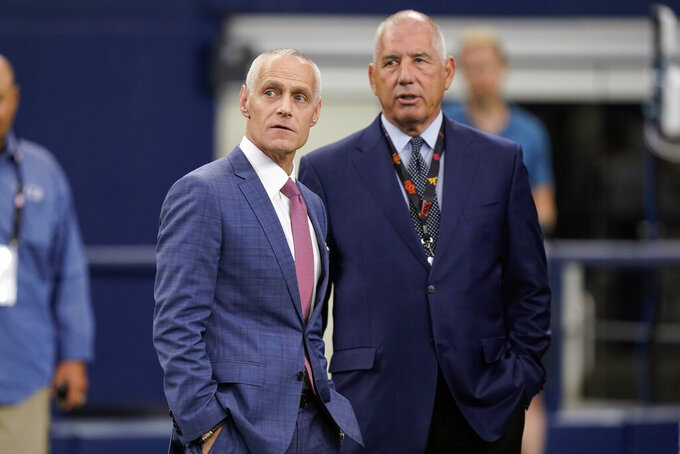 ARLINGTON, Texas (AP) — New Big 12 Commissioner Brett Yormark is learning the NCAA's issues in real time and during a period of sweeping change and uncertainty.

While Monday is Yormark's first day working full-time out of the Big 12 office, leaving behind Jay-Z’s Roc Nation, the ex-CEO of the NBA’s Brooklyn Nets has been steadily involved in conference matters since landing his first job in college athletics.

He was named the Big 12's new leader on June 29. A day later, conference realignment became a pressing issue again when Southern California and UCLA said they would be leaving the Pac-12 in 2024 to join the Big Ten.

Beyond that, Yormark has to get familiar with name, image and likeness compensation for athletes, the transfer portal, FBS conferences potentially splitting from the NCAA with their own governance structure for football, and the future of the College Football Playoff.

“One of his best qualities is he doesn’t pretend to know what he doesn’t know … He asks a lot of questions, and listens,” Baylor athletic director Mack Rhoades said of Yormark. “He hasn’t been in the industry, so he’s got to absorb all of that, which is, just under normal circumstances, difficult. But then throw on top of that conference realignment part two.”

When asked during his introduction at Big 12 football media days in mid-July if there were active talks with any Pac-12 schools, Yormark said his league was “open for business” and exploring all options for the future — but gave no specific details.

Pac-12 Commissioner George Kliavkoff expressed frustration Friday, saying he has spent the past month “trying to defend against grenades being lobbed in from every corner of the Big 12 trying to destabilize our remaining conference.” He also said his league intends to keep its current members and entertain new additions.

The Big 12 is going through another transition in membership, and its media rights deal with ESPN and Fox Sports expires after the 2024-25 academic year. While Oklahoma and Texas are set to leave for the Southeastern Conference no later than the 2025 season, four new schools will join the Big 12 next summer.

Yormark brings an outside perspective to what has been a resilient conference, as well as a background in building brands.

Before joining Roc Nation in 2019, where he was chief operating officer on the commercial side of the business, Yormark spent almost 15 years with the Nets, overseeing the club’s move from New Jersey and construction of the Barclays Center. He previously worked for NASCAR, where he oversaw a $750 million agreement with Nextel Communications for naming rights to the circuit’s top racing series.

Yormark said he pledged the Big 12 board of directors that he would ensure the league would be “bold and humble, aggressive and thoughtful, and innovative and creative” in growing its brand and business — and becoming a bit more contemporary.

“One thing is crystal clear. There is no higher priority than to best position the Big 12 for its upcoming multimedia rights negotiations,” Yormark said. "Everything we do must create momentum for these negotiations, as well as building the value of the Big 12 brand and business.”

When the Big 12's only football national champions leave, the league will have only half of its original 12 members. Nebraska left for the Big Ten and Colorado went to the Pac-12 in 2011. Texas A&M and Missouri joined the SEC the following season.

The Big 12 added TCU and West Virginia in 2012, the same year Bob Bowlsby became commissioner. The 70-year-old decided earlier this year that he was ready to step out of that role.

Within weeks of the Sooners and Longhorns getting invitations from the SEC last summer, the Big 12 approved membership for football independent BYU and American Athletic Conference schools Cincinnati, Houston and Central Florida.

Yormark plans to visit all 14 campuses in the coming months, including the four schools that will join next summer, as well as departing Oklahoma and Texas.

“He’s the perfect guy for us right now,” TCU athletic director Jeremiah Donati said. “He’s going to be aggressive, he’s going to be bold. He’s not going to apologize for it. … We’ve got to just stand behind him and let him do his thing and continue to put us in the best possible positions as we can.”