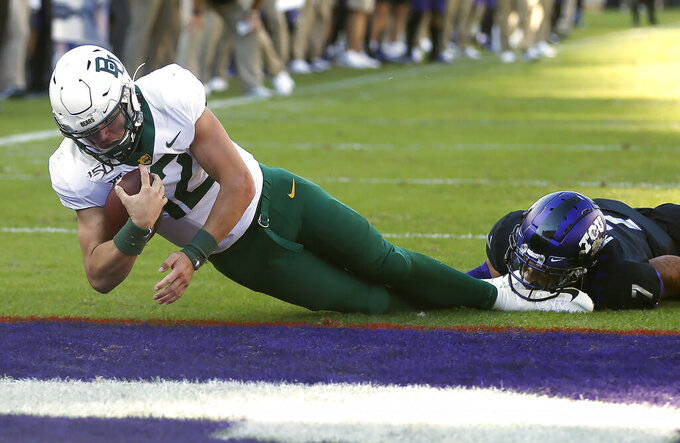 Baylor quarterback Charlie Brewer (12) dives across the goal line to score a touchdown as TCU safety Trevon Moehrig (7) goes to the ground during the second overtime of an NCAA college football game, Saturday, Nov. 9, 2019, in Fort Worth, Texas. Baylor won 29-23 in triple overtime. (AP Photo/Ron Jenkins)

A potential Big 12 championship game preview. The four-time defending conference champion Sooners pretty much have to win out if they want the chance to be in the College Football Playoff again this season. Baylor is 9-0 for only the second time in school history and has won 11 games in a row overall. All three of Baylor’s wins over Oklahoma came between 2011-14, and each was significant. The 2011 win pushed Robert Griffin III to the Heisman Trophy, and the Bears won their only Big 12 titles after wins Oklahoma in 2013 and 2014.

Oklahoma’s young offensive line against Baylor defensive front. The Sooners, with four sophomore OL starters, have allowed a Big 12-low 10 sacks while blocking in for dual-threat and very mobile quarterback Jalen Hurts. Baylor has a league-high 29 sacks, including a league-best 8½ by defensive end James Lynch.

Oklahoma: WR CeeDee Lamb leads the nation with 13 TDs receiving, and has only one game this season without scoring. The junior has 31 TDs in 37 career games. He has 13 catches for 302 yards the last two games.

Baylor: LB Terrel Bernard had 19 tackles last week against TCU, the most by a Baylor player since Sam Holl’s 21 in 2011 against Kansas. Bernard became the starting middle linebacker when leading tackler Clay Johnston was lost for the season because of a knee injury in the sixth game. Bernard also had an interception and a sack.

Oklahoma has run 29 fewer offensive plays than its opponents this season, but has outgained them by 2,099 yards. The Sooners lead the nation with 598 total yards per game, even while ranking 118th with only 63 plays per game. ... Baylor is the Big 12’s best allowing only 19 points a game. Oklahoma leads the league scoring 48 points a game. The Sooners have scored at least 34 points in 19 consecutive games. ... The Sooners have won 18 consecutive November games since its 2014 home loss to Baylor.