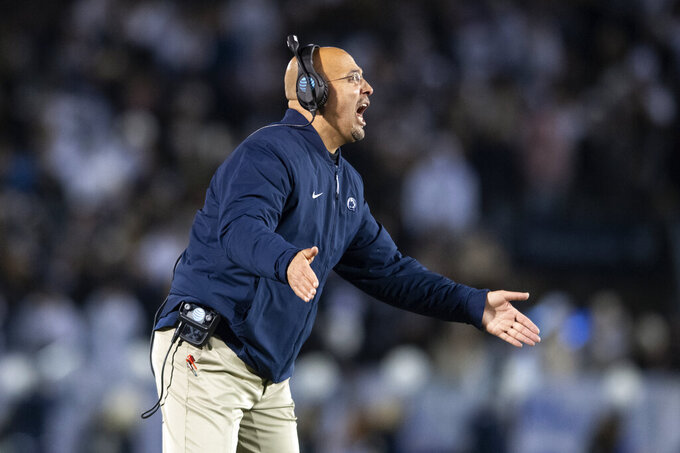 Franklin then expressed similar admiration about the high-scoring Tigers with quarterback Brady White, who are representing the Group of Five teams in the Cotton Bowl on Saturday.

“All the wonderful things he said about our defense I appreciate, but we also know we have a tremendous challenge with their offense and what they've been able to do, not only this year but over the last four years," Franklin said Friday.

While Penn State is in its third New Year's Six game in four seasons, and 50th bowl overall, the American Athletic Conference champion Tigers are in their first NY6 game — in what will be Silverfield's first game as their head coach after first coming to Memphis with Mike Norvell.

“Like we always say every year, the next one is the most important game, but this one is obviously pretty darn special," Silverfield said. “This is a game I will never forget for many reasons."

His debut comes in what is considered by most the biggest game in Tigers history. They are in one of the major bowl games after school records of 12 wins this season and 38 wins the past four years under Norvell, who left after the AAC championship game to become Florida State's coach.

“I'm going to sit back in my chair and one day be like, 'Dang, we did something no Memphis team has ever done before'," running back Patrick Taylor Jr. said. “That's something we're going to be able to talk about for years and years to come, to our grandchildren, to our children.”

White has thrown for 3,560 yards and 33 touchdowns for the Tigers, who have a 1,000-yard rusher (Kenneth Gainwell, who stepped in when Taylor got hurt in the season opener) and 1,000-yard receiver (Damonte Coxie). They average nearly 41 points and 481 total yards a game.

“They present a lot of great challenges. But I also feel like we've been going against some of the best players in the country all season, especially in practice every day," said Micah Parsons, Penn State's All-America linebacker.

Penn State allows only 14.1 points a game and just over 4 1/2 yards per play — only 2.6 yards per rush. The Nittany Lions have forced 20 fumbles, most among FBS teams.

While the 84th Cotton Bowl is a matchup of a great defense against a group of offensive playmakers, there is also that Power Five vs. Group of Five element.

“We take every team the same,” Penn State running back Journey Brown said. “We know these guys are good. Obviously they made it this far.”

When Penn State played in the Cotton Bowl for the first time more than seven decades ago, Wally Triplett and Dennie Hoggard became the first black players in the game.

Triplett, who died last year at age 92, caught the tying touchdown for the Nittany Lions in a 13-13 tie against SMU on New Year's Day 1948. He later became the first black player drafted by the NFL from Penn State.

“Not being able to stay in town in Dallas and the team having to stay on an Air Force base. It was just some great history to talk to our players about,” Franklin said.

Penn State will have a decal on its helmets Saturday to honor Triplett.

Franklin said this week provided an opportunity “to be able to take some time and talk about history, history of our game of football, history of our specific universities, history of the Cotton Bowl, and more importantly history of our country and how far we've come in a short period of time."

White, the 23-year-old former graduate transfer from Arizona State, has acknowledged that this might be his last game with the Tigers even though he has one more season of eligibility.

“I've been a big believer in just being present. And so I've been really focused on the season and this team," he said this week. “I do recognize that I have to start thinking of the future and what I want to do."

White did say he wouldn't leave Memphis to go play elsewhere as a senior.

“I'm trying to figure out if it's best to move forward in my career, or to stick around and finish my last year," he said.

Both teams will have different offensive play callers for the Cotton Bowl.

Norvell had been the play caller for Memphis, and Penn State offensive coordinator Ricky Rhane left to become head coach at Old Dominion.

“People make a bigger deal of it than it really is,” Johns said. “We've had a great time as a staff game planning."

Memphis also will have a different coach calling defenses since defensive coordinator Adam Fuller went to Florida State with Norvell. Linebackers coach Kevin Clune will have the duty Saturday.

Memphis senior tight end Joey Magnifico will miss the game because of an infection in his knee. The Tigers will also be without starting left tackle Scott Dill, who left the team in what Silverfield called a mutual decision. The 6-foot-7, 300-pound Dill started all 13 games this season.