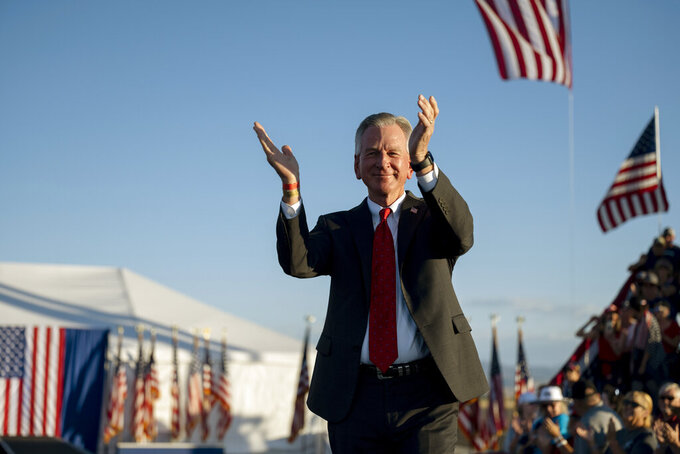 U.S. Sen. Tommy Tuberville, R-Ala., is introduced at a rally for former President Donald Trump at the Minden Tahoe Airport in Minden, Nev., Saturday, Oct. 8, 2022. Tuberville says that Democrats support reparations for the descendants of enslaved people because “they think the people that do the crime are owed that.” (AP Photo/Jose Luis Villegas)

As far as Jeremy Ellis is concerned, Republican Tommy Tuberville should know or learn more about the long history and struggles of the Black Alabama residents he represents in the U.S. Senate.

Tuberville told people Saturday at an election rally in Nevada that Democrats support reparations for the descendants of enslaved people because “they think the people that do the crime are owed that.”

His remarks — seen by many as racist and stereotyping Black Americans as people committing crimes — cut deeply for some, especially in and around Africatown, a community in Mobile, Alabama, that was founded by descendants of Africans who were illegally smuggled into the United States in 1860 aboard a schooner called the Clotilda.

The 2019 discovery of the vessel in the muddy waters near Mobile offers the best argument for reparations of some type to the descendants of the enslaved people who survived the long and arduous Atlantic crossing.

“I think that Sen. Tuberville’s comments were misinformed, ignorant in nature and an embarrassment for the state of Alabama,” said Ellis, who now lives in Marietta, Georgia, and is president of the Clotilda Descendants Association.

Before running for the U.S. Senate, Tuberville spent four decades coaching football, including 11 years as the head coach at Auburn University, which is about a three-hour drive northeast of Mobile.

Ellis graduated in 2003 from Auburn’s engineering school and said he attended all of the football team's home games while at Auburn. Ellis also said he served as a student assistant for the team under Tuberville.

“I think it would suit Sen. Tuberville to visit Africatown," Ellis said. "It’s an area he is extremely familiar with since he recruited a number of his players there when he was head football coach.”

Tuberville's remarks about the Democratic Party's response to perceived rising crime across the nation come just weeks before the Nov. 8 general election, as Republicans seek to regain control of Congress.

The first-term senator has not publicly responded to backlash from his words, which have revived the national debate about reparations.

In April 2021, a House panel approved legislation that would create a commission to study the issue. President Joe Biden's White House said earlier that he backs studying reparation s for Black Americans.

“When they illegally brought my ancestors to the Mobile, Alabama, area a crime was committed,” Ellis told The Associated Press on Tuesday. “And now that we have the actual artifacts, evidence of the crime, I think this is a clear and perfect case study.”

Tuberville's statements "are the words of a man who is trying to lead a desperation effort to discredit and discount the fact that reparations are owed,” said Darron Patterson, past president of the Clotilda Descendants Association and Ellis' cousin.

Patterson, who lives in Mobile and says his great-great-grandfather was a slave aboard the Clotilda, criticized Tuberville's assertions.

"Are you saying the descendants of slaves are the only ones doing crime in this country?” Patterson said. “We’ve got people in Washington that really don’t understand what their job is. We sent you there to do the job. The job is to have America’s best interest at heart. How in the world is America’s best interest at heart when you make a statement that Democrats are for crime and the ones doing the crimes are the ones hollering for reparations?”

Patterson said he plans to meet next week with Tuberville.

Tuberville's message was directed at the base of MAGA Republicans seeking office and supporters of former President Donald Trump, an ally of Tuberville, according to Ron Daniels, convener of the National African American Reparations Commission.

The remarks present “an Emancipation Proclamation moment” for Biden, a Democrat, to embrace the federal study on reparations and say, “'I stand on the side of racial justice and racial healing,'" Daniels said.

“I think this is quite strategic,” Gooding said. “Let's see where it goes. He's in a small town in Nevada. We're a couple years away from the next major national election. He’s leveraging time, pulling some of the rhetoric out piecemeal and in small dosages. Being a successful football coach for so long, strategy literally is his game."

But what Tuberville said about reparations and crime “doesn't make any sense,” Gooding added.

“The idea that ‘they want to take over what you got, then control what you have’ stokes fearmongering,” Gooding said. “Then he throws in reparations. Reparations has to do with repairing the human crimes that were committed.”

Data compiled by the FBI shows that crime has slowed in the last year and most crimes are committed by white people, who make up more than 75% of the U.S. population, according to the Census Bureau.

The data was released Oct. 5. It showed violent and property crime generally remained consistent between 2020 and 2021, with a slight decrease in the overall violent crime rate and a 4.3% rise in the murder rate. That’s an improvement over 2020, when the murder rate in the U.S. jumped 29%.

Figures from some of the nation's largest police departments weren't included in the FBI report.

An analysis of crime data by The Brennan Center for Justice also shows that the murder rate grew nearly 30% in 2020, rising in cities and rural areas alike.

Williams, based in Detroit, is a member of AP's Race and Ethnicity team.