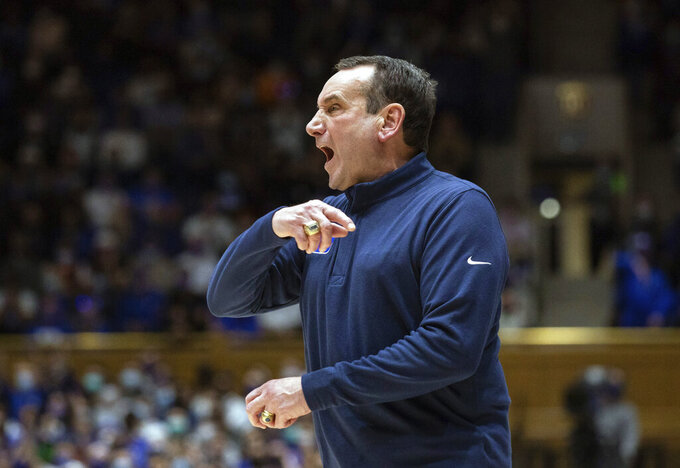 Duke head coach Mike Krzyzewski reacts to a call during the second half of an NCAA college basketball game against Virginia Tech in Durham, N.C., Wednesday, Dec. 22, 2021. (AP Photo/Ben McKeown)

Boise State has pulled out of the Arizona Bowl and shut down all team activities due to COVID-19 issues within the program.

The Broncos were scheduled to play Central Michigan at Arizona Stadium on Friday but instead joined numerous college basketball programs that have been hit with coronavirus issues coming out of the Christmas break.

“We feel for the young men in our program who were very much looking forward to closing out their season, and for some, their football careers,” Boise State athletic director Jeramiah Dickey said Monday in a statement. “I would personally like to thank Kym Adair and her team at the Arizona Bowl for putting together a first-class student-athlete and fan experience that we are extremely disappointed to miss.”

Arizona Bowl organizers are seeking a replacement for Boise State.

Washington State is available to play and would have relatively short travel after Miami pulled out of the Sun Bowl in El Paso, Texas.

Central Michigan also could play the Cougars in the Sun Bowl, which will be broadcast on CBS while the Arizona Bowl will be streamed on title sponsor Barstool Sports’ multiple platforms.

College basketball also will have a notably lighter schedule this week after the pandemic caused several games to get canceled or postponed.

The Atlantic Coast Conference and Big East announced Monday they were scrapping three and four games, respectively, scheduled to take place over the next several days.

That included No. 2 Duke’s game Wednesday night at Clemson. Other ACC matchups that won’t take place as scheduled Wednesday include Florida State at Boston College and Virginia Tech at North Carolina. The Georgia Tech-Syracuse game scheduled for Wednesday was postponed earlier.

UConn's game against No. 23 Xavier scheduled for Tuesday was scrapped because of COVID-19 issues involving the Huskies.

Illinois also had its game on Wednesday against Florida A&M wiped out because of positive tests within the Illini's program.

The Big East cited COVID-19 issues within the Georgetown and St. John’s programs in canceling their game scheduled for Saturday. Marquette’s game at St. John’s on Wednesday and Xavier’s Jan. 4 game at Georgetown also have been called off.

Big East officials said they would attempt to reschedule the games in accordance with the conference’s game cancellation policy.

Most major college conferences, including the Big East, Atlantic Coast Conference, Southeastern Conference, Big 12 and Pac-12, have changed their policies recently to say that games that can’t be played because of COVID-19 will be rescheduled — and if they can’t be rescheduled, they’ll be considered a no contest.

The Big Ten said last week it is re-evaluating its forfeiture policy from August, which gives a sick team a loss if they cancel against a healthy team; if both teams have COVID-19 issues and the game can’t be rescheduled, it’s a no contest.

The number of people a men's or women's basketball team needs for a game ranges from than six scholarship players and a coach in the Big 12 to a minimum of seven in the ACC, Pac-12 and Big East. The SEC requires teams to play if they have seven, while an ACC team can choose not to play even if they have the minimum number of players, though it would be a forfeit.

It wasn't just on the men's side that the Big East had to cancel games. Four women's games were wiped out over the next week as well, with Providence losing its contests at Xavier and Butler. Georgetown lost games against St. John's and Seton Hall.

Other women's games canceled this week include No. 21 Iowa scheduled Thursday game at Penn State, which was called off due to positive COVID-19 tests within Penn State’s program. Fourth-ranked Arizona also saw both its games scheduled for this weekend get wiped out because of COVID-19 issues at Southern Cal and UCLA.

Arizona had been dealing with its own coronavirus problems and hasn't played since Dec. 17.

No. 2 Stanford and sixth-ranked Maryland also had games canceled this week with the Cardinal's contest on Friday against Washington postponed and the Terrapins game at Illinois on Thursday also wiped out.