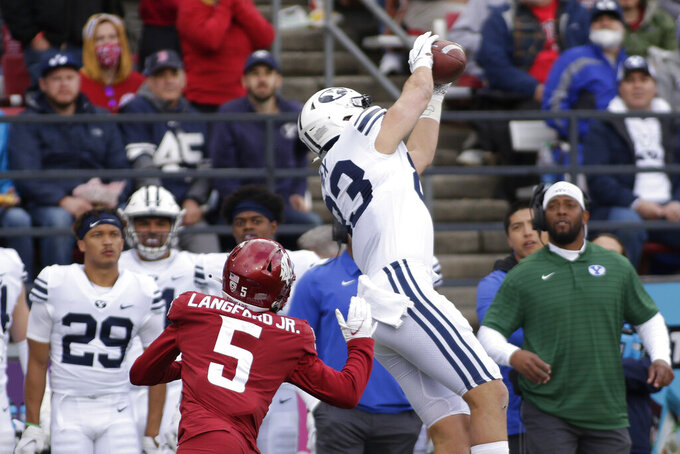 Rolovich and four assistants were fired Monday for not complying with the governor’s mandate that all state employees be vaccinated against the coronavirus. Rolovich had requested a religious exemption that was denied Monday, the state’s vaccination deadline.

He was replaced for the remainder of the season by Jake Dickert, the defensive coordinator who was elevated to acting head coach.

“Our guys had a lot of heart,” Dickert said, praising his team's “effort and commitment.”

“I know it's been a tough week,” Dickert, in his first college game ever as a head coach, said. “It's a little bit learning on the fly. I felt it was really smooth. For the most part we operated as a staff.”

Asked what it was like to be a head coach, Dickert said he had to take a breath and remember to enjoy the experience.

Washington State was were undone by several offensive holding penalties that wiped out good gains, and two failed conversion attempts after touchdowns.

“That put us behind the eight-ball,” Dickert said.

Jaren Hall threw for 143 yards for BYU (6-2), which fell out of the Top 25 this week after losing two straight games.

“A lot of credit to Washington State," BYU coach Kalani Sitake said. "I know they are going through a lot of adversity and change.”

“Looking forward to building on this, and glad we got this win,” Sitake said. "We were coming off a slump.”

But the rest of the first half was scoreless.

BYU missed a field goal and also turned the ball over on downs while in WSU territory in the first half. Washington State quarterback Jayden de Laura, who leads the Pac-12 with 15 touchdown passes, was intercepted while throwing into the end zone to kill one first half drive.

BYU took the opening kickoff of the second half 75 yards in 11 plays. Allgeier scored on a 4-yard run for a 14-7 lead.

Washington State replied immediately, with Borghi scoring on a 1-yard run. But the conversion pass attempt failed and WSU trailed 14-13.

Borghi scored his third touchdown on a 1-yard run up the middle with 4:14 left. But a conversion pass by Lincoln Victor failed and Washington State trailed 21-19.

BYU ran out the clock.

Despite WSU quarterback Jayden de Laura calling on Cougars fans to fill Martin Stadium, only 22,500 fans attended the game in the 32,900-seat stadium.

Jahad Woods had 16 tackles for Washington State ... Borghi's three touchdowns gave him 37 in his WSU career, tied for second most in program history.

BYU is 4-0 against the Pac-12 this season, previously beating Arizona, Utah and Arizona State. The Cougars qualified for a bowl game with the win.

Washington State had trouble scoring after the loss of Rolovich, a master of its complicated run-and-shoot offense. But they showed heart in losing a close game to a tough opponent.