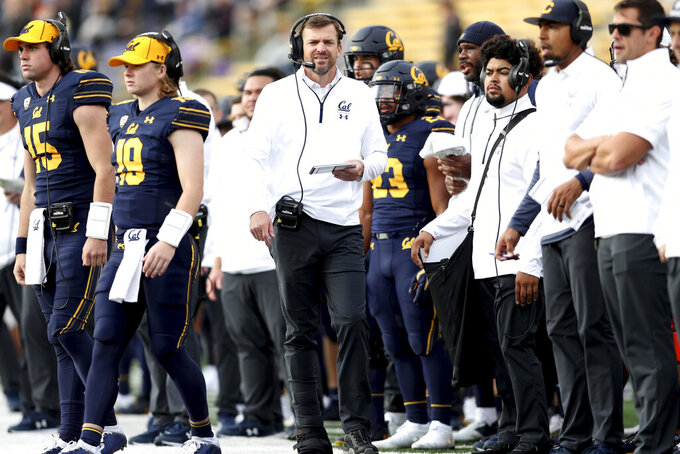 BERKELEY, Calif. (AP) — California coach Justin Wilcox said his team followed all the proper protocols before a COVID-19 outbreak that led to dozens of positive tests and the first postponement of a major college football game this season.

The Golden Bears played last week at Arizona without starting quarterback Chase Garbers and six other starters because of positive tests that knocked out 24 players and assistant coaches. Additional positive tests Tuesday made it impossible for Cal to field a team this week and led to Saturday's game against Southern California to be postponed.

“We have followed the guidelines through the athletic department, the university and the city of Berkeley,” Wilcox said Wednesday. “We have health professionals housed in our building, at our practices, on our planes, in the weight room and the training room. There are people here to help us with all that on a daily basis. Is everybody perfect and following every protocol? I don’t know that I could say that. We do the best that we can.”

The Berkeley Public Health department released a statement Tuesday night saying there was a “ongoing failure to abide by public health measures” that contributed to the 44 lab-confirmed positive tests.

“These simple measures keep people safe,” the statement said. “Failing to do so results not only in individual infections, sickness, and worse, but also threatens the safety of all around them —especially those with compromised immune systems.”

Wilcox didn't respond to those specific charges, saying he didn't want to get into a public spat with the health department.

“I don’t necessarily want to get into a back and forth with the city of Berkeley,” he said. “For me, it’s about having productive communication. I don’t know if that’s overly productive.”

Offensive lineman Valentino Daltoso said players have followed the rules as best as they can and doesn't know why a team with a 99% vaccination rate had an outbreak.

“We have guidelines that are clear to us as players and people in the building. Masking up indoors, in the meeting rooms, when you’re going to get taped and all that kind of stuff,” he said. "I can really only speak for myself. I do the best I can and we go out there, but we are spending a lot of time together playing football every single day, going out to practice and stuff so I don’t know. It’s really difficult to point fingers in a situation like that.

Several players including Garbers have been public in their frustration over what they called a lack of communication and transparency.

Wilcox said he understands that sentiment and believed the communication could have been better on all ends but believes his players are in a better state of mind after the USC game was rescheduled for Dec. 4 instead of canceled.

“The disappointment and frustration which they feel is temporary,” Wilcox said. “I think their attitude today is great. They understand it’s very complicated and difficult. They were great on the field today in terms of coming back out and looking forward to practicing and doing what they love to do. I think they just are are looking forward to the next opportunity to play together again.”

The players who haven’t tested positive have been practicing and Cal is prepared to take enhanced protocols for the rest of the season that include things like regular testing, socially distanced workouts and players getting boxed meals.

Cal is set to play the Big Game against rival Stanford next week and then makes a trip to UCLA before the rescheduled finale against USC.

Wilcox said he's hopeful enough players will be out of isolation by next week to allow those games to be played.