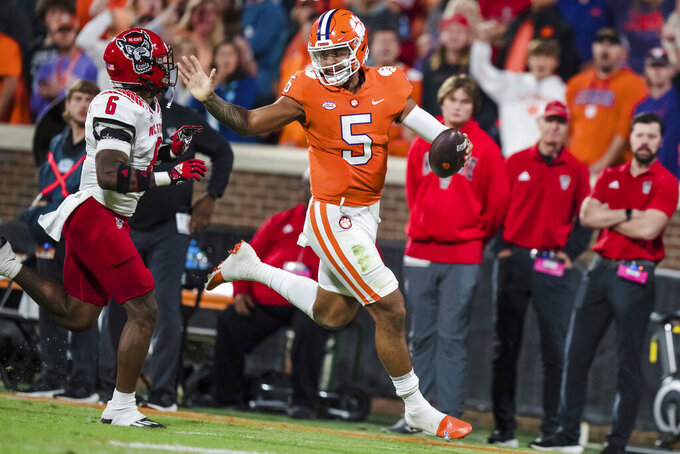 CLEMSON, S.C. (AP) — DJ Uiagalelei looked so confident and smooth that crisp fall afternoon in 2020 in his first college start against Boston College.

Nearly two years later, with the fifth-ranked Tigers (5-0, 3-0 Atlantic Coast Conference) heading to play the Eagles (2-3, 1-2) again on Saturday, Uiagalelei is just as poised — although these days he's armed with the experience of coming through difficult times on the field.

“It was definitely a surreal moment," Uiagalelei remembered. "I had no clue, but it was cool.”

Uiagalelei's initial start came when national championship passer Trevor Lawrence was out with COVID-19. Uiagalelei dazzled that day, throwing for 342 yards and two touchdowns to lead the top-ranked Tigers from 18 points down to a 34-28 victory.

The next week, Uiagalelei passed for 439 yards — the most ever at Notre Dame Stadium — in a 47-40 loss to the Fighting Irish.

Lawrence returned soon after, but Uiagalelei's path was set. He was every bit the star he was projected to be since his early days at California high school power St. John Bosco.

Lawrence became the NFL draft's No. 1 player taken and the Tigers belonged to Uiagalelei.

Uiagalelei's name was atop Heisman Trophy lists, he received lucrative NIL deals and national TV commercials, but things devolved quickly for the 6-foot-5 Uiagalelei in 2021. Clemson lost twice in September and was out of contention for the ACC title, which it had won the previous six years.

Part of the blame was placed on Uiagalelei, who was tentative in his reads and inaccurate with throws. He completed less than 56% of his passes and ended with more interceptions than touchdowns (10 to nine).

Uiagalelei paid no attention to the outsiders and continued to work to get better.

“No one wants to hear someone complain, whine, make excuses for something,” he said this summer. “So, for me, I always want to put my head down and work. Just keep coming out there, keep putting my best effort forward and just working.”

“That's the proudest thing I felt was that DJ didn't blame anyone else,” Negro told The AP by phone. “He took the blame and kept putting the team first like he always has.”

Uiagalelei, despite leading Clemson to a 10-3 mark and six straight wins to end the season, committed to improve. He pledged to lose weight — he dropped about 30 pounds from his peak weight last year to 230 this season — and refine his technique.

Uiagalelei has answered all the questions so far in Clemson's perfect start. He's thrown for 11 touchdowns — more than all of last year — and just one interception. Uiagalelei's completion percentage is up near 66% and he's run for three touchdowns.

“I've never been happier for a guy, the kid deserves it,” Clemson coach Dabo Swinney said after Uiagalelei had five TD passes in a 51-45 overtime win at No. 15 Wake Forest on Sept. 24. “That's the guy we recruited, it's who he was in high school, and all these people forget about him and have written him off like he's some terrible player. He's not."

Negro said Uiagalelei never once lost belief in himself during the offseason. His old coaches and friends out West would tell him, don't worry. “He always assured me, ‘Coach, watch, this season we’re going to be a really good football team,' " Negro said.

With Uiagalelei in charge, the Tigers are among 16 undefeated teams left in college football's Bowl Subdivision and just one of two in the ACC. Gone, as well, are the calls for anyone else but Uiagalelei to lead Clemson's offense.

“It has been a little different because I have been playing a lot better,” Uiagalelei said. “But for the most part I'm trying to keep my head down, keep my circle small, and look to get better each and every day.”