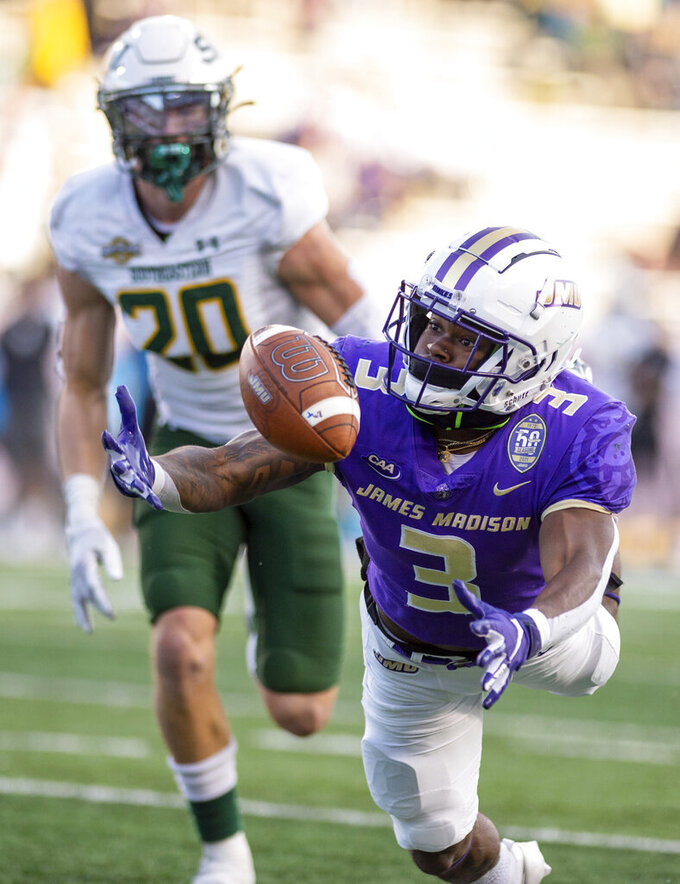 James Madison running back Solomon Vanhorse (3) dives after a pass during the first half of an NCAA college football playoff game against Southeastern Louisiana in Harrisonburg, Va., Saturday, Dec. 4, 2021. (Daniel Lin/Daily News-Record Via AP) 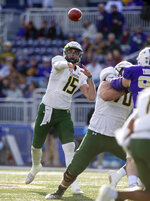 HARRISONBURG, Va. (AP) — Cole Johnson passed for five touchdowns, ran for a sixth and James Madison scored 17 points after three takeaways in the last three minutes of the first half to defeat Southeastern Louisiana 59-20 in the second round of the FCS playoffs on Saturday.

The third-seeded Dukes (11-1), ranked No. 2 in the FCS coaches poll, take on No. 5-ranked and sixth-seeded Montana in the quarterfinals Dec. 10-11. The NCAA Selection Committee was to meet Saturday night to set the date.

Saturday's game, played before 11,743 at Bridgeforth Stadium, hinged upon a 17-point surge in about the last 170 seconds of the first half.

Before: The contest was a fairly tight 21-13 late in the second quarter.

After: James Madison went into halftime ahead 38-13 after three turnovers — a Cole Kelley fumble and two interceptions — led to two one-play touchdown drives and an Ethan Ratke 25-yard field goal.

After the fumble recovery, Johnson threw a 21-yard scoring pass to Antwane Wells in the end zone. After the first interception, Johnson took off on a 35-yard keeper to score.

The Dukes opened the second half with Diamonte Tucker-Dorsey returning a third Kelley interception 43 yards for a touchdown and the route was on. Tucker-Dorsey had two interceptions in the game along with five solo tackles and a sack.

Wells finished with 123 yards and three touchdowns on six catches.

Kelley, the reigning Walter Payton Award winner, went 36-for-50 passing for 397 yards and two touchdowns against three picks. Austin Mitchell had nine catches for 129 yards and a touchdown for Southeast Louisiana (9-4).

The TD pass to Mitchell gave Kelley an FCS-record 399 completions this season, breaking the record held by Taylor Heinecke of Old Dominion, now with the Washington Football Team of the NFL.

JMU's Johnson and Ratke are among four so-called super seniors, who have taken an extra year of eligibility offered during the COVID-19 pandemic, who were freshmen on JMU's 2016 national championship team.