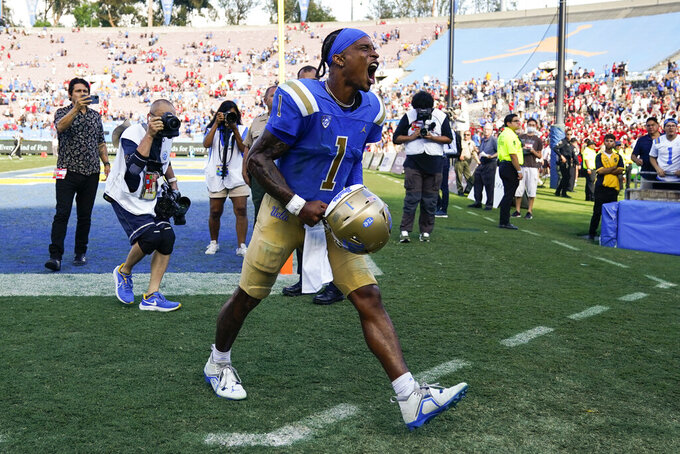 The Pac-12 has not had a game like UCLA-Oregon in four seasons, and only two of them over the last nine.

The ninth-ranked Bruins visit the No. 10 Ducks on Saturday in the first regular-season meeting of Pac-12 teams ranked in the top-10 of the AP poll since 2018.

The last time the conference had a top-10 game in the regular season was No. 10 Washington's 28-15 victory against No. 7 Washington State in an Apple Cup that decided the Pac-12 North — which is no longer a thing.

The Pac-12 dumped its divisions this season so it's possible UCLA (formerly in the South) and Oregon (formerly in the North) could meet again in Las Vegas. For now, the winner moves into sole possession of first-place in the Pac-12.

That's good enough to make it this week's most intriguing game as the second half of the season begins with five ranked-on-ranked games.

This is the third time Bruins coach Chip Kelly has faced his former school, and also the third time it has been at rowdy Autzen Stadium. The Bruins lost the first two, but are far better now as Kelly's plan has come to fruition behind QB Dorian Thompson-Robinson and RB Zach Charbonnet. The Ducks have been rolling since getting thumped by Georgia in their opener, with Auburn transfer Bo Nix (20 touchdowns) leading the way.

Second straight huge home game for the undefeated Horned Frogs after they rallied in the fourth quarter against Oklahoma State last week to emerge as the only unbeaten Big 12 team heading into the back half of the season. But don't forget the Wildcats, who haven't lost in the conference yet and bring the best defense in the league to match TCU's top-ranked offense.

No. 7 Mississippi at LSU

The Rebels have reached the top-10 running through a manageable first-half schedule, but the back half has a much higher degree of difficulty. Ole Miss has not won in Baton Rouge since 2008. The Tigers have been all over the place in Brian Kelly's first season, but there is some high-end talent scattered about a rebuilding roster.

Minnesota at No. 16 Penn State

A humbling loss at Michigan has Penn State fans anxiously bracing for another second-half slide heading into the annual whiteout game. There is also uncertainty about Penn State QB Sean Clifford's health, which could provide an opportunity for heralded freshman Drew Allar. The Gophers have lost two straight, but hope to have QB Tanner Morgan back from injury.

No. 21 Cincinnati at SMU

The Bearcats fell out of the rankings after an opening loss at Arkansas, and have quietly taken care of business since. They're not CFP contenders this season, but they still might be the best of the American Athletic Conference, which is about to enter a fun championship stretch that could still involve the Mustangs.

ACC orange rivals have played some close games in recent years, but the Tigers have won eight of nine since 'Cuse joined the conference ... CLEMSON 27-16.

Getting ranked for the first time since 1998 was hard for the Green Wave; staying ranked could be even tougher against a tricky closing schedule ... TULANE 24-20.