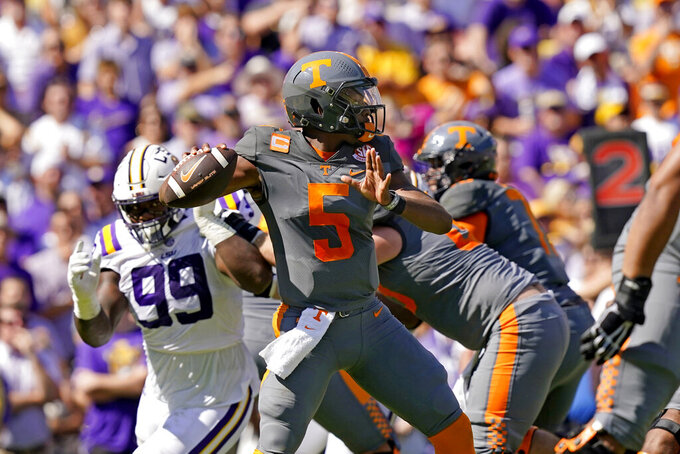 With a season-high six games matching teams ranked in the AP Top 25, the season should have more clarity come late Saturday night.

Each of the Power Five conferences has at least one ranked-vs.-ranked matchup, six top-10 teams are involved in the big games and three of them pit an unbeaten against an unbeaten.

Instead of the five most intriguing games this week, let's just rank the six big ones by level of intrigue:

Early signs point toward Heisman Trophy winner Bryce Young (shoulder) being back in action for the Crimson Tide. Tennessee is trying to snap a 15-game losing streak in the Third Saturday of October rivalry. It is simply an enormous opportunity for Tennessee to reshape the SEC and national championship race. LINE: Alabama by 7 1/2. PICK: Alabama 34-23.

No. 7 Southern California at No. 20 Utah

The Trojans' 6-0 start in Lincoln Riley's first season has been impressive, but it is fair to say USC's ceiling is still a mystery. The Utes came into the season as the Pac-12's presumptive favorites and already have two losses. Still, this will be USC's toughest test yet. LINE: Utah by 3 1/2. PICK: Utah 34-28.

The Wolverines have handled their business about as decisively as any team in the country (32 point margin of victory on average), but they have yet to play a ranked opponent. Then again, neither has Penn State. The winner assumes the title of biggest threat to Ohio State in the Big Ten. LINE: Michigan by 6 1/2. PICK: Michigan 28-20.

The winner takes sole possession of first-place in the Big 12 and becomes the conference's lone unbeaten team, which might not sound all that important this early in the season but it's a really nice place to be in what figures to be a tight race. LINE: TCU by 3 1/2. PICK: TCU 36-35.

Clemson has already cleared out N.C. State and Wake Forest among the ACC Atlantic contenders. The Orange remain undefeated and whether they are a serious challenger to the Tigers remains to be seen. Status of Wolfpack QB Devin Leary (throwing arm) is uncertain because of injury. LINE: Syracuse by 3 1/2. PICK: North Carolina State 20-16.

The Bulldogs are a second-half collapse against LSU away from being unbeaten, but they could be the second-best team in the SEC West behind QB Will Rogers (22 TD passes). The Wildcats have lost two straight, including last week without injured QB Will Levis (foot). LINE: Mississippi State by 7. PICK: Mississippi State 24-21.

The rest of the games involving ranked teams with lines from FanDuel Sportsbook:

Tigers have won six straight against the 'Noles, all but one by at least 10 points ... FLORIDA STATE 31-29, UPSET SPECIAL.

Tigers have gone four straight games without scoring more than 17 points, their longest such streak since five in a row in 1999 ... OLE MISS 31-14, BEST BET.

Sooners defense has been a mess, but the offense could return if QB Dillon Gabriel is healthy ... OKLAHOMA 34-28.

No discussion about whether Texas is back can happen until it snaps a three-game skid against the Cyclones ... TEXAS 28-14.