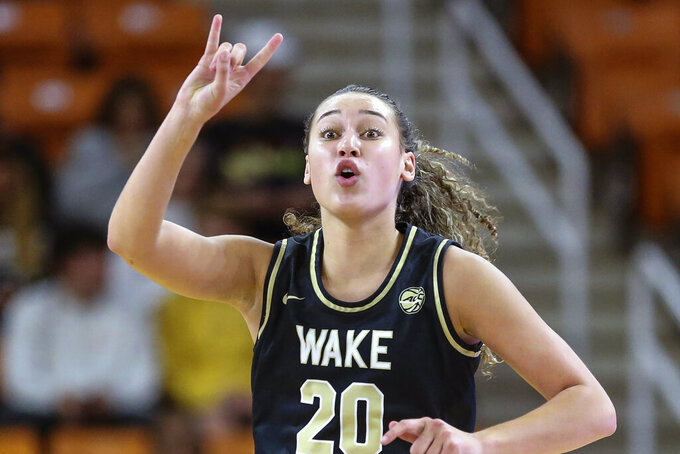 FILE - Wake Forest forward Olivia Summiel (20) gestures during an NCAA college basketball game against Mercer on Tuesday, Nov. 9, 2021, in Macon, Ga. The NCAA is allowing teams to play and practice on election day after making it a mandatory off day the past two years for athletes to participate in civic engagement. “We had these discussions to give athletes the most flexibility as possible,” said Wake Forest basketball player Olivia Summiel., who is on the Student-Athlete Advisory Committee. (AP Photo/Gary McCullough, File)

The NCAA is allowing teams to play and practice on Election Day after making it a mandatory off day the past two years to allow athletes to participate in civic engagement.

The move came on the recommendation of the Student-Athlete Advisory Committee, which called for allowing athletes who are in season to have activities on Election Day if they are provided another day off in the 15 days before or after that date for civic engagement opportunities.

“We had these discussions to give athletes the most flexibility as possible,” said Wake Forest basketball player Olivia Summiel, who is on the SAAC. “Civic engagement isn’t just going to vote. It's getting involved in your community. Definitely laying out different ways of what can we do to fulfill this. It leaves teams flexibility to fill that void.”

The amended rule was passed in June. Many athletes use absentee ballots.

There are 11 men's basketball games next Tuesday, including No. 8 UCLA hosting Sacramento State. There are also 10 women's games, including a marquee matchup of No. 5 Tennessee visiting No. 14 Ohio State.

“Much of it had to do with availability here and what worked for both us and Tennessee," Ohio State coach Kevin McGuff said. “Ours is a later game (8:30 p.m. tip) so it gives people plenty of time to do their civic duty and vote.”

The first day for teams to officially start playing games is Monday. No. 11 Indiana is also playing on Tuesday because the men's team is playing on Monday and the school doesn't do doubleheaders with the two teams. The Hoosiers used Oct. 27 as their civic engagement day.

Wake Forest is playing on Monday. Summiel said her team had a variety of civic engagement activities planned over the next week.

“We are discussing participating in a march to the polls event,” Summiel said. “The team will march from our athletic facilities to the church across the street where they hold registration to vote. We want to take it on as a team and gather people within campus on our way there to get people registered there.”

Summiel also said the athletic department is having a speaker that night on campus for all the teams.

While there are nearly two dozen college basketball games next Tuesday, the NBA is taking the night off after every team plays the night before. The NBA is hoping teams use that night as an opportunity to encourage fans to get out and vote, plus amplify the need for civic engagement.

There are 11 NHL games on election night, including three in Canada. There are also three college football games being played that night.