College media rights: What has happened and what's next? 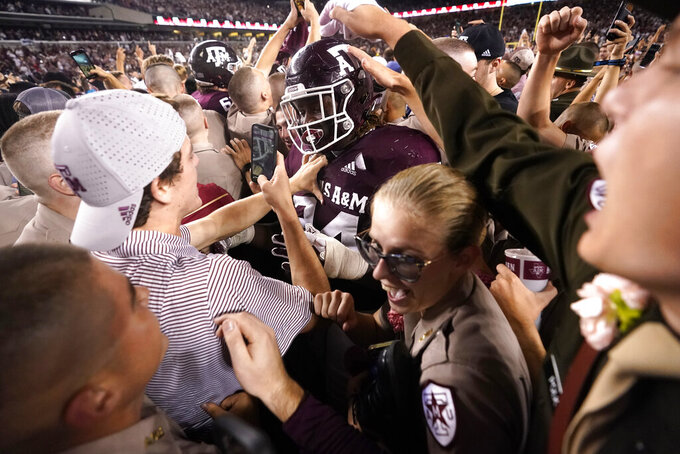 FILE - Texas A&M students celebrate with Texas A&M defensive lineman Isaiah Raikes (34) as they packed Kyle Field after upsetting Alabama 38-41 in an NCAA college football game on Oct. 9, 2021, in College Station, Texas. The “Beef Bowl,” which draws from comments Aggies coach Jimbo Fisher and Crimson Tide coach Nick Saban made about each other over concerns about NIL after Fisher brought in one of the top recruiting classes in history. (AP Photo/Sam Craft, File)

The Big Ten Conference's, seven-year deal with Fox, CBS and NBC has not only set the benchmark for college sports rights, it has established the latest ground rules for realignment.

With the additions of Southern California and UCLA in 2024, the conference will have schools in the nation's top three media markets and in every time zone from coast to coast. Whether other conferences follow the Big Ten's lead will start to be known over the next couple years.

Since realignment can cause outlooks to change, here’s what we know about the current collegiate landscape and what might happen in the future:

WHY IS TV MONEY SO IMPORTANT TO COLLEGE ATHLETICS?

Television rights — the right to broadcast or stream conference games, NCAA tournaments and the College Football Playoff, for example — have become the leading source of revenue for the Power Five conferences, supplanting ticket sales and donor contributions. With fewer funds available from student fees or state assistance, media rights provide some certainty due to the length of contracts.

“The rule of thumb is that football drove 80-85% of the rights. It is now 85-90%,” said Jeff Nelson, the president of Navigate, a market research company with clients in sports and entertainment. “With the way football produces the type of viewership numbers, it is more crucial to have football rights.”

HOW BIG ARE THE CONTRACTS NOW?

The Big Ten will be the first to receive at least $1 billion per year in its deals with Fox, NBC and CBS. If the Big Ten remains at 16 schools in 2025, each program will get at least $162.5 million from conference rights.

WHICH CONFERENCES AND NETWORKS ARE AT THE FOREFRONT?

The Big Ten and Southeastern conferences. Fox has emerged as a power player in college sports with its relationship with the Big Ten, starting with the two joining forces to form the Big Ten network in 2006. At the other end is ESPN, which will have all SEC programming in 2024 when it takes over the CBS Saturday afternoon football package that is worth $3 billion over 10 years.

WHAT ARE THE IMPACTS ON OTHER LEAGUES?

There will likely be another flurry of realignment. The Big Ten could expand to 20 and the SEC could counter by attempting to raid the ACC, even though the conference's grant of rights agreement levies huge financial penalties if a school tries to leave early.

Notre Dame will have a lot to say about the future. Will it finally join a conference in football, especially now with NBC, its longtime broadcast partner, teaming up with the Big Ten or will it remain an independent?

The Pac-12 and Big 12 each have their deals expiring soon. The Pac-12's ends in 2024 and the conference has already started negotiating as it tries to prevent more schools from leaving. The Big 12's ends in 2025 and it will have a more diverse roster with Cincinnati, Houston, Central Florida and BYU joining the next couple years to replace Texas and Oklahoma, which will be in the SEC by then.

If the Big Ten added three or four Pac-12 programs, that would put the Big 12 in position to snap up most of the remaining schools. Goodbye Power Five and hello Big Four.

Navigate projects all of the Power Five programs to earn at least $50 million from media rights by 2028, but most will still be far behind the SEC and Big Ten.