Colorado AD wants next head coach to share his commitment 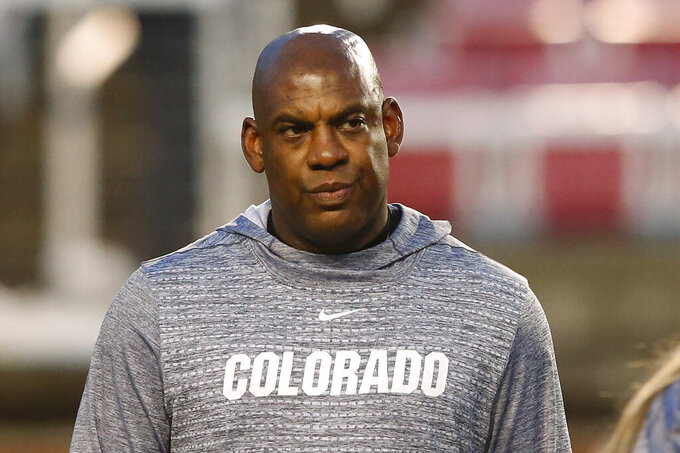 FILE - In this Nov. 30, 2019, file photo, Colorado head coach Mel Tucker looks on before the start of their NCAA college football game against Utah, in Salt Lake City. A person familiar with the decision says Colorado coach Mel Tucker has agreed to lead Michigan State's football program. The person spoke Wednesday morning, Feb. 12, 2020, to The Associated Press on condition of anonymity because the hiring had not been announced. (AP Photo/Rick Bowmer, File)

BOULDER, Colo. (AP) — After Mel Tucker's midnight blindside, Colorado athletic director Rick George says the Buffaloes' next head football coach has to share his passion for the university and the state.

Someone who isn't going to look recruits, parents, players and administrators in the eye and say he's their guy one minute, then bolt for more money and bigger budgets the next, leaving the program to pick up the pieces.

After going 5-7 in his first season in Boulder, Tucker did an about-face this week and accepted the Michigan State job after a long day of reinforcing his commitment to Colorado through a media blitz and meetings with donors and alumni.

George named Darrin Chiaverini , who spearheaded the Buffs' top-35 recruiting class this year, as interim head coach Wednesday, a move that adds stability and continuity amid the stunning departure of Tucker, who doubled his salary by leaving for Michigan State but now serves as the freshest face of what ails college football.

"I have a lot of confidence in Darrin to lead us through this interim period," George said. "He has been associated with the program beginning with his playing days 25 years ago and cares deeply about the Buffs."

Chiaverini, 42, certainly checks the boxes George has in mind for the next head coach: He just completed his fourth year as wide receivers coach at CU and Rivals.com named him one of the top 25 college football recruiters in the country for the third consecutive year.

Chiaverini seemed to make a pitch at the full-time gig when he said, "This campus and the city of Boulder is where I grew up as a young man, and there's no better place to be than CU. The pride and tradition of the Colorado Buffaloes is something every student-athlete, like myself, in the country should experience."

Chiaverini, who lettered four times as a wide receiver under coach Rick Neuheisel from 1995-98, returned to his alma mater in 2016 after serving two seasons as wide receivers coach at Texas Tech. He served three seasons as co-offensive coordinator and recruiting coordinator under former head coach Mike MacIntyre. When Tucker replaced MacIntyre, he kept Chiaverini on staff and promoted him to assistant head coach.

Chiaverini's status as interim head coach should keep the recruiting class and roster largely intact as George and Carl conduct their search for someone who is committed to the Buffs and whom they're convinced will stay, a search that may very well lead them back to Chiaverini.

Other names making the rounds as potential candidates:

ERIC BIENIEMY, Kansas City Chiefs offensive coordinator. The Buffs' career rushing leader has had two stints as an assistant at CU and has spent the last seven years with the Chiefs. He's expected to follow ex-Chiefs OCs Matt Nagy and Doug Pederson into the NFL head coaching ranks if he stays in KC.

RYAN WALTERS, Missouri defensive coordinator. A standout safety for the Buffaloes from 2004-08, Walters was voted team captain and MVP his senior season. He's also had stops as an assistant at Colorado, Arizona, Oklahoma, North Texas and Memphis.

TIM DeRUYTER, Cal defensive coordinator. The former Air Force player and assistant coach drew strong interest from CU while he was at Fresno State, where he went 31-30 in five years. A collegiate coach for three decades, DeRuyter has engineered a dramatic turnaround of the Golden Bears.

DAVE LOGAN, Denver Broncos play-by-play announcer and high school coach. The ex-Buffs multi-sport star has won eight state football titles with four schools. His NFL career included nine years as a wide receiver for the Browns and Broncos and 31 years as voice of the Broncos.

TROY CALHOUN, Air Force head football coach. Calhoun is coming off his best season in his 13 years at the Academy, an 11-2 mark and a No. 22 finish. His Falcons handed the Buffs a loss in Boulder, one that ultimately kept Tucker from a .500 record and a bowl berth in his only season at CU.

ANDY AVALOS, Oregon defensive coordinator. A star linebacker at Boise State, Avalos got his start in coaching as a graduate assistant in Boulder from 2006-08. He spent seven seasons at Boise State. In his first season at Oregon, the Ducks ranked among the 10 stingiest defenses in the country.

Other intriguing names with no ties to Colorado include:

BUTCH JONES, Alabama offensive analyst. Jones was considered for Colorado's job in 2012 but chose Tennessee. He's 84-54 in 11 seasons as a college head coach (Central Michigan, Cincinnati, Tennessee) and was considered for the Rutgers and Colorado State openings this year.