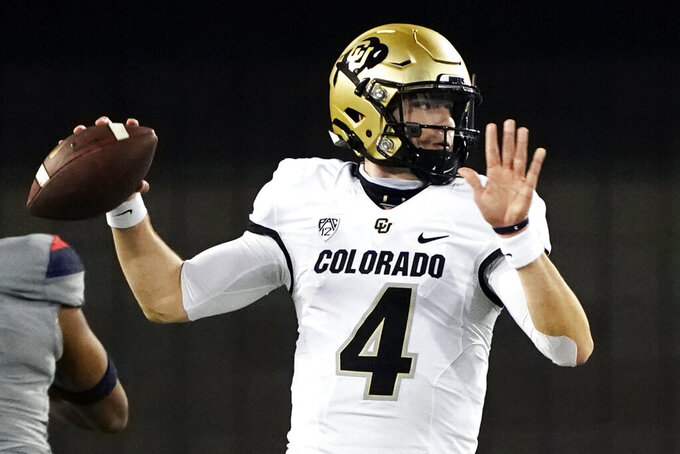 FILE - Colorado quarterback Sam Noyer (4) looks to pass against Arizona in the first half of an NCAA college football game against Arizona in Tucson, Ariz., in this Saturday, Dec. 5, 2020, file photo. Noyer has entered the transfer portal for a second time to close a career in Boulder that included three head coaches and a brief switch to safety. Noyer led the Buffaloes to a 4-2 record last season under first-year Colorado coach Karl Dorrell and a berth in the Alamo Bowl.(AP Photo/Rick Scuteri, File)

Colorado starting quarterback Sam Noyer has entered the transfer portal for a second time to close a career in Boulder that included three head coaches and a brief switch to safety.

Noyer led the Buffaloes to a 4-2 record last season under first-year Buffaloes coach Karl Dorrell and a berth in the Alamo Bowl.

Originally part of the 2016 recruiting class under then-coach Mike MacIntyre, Noyer redshirted and then was a backup QB for two seasons before switching to the defensive side in 2019 under coach Mel Tucker, who is now at Michigan State. All set to transfer after the '19 season, Noyer was convinced to come back after Dorrell was brought on board. Noyer won the starting job out of camp and helped the Buffaloes to a 4-0 start, along with a spot in the polls. The Buffaloes lost to Utah in the regular-season finale and then Texas in the Alamo Bowl.

“Sam came back when he didn’t have to after graduating over a year ago and helped the program greatly get back on the right track,” Dorrell said. “As a veteran, he offered us some stability and depth at the position. We all wish him well and while we’re sad to see him leave, the parting is certainly amicable.”

“The season was everything I thought it would be and more," said Noyer, who earned second-team All-Pac-12 Conference honors. "So now I’m looking forward to a new opportunity and a fresh start, a place where they need a veteran quarterback who has the added experience of playing on both sides of the ball.

“It’s not that I felt that I wasn't needed at CU, I just want a new opportunity, hopefully in Division I and even in the Pac-12 if possible, knowing that I can compete at a high level in a power 5 conference,” he added. “But I am willing to go wherever I can play that will help make me better and give me an opportunity to fulfill my dream to play in the NFL.”

His departure leaves the Buffaloes with five QBs on the roster, including three on scholarship. Brendon Lewis saw action in the bowl game, throwing for 95 yards. He also rushed for 73 yards and a score. There's also J.T. Shrout, a transfer from Tennessee, and Drew Carter. Grant Ciccarone and Jordan Woolverton are walk-ons.