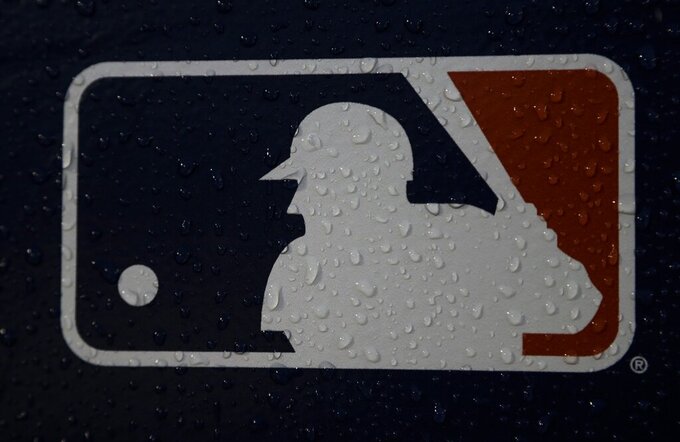 FILE - A rain-covered logo is seen at Fenway Park before Game 1 of a World Series baseball game between the Boston Red Sox and the Los Angeles Dodgers Tuesday, Oct. 23, 2018, in Boston. The clock ticked down toward the expiration of Major League Baseball’s collective bargaining agreement at 11:59 p.m. EST Wednesday night, Dec. 1, 2021, and what was likely to be a management lockout ending the sport’s labor peace at over 26 1/2 years. (AP Photo/Matt Slocum, File)

ATLANTA (AP) — Baseball's last labor dispute was devastating, but the comeback had two big things working in its favor.

The sport won't be so fortuitous if this lockout lingers into the spring.

For the national pastime to maintain some semblance of its former glory, we better be talking about WAR and slash lines instead of the CBA and luxury tax rates by the time the Super Bowl is over.

The brouhaha that came to a head this week with the owners locking out the players is a mere sideshow at the moment, overshadowed by the NFL playoff races and the biggest games of the college football season.

With basketball and hockey also ramping up, there's plenty to keep sports fans distracted for the next couple of months while the two sides haggle over the details that most of us couldn't care less about.

“This is peak college football season, and the NFL has all sorts of cool narratives,” said Mike Lewis, a marketing professor at Emory University in Atlanta. “This is a good time from a strictly negotiation point of view for the owners to play a little hard ball."

All that changes if an agreement hasn't been reached by mid-February, when the dawn of spring training still serves as a symbolic end to the long, dark winter.

The situation is even more tenuous with baseball still trying to bounce back from the COVID-shortened 2020 season, which was played largely in empty stadiums.

“Losing two out of three opening days would be brutal,” Lewis said.

Some will argue the sport never fully recovered from its last labor dispute, which wiped out the 1994 World Series and dragged on for nearly eight months.

They're probably right, but baseball caught a huge break when two compelling storylines lured many leery fans back to the ballparks.

First, there was Ripken's pursuit of one of the most hallowed records in all of sports.

In September of 1995, just five months after the strike petered out, Ripken broke Lou Gehrig's mark by playing in his 2,131st consecutive game. It was a moment that mesmerized the nation, and undoubtedly healed some of the game's self-inflicted wounds.

Coming off the strike, baseball conveniently looked the other way while its hitters transformed themselves into Incredible Hulks.

The ball started flying over the fence at a stupefying rate, culminating in the home-run derby between Mark McGwire and Sammy Sosa that captivated the nation through the summer of 1998.

We know now that it was nothing more than a chemically enhanced farce, forever sullying the reputations of McGwire, Sosa and anyone else who thrived during the Steroids Era, including career home run leader Barry Bonds.

But at the time, the McGwire-Sosa duel was just what baseball needed to lure back even more of its fan base.

It's hard to envision a similar scenario this time around.

For one, the game's popularity is even more diluted than it was a quarter-century ago. Many young people have turned away from baseball, viewing it as staid and old-fashioned in an increasingly fast-paced world filled with shinier entertainment options.

Anyone who has sat through a four-hour-plus game — filled largely with players going through meaningless gyrations instead of any real action — would find it hard to counter that viewpoint.

Lewis recently conducted a survey that looked at the evolving state of sports fandom in America.

Every sport has taken a hit, he said, but baseball “has essentially crashed” among Generation Z, those born since the last labor stoppage.

“It's really a mismatch on multiple levels,” he said. “That generation wants to look at content on their phone. They want to get their highlights on Instagram and TikTok. Baseball is built on local markets and people sitting in a stadium for three or four hours. The technology, the marketing of the game — whatever it is — has really created a disconnect with young people, and particularly young males, in baseball.”

Also, the baseball stars of the 1990s were more prominent figures than today's players.

Ripken's wholesome image propelled him to almost mythical proportions as he pursued the Iron Horse's record. McGwire and Sosa appeared together as Greek gods on the cover of Sports Illustrated.

In today's far more complex media landscape, baseball's biggest names — whether it's Mike Trout or reigning MVPs Shohei Ohtani and Bryce Harper — simply don't have the gravitas of those in other sports.

Lewis pointed out that NBA star LeBron James has 103 million followers on Instagram.

"The 1990s was a different media era. The coverage was very concentrated,” Lewis said. “It was also an era where Major League Baseball personalities were still at the level of superstars in other leagues. In the pre-social media era, Barry Bonds and Mark McGwire were as big as anybody in the NBA or the NFL. That's not the case anymore.”

There's another obstacle that baseball faces, even without a labor dispute.

Baseball — unlike every other sport, with the possible exception of the NHL — is not nearly as attractive to watch as it was decades ago.

Not only are the games longer, but front offices driven mainly by analytics have created 30 cloned franchises — teams all playing essentially the same style, with an emphasis on homers and defensive shifts and constant pitching changes.

There is no longer room in today's homogenized MLB for a World Series like the one in 1982, which matched a homer-happy Milwaukee Brewers team known as “Harvey's Wallbangers” against a St. Louis Cardinals team that emphasized speed and defense.

Led by sluggers Gorman Thomas, Ben Oglivie and Cecil Cooper, the Brewers hit 216 homers that season. The Cardinals had just 67 — only two players even reached double figures — but they knocked off Milwaukee in a seven-game World Series.

Baseball does have some advantages over other sports, Lewis said.

“Sure, baseball has some challenges with an older fan base,” he said. “But baseball also has more kids going to major league parks than any other professional league. There's more of a family connection in baseball. It's a game that almost has more of a wholesomeness to it than other sports. That's got some power.”

If baseball wants to maintain that connection, it needs to settle this labor dispute before anyone really notices.

The day after the Super Bowl.

Paul Newberry is a national sports columnist for The Associated Press. Write to him at pnewberry(at)ap.org or at https://twitter.com/pnewberry1963 and check out his work at https://apnews.com/search/paulnewberry