Column: Enjoy a couple of months without Bama and Nick Saban 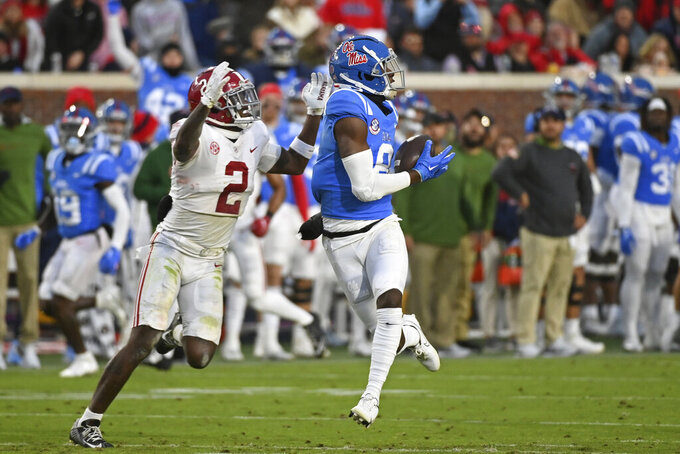 The Alabama Crimson Tide will play a football game Saturday that means ... well, absolutely nothing.

It's just the way things work in Tuscaloosa.

The Southeastern Conference championship is out of reach. All hope of claiming a spot in the College Football Playoff is gone. Which means there's no chance of Bama winning its seventh national title since Nick Saban arrived 15 years ago.

Which means, of course, that the season is effectively over for the Tide.

Just how momentous of an occasion is this for the greatest dynasty in college football history?

One must go all the way back to Nov. 13, 2010, for the last time Alabama played a regular-season game sans impact on the national championship race.

Since that day more than a dozen years ago, the Tide has hoarded five national titles, finished as the runner-up three other times, and lost in the semifinals the first year of the playoff. The other two seasons, Bama was eliminated from the title race by gut-wrenching defeats at the hands of rival Auburn in the regular-season finale.

With two losses — gasp! — already this season, Alabama will trot on the field at Bryant-Denny Stadium for an expected beatdown of Austin Peay, relying on motivational goals that are generally reserved for the common folks.

“We’ve still got goals we’d like to reach,” linebacker Jalen Moody insisted, without naming them. "We’ve got to go out there and prepare every day so we can go out the way we came in. We can’t win a championship now, but we’ve still got to finish the right way.”

Alabama's elimination is good news for the rest of the nation, which had grown weary of spending most every January watching Saban's behemoth win, or at least contend, for championships.

Then again, it seems a good time to add some perspective to just what an amazing run this has been for the Tide:

—The last time Alabama played a meaningless regular-season game, Barack Obama was approaching the midway point of his first term and less than two weeks removed from a huge Democratic defeat in the midterm elections.

—The last time Alabama played a meaningless regular-season game, the Miami Heat's “Big Three” — LeBron James, Dwyane Wade and Chris Bosh — were off to a sluggish 5-4 start in their first season together.

—The last time Alabama played a meaningless regular-season game, people still used BlackBerry phones, hailed a cab when they needed a ride, read a newspaper to figure out what was going on in the world, and shopped at places known as malls.

—The last time Alabama played a meaningless regular-season game, Tom Brady was a mere child of 33 and the Buffalo Bills were 0-8 at the midway point of the NFL season.

—The last time Alabama played a meaningless regular-season game, Ke$ha had the No. 1 song in the land with “We R Who We R" and “Megamind” was the top-grossing movie.

—The last time Alabama played a meaningless regular-season game, Donald Trump was hosting “The Apprentice” and most of us had never heard of Elon Musk.

Some are wondering — hoping might be a better word — that this slight dip of a season is a sign that Saban's grip on the game is loosening.

He just turned 71. Nothing lasts forever.

Sorry, that's just wishful thinking. While undoubtedly a disappointing season by Alabama's standards, the two defeats came on a last-second field goal at Tennessee and a 2-point conversion at LSU in overtime.

The Tide is just four points away from being undefeated and right back in the thick of things. Come 2023, there's no reason to think the school won't be one of the leading title contenders again.

For now, Alabama still has next week’s regular-season finale — the Iron Bowl against Auburn — to stir its competitive fire.

Depending on how things shake out, the Tide could end up in a major bowl, though it’s hard to envision future NFLers like quarterback Bryce Young and linebacker Will Anderson risking injury to play in a postseason game that doesn’t really matter.

These days, Saban sounds more like a motivational speaker than a football coach. He figures the last few games, as hollow as they truly are, will go a long way toward establishing if this is just a blip in his dynasty or the first indication of a more significant decline.

“Playing this game for what we want to accomplish, what we want to do, re-establish the identity that we want in Alabama football," he went on. "That’s what we’re gonna try to finish and do, and it’ll be interesting to see how players choose to do that."

Just enjoy this rare chance to spend the next couple of months without him.

Paul Newberry is the national sports columnist for The Associated Press. Write to him at pnewberry(at)ap.org.