Column: Why would the ACC. Big Ten, Pac-12 form an alliance? 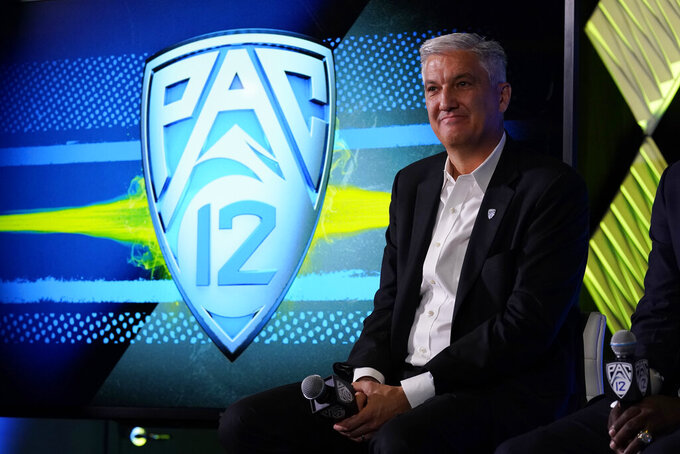 The Atlantic Coast Conference, Big Ten and Pac-12 are exploring ways to counter the Oklahoma-Texas expansion and curtail the Southeastern Conference's growing power in college football.

The commissioners of the ACC, Big Ten and Pac-12 have discussed how creating an alliance between leagues that span the country could provide both financial benefits and policy making pull as the NCAA begins to hand off more responsibilities to conferences.

The discussions were first reported by The Athletic. Two people with knowledge of the discussions confirmed them to The Associated Press on condition of anonymity because no one has been authorized by the conferences to speak publicly about the talks. The conversations were described as conceptual and exploratory.

There are two important events on the horizon that could influence how quickly some type of agreement — formal or otherwise — between the three conferences comes together: The next meeting regarding College Football Playoff expansion is scheduled for Sept. 28. And the NCAA has called for a special constitutional convention that is expected to convene no later than Nov. 15.

There is no obvious precedent in big-time college sports of an alliance of conferences, so this could be whatever the leagues involved make of it.

In this case, there are two areas where the conferences believe working together has potential to fortify all three.

The untapped revenue-generating potential in college football is in creating more big games. Or maybe better described as games between big brands

Of course, those types of games happen already. Oregon is at Ohio State and Washington plays at Michigan on Sept. 11.

An alliance could make those juicy matchups more frequent, with the hope that they unlock more revenue in media rights agreements and ticket sales.

The Pac-12's current TV deals with Fox and ESPN expire in 2024 and new commissioner George Kliavkoff's job is to figure out how to increase both revenue and exposure for a league that has been falling behind its peers in both.

The ACC has the opposite issue, locked into its exclusive deal with ESPN until 2036. New commissioner Jim Phillips is charged with finding ways to keep up with the SEC and Big Ten money-making machines in the absence of the bump that would come from going back on the market.

The Big Ten's current deals with Fox and ESPN are up in 2023. Commissioner Kevin Warren is in a more fortuitous position than his counterparts from the Pac-12 and ACC. The Big Ten's value is comparable to the SEC's. Still, there has to be some concern within the conference that the addition of Texas and Oklahoma to the SEC no later than 2025 makes the Big Ten less relevant and lucrative.

The SEC's addition of Texas and Oklahoma gave the conference two more national brands to add to a roster that already includes the star power of Alabama, LSU, Florida, Georgia, Auburn and Texas A&M.

When it happens, the SEC will certainly increase the number of conference games it plays from eight to nine and maybe even 10. Meanwhile, the SEC's new deal with ESPN gives the network exclusive rights to all of its football starting in 2024.

An SEC Saturday could include enough high-profile games, with prime slots on ESPN platforms, including the 3:30 p.m. ET showcase on ABC, that it overshadows the rest of college football.

A game of the week featuring some combination of the best teams in the other three conferences is a potential way to push back.

The College Football Playoff expansion plan now under discussion was created by the commissioners of the SEC, the Big 12, the Mountain West and Notre Dame's athletic director.

Barely two months after the 12-team plan was unveiled, SEC Commissioner Greg Sankey announced the conference was inviting in Oklahoma and Texas, crippling the Big 12 and creating a path to turning an expanded CFP into a mini-SEC tournament.

The SEC's power play has not gone over well in other conferences.

An alliance between traditional Rose Bowl partners, the Big Ten and Pac-12, along with the ACC could be a way of containing the SEC's growing influence over college football.

The first step could be banding together to ensure the media rights for the new CFP format is brought to market instead of negotiating exclusively with ESPN. Unless ESPN can be persuaded to give up its window of exclusivity that might require waiting until the 2026 season to implement the 12-team format.

The upside? Multiple TV partners could not only increase the value of the CFP, but give other networks more motivation to invest in regular-season college football. Perhaps in something like a yearly ACC/Big Ten/Pac-12 challenge?

Finally, as the NCAA cedes power, conferences will take a bigger role in governance. An alliance between the ACC, Big Ten and Pac-12 could prevent the SEC from setting an agenda the rest of the country is forced to follow if it wants to compete.

In the long run, it could keep conference flagships such as Ohio State, Clemson and USC from deciding — the way Texas and Oklahoma did —- that the only way to compete with the SEC is to join the SEC.