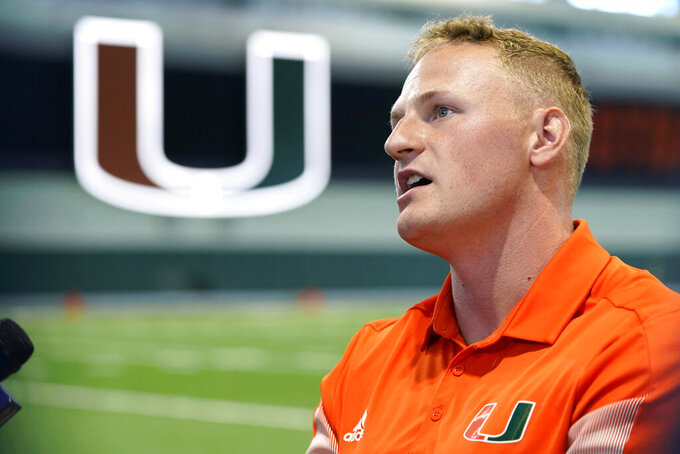 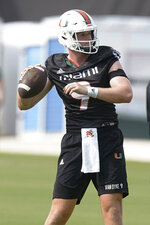 CORAL GABLES, Fla. (AP) — Much was rightly made of Mario Cristobal coming home to take over as coach of Miami, not just his hometown school but also his alma mater.

It’s not a coincidence that Cristobal’s staff is loaded with coaches and analysts who have deep ties to Miami.

Longtime NFL executive Alonzo Highsmith returned to his former school as football’s new general manager. A slew of assistants — including quarterbacks coach Frank Ponce, running backs coach Kevin Smith and assistant head coach Alex Mirabal — are all Miami natives, as is recruiter and former Hurricanes standout Roland Smith. There’s even another Pro Football Hall of Famer in the hallways now to join chief of staff Ed Reed, with longtime Dolphins star Jason Taylor on board as an analyst.

And the symbolism isn’t lost on the players.

“I mean, this is a special place,” quarterback Tyler Van Dyke said. “You see all these names out there. And the history that this place comes with, it’s unbelievable. Those guys want to bring the program back to what it used to be. That’s why those guys are so driven to come back here and build it back.”

The chief builder, of course, is Cristobal -- an offensive lineman on two Miami national championship teams. He was lured home from Oregon after the Hurricanes fired Manny Diaz, whose three-year stint saw him go 21-15. A loss to Florida State, capped by Miami unable to get a stop on a crucial fourth-and-14 play in the final moments, doomed whatever chance Diaz had of keeping his job.

It wasn’t about money for Cristobal. Oregon would have paid him a fortune to stay; Miami gave him a 10-year deal worth in the $80 million range, a contract that isn’t even in the same stratosphere of what the Hurricanes used to pay coaches. The 16th-ranked Hurricanes aren’t hiding that they’re now starting to spend much more on football than ever before, hoping that investment pays off in championship form.

“There’s a lot of work to do,” Cristobal said. “I think it’s clear how much I love Miami. Live and die for it. There are people in this building that feel the exact same way. And because of what we want to accomplish, and where we are currently at, there’s a lot to do.”

Van Dyke took over early last year after quarterback D’Eriq King got hurt, started Miami’s final nine games, won the Atlantic Coast Conference’s rookie of the year award and now finds himself listed as one of the preseason favorites for the Heisman Trophy.

He threw for 25 touchdowns last season, would have hit 3,000 yards if Miami had gone to the Sun Bowl — the Hurricanes had to turn that invite down because of a virus outbreak, so Van Dyke finished the year at 2,931 yards — and starts this season as the team’s unquestioned leader.

The running back room is loaded, but there are questions to be answered at receiver. Miami’s top two catchers from last season — Charleston Rambo and Mike Harley, who combined for 136 receptions, 1,715 yards and 12 touchdowns — departed. Mallory had 30 catches a year ago, making him Miami’s leader among returnees.

Put simply, this is where Miami could separate itself from teams. Safety James Williams returns for his second season and at times was the best player on that side of the ball for Miami a year ago. The defensive line is fast, the defensive back corps is deep and Cristobal is making no secret that Miami’s usual aggression will be on full display.

Cristobal wanted big names when he was shopping for coordinators, and got them. Offensive coordinator Josh Gattis comes from Michigan, and won the Broyles Award a year ago as the nation’s top assistant. Defensive coordinator Kevin Steele — who has been at big-time places like Clemson, Alabama, Auburn, LSU, Tennessee and Florida State — is a past Broyles finalist as well.

Miami is the preseason favorite to win the ACC’s Coastal Division (and be the last Coastal champion, since the conference is dumping the division format starting in 2023). The Hurricanes are the second choice to win the ACC title behind Clemson, according to FanDuel Sportsbook.

It’s not easy. Miami has road games against two teams with legitimate national-title hopes — a Sept. 17 trip to No. 6 Texas A&M, and a Nov. 19 game at No. 4 Clemson. This is also a year where Miami goes to both Virginia and Virginia Tech; the Hurricanes haven’t managed to sweep those trips in three previous tries since 2014. On the plus side, Miami has seven home games, including a Sept. 3 opener against Bethune-Cookman and the annual rivalry matchup on Nov. 5 with Florida State.