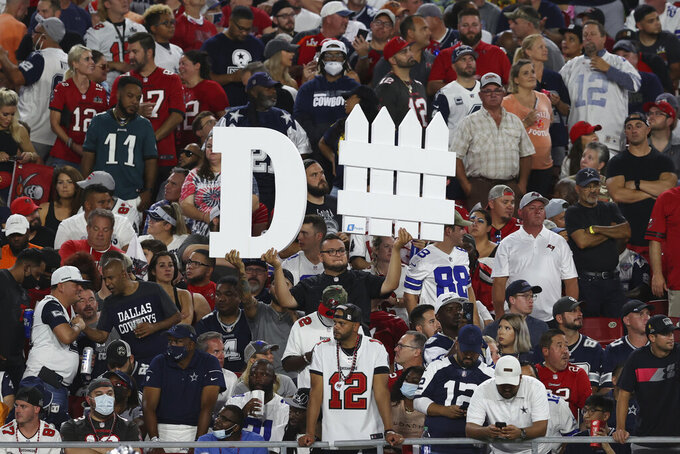 A Tampa Bay Buccaneers fan holds a sign during the first half of an NFL football game against the Dallas Cowboys Thursday, Sept. 9, 2021, in Tampa, Fla. (AP Photo/Mark LoMoglio)

More than 65,000 fans packed a stadium in Tampa to watch Tom Brady lead the Buccaneers to a win in the NFL's season opener, just hours after President Joe Biden announced a sweeping new plan to slow the latest COVID-19 surge.

Most people at the open-air stadium Thursday night didn't wear masks. There was no vaccine requirement for fans, something Biden has urged sports and entertainment venues to impose. Many other football stadiums are taking a similarly lax approach to pandemic measures this fall, and that worries health experts.

The risk of catching or passing a virus that has infected more than 40 million people in the United States will depend on where the stadium is and whether the game is outdoors, among other factors.

HOW RISKY ARE STADIUMS?

It’s difficult to predict how many COVID-19 cases might develop from a single event. That depends partly on infection rates where the venue is located and how many people are vaccinated.

The highly contagious delta variant has triggered a surge in infections this summer that just recently started to taper. The seven-day rolling average for daily new cases in the U.S. sits at about 150,000 after starting September above 167,000, according to Johns Hopkins University.

At those rates, it is “basically a certainty” that there will be at least one infected person at any gathering of a thousand people, epidemiologist Ryan Demmer said.

“At any sort of large event like at a football stadium, without question there will be many infected people there,” said Demmer of the University of Minnesota School of Public Health.

HAS COVID-19 SPREAD AT OTHER EVENTS?

Yes. The Lollapalooza music festival in Chicago drew about 385,000 people in late July. Festivalgoers had to show proof of vaccination or a negative test. Nearly two weeks after the event, city officials reported 203 COVID-19 cases connected to it.

In Wisconsin, health officials have said nearly 500 coronavirus cases may be linked to the crowds that attended Milwaukee Bucks games or gathered outside the arena — estimated as high as 100,000 one night — during the team’s push to the NBA championship.

ARE VENUES TAKING ANY MEASURES?

The NFL doesn’t have a blanket policy for masks or vaccination status for fans. That creates a patchwork of guidelines that each of the 32 teams has developed.

Louisiana State University, a college football powerhouse, has a policy similar to the Saints.

Many teams are asking fans to wear masks indoors but not requiring them while they are in their seats.

Football games are the latest events to resume with full stadiums or arenas, following a summer of concerts, NBA playoff games and baseball.

No. But they are considered safer because air circulates better in them, which can hamper the airborne virus’s ability to spread.

That said, there’s still an “extremely high chance” an unvaccinated and unmasked fan could wind up with COVID-19 if they sit next to an infected person for three hours or so, even outdoors, said Demmer, the epidemiologist.

Most of the NFL’s 30 stadiums are open-air venues.

Four teams have closed roofs — the Detroit Lions, Las Vegas Raiders, New Orleans Saints and Minnesota Vikings — and five have retractable roofs that can be opened or closed.

A stadium that opened last year in Los Angeles and is home to the Chargers and Rams has a canopy-type roof and panels at each end that allow air in and out.

WHAT PRECAUTIONS CAN FANS TAKE?

The biggest measure is becoming fully vaccinated. Doctors say the shots don't eliminate risk, but they lower it considerably, especially when it comes to developing a serious case that requires hospitalization.

“The delta variant is ... so much more contagious that if you’ve got clusters of unvaccinated people, it’s going to rip through them,” said Dr. Amesh Adalja of the Johns Hopkins Center for Health Security.

She noted that masks are not perfect, but they offer some protection. They also prevent people from touching their faces.

“Lots of people touch lots of things in sports arenas,” she noted.

Once fans get to their seat, they should try to stay there as much as possible to minimize contact with infected people, Demmer said.

“Don’t wander around the stadium,” he said. “Try not to stand in a lot of concession lines.”

The epidemiologist said there is no question that crowded stadiums this fall will lead to more infections, but he also realizes that “we can’t live for the next five or 10 years not having large gatherings” because of the virus.

“I just wish everyone would get vaccinated and then we can really move past this once and for all,” Demmer said.