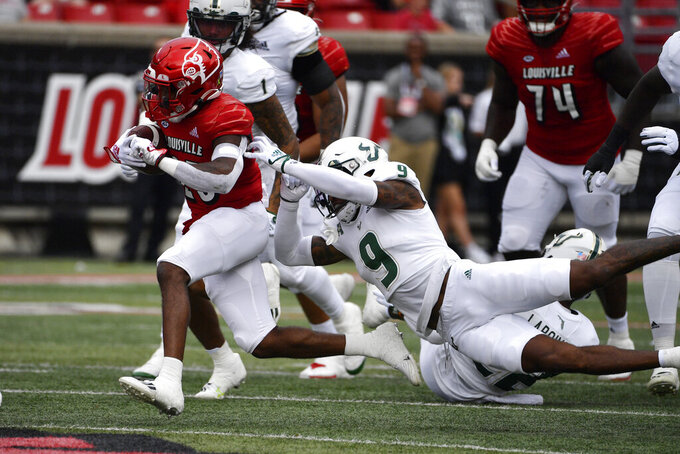 Louisville running back Jawhar Jordan (25) runs from the grasp of South Florida defensive back Aamaris Brown (9) during the first half of an NCAA college football game in Louisville, Ky., Saturday, Sept. 24, 2022. (AP Photo/Timothy D. Easley)

LOUISVILLE, Ky. (AP) — Malik Cunningham ran for three of his four touchdowns as Louisville rolled to a 41-3 win over South Florida on Saturday afternoon.

Cunningham put the Cardinals (2-2) comfortably ahead by halftime with TDs on four of five possessions. He had scoring runs of 35, 40 and 8 yards and tossed a 26-yard TD to senior transfer Jaelin Carter, who stretched to make a leaping grab in the end zone for his first score as a Cardinal.

Cunningham finished 14 of 22 passing for 186 yards and ran nine times for 113 yards before going to the bench early in the fourth quarter. It was the fifth-year senior's 10th 100-plus-yard rushing game and third in a row.

“It’s a credit to my offensive line," he said. "They were blocking up and down the line. The whole week we prepared for them to take me. When they didn’t I just ran it.

“Our guys are just a bunch of dogs. I catch myself watching them. My teammates believe in me and have got my back. We got to get this thing back on track.”

Cunningham achieved a milestone as the eighth player in NCAA history to have over 3,000 rushing yards and 8,000 passing.

“He puts pressure on defenses when you can run like that,” Louisville coach Scott Satterfield said. “He’s a special player when he has the ball in his hands. When he’s honed in like that, he’s great.”

Louisville had one of its best games of the season offensively, out-gaining USF (1-3) 542-158. That total included 283 rushing, with Trevion Cooley gaining 75 on 11 carries and Tiyon Evans 53 on 13 attempts.

The Bulls (1-3) averted a shutout when Spencer Schrader kicked a 37-yard field goal on the first play of the fourth quarter.

The Bulls had three first-half turnovers. Gerry Bohanon Jr. threw two interceptions and USF had a fumble. Bohanon was 9 of 17 passing for 62 yards and was relieved in the third quarter by backup quarterback Katravis Marsh, who was 4 of 11 for 48 yards.

The goal post netting used to catch the football on extra points and field goals achieved what the Bulls struggled at, stopping Cunningham. After the mobile QB scored his third rushing touchdown to put Louisville up 21-0, he ran through the back of the end zone and into the net, falling down. Several teammates quickly rushed to free him from the netting, which eventually went up to catch James Turner's extra point.

“I’ve never had that happen," Cunningham said. "It’s crazy because I was trying to get out of the net and he was like, ‘We gotta go, we gotta go.’ But I was stuck in the net. And that was my first time actually ever getting caught in the net. It was pretty funny.”

South Florida: The Bulls rushed for just 48 as their road problems continued with a 14th consecutive loss dating back to 2019. Third-year coach Jeff Scott, the former Clemson assistant, is 4-21.

Louisville: The Cardinals needed a lift after falling last week to Florida State and were dominant throughout for the first time this season. It comes in handy as they play their next two games on the road before playing five ranked teams in their final six games.