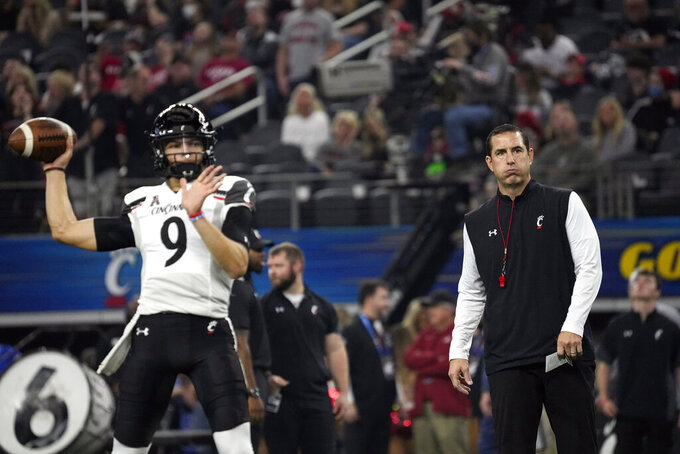 ARLINGTON, Texas (AP) — Michigan defensive back Dax Hill started against No. 3 Georgia in the Orange Bowl.

Hill’s status was uncertain after he did not join the second-ranked Wolverines in South Florida until Thursday.

Coach Jim Harbaugh said Thursday that Michigan’s second-leading tackler had not been with the team throughout the week of preparation for the College Football Playoff semifinal, but declined to give a reason why.

Harbaugh said Hill was questionable to play against Georgia.

Hill was on the field in a T-shirt, going through light drills with the other defensive backs more than an hour before kickoff, when only specialists are on the field in pads.

He ran onto the field for the first snap of the game, a Georgia running play. Hill finished the first half with three tackles as Michigan trailed 27-3.

Georgia safety Chris Smith was ejected for a targeting with 1:28 left in the first half against Michigan. Smith was penalized for leading with his helmet while blocking after a Georgia interceptions.

As far as the timing was concerned, it was probably the best case scenario for picking up a targeting foul. Georgia was up 27-3 and ran the clock out on the rest of the half.

The Bulldogs had to play the second half without Smith, who would be available in the national title game against Alabama because he will have served his penalty.

BACK IN THE CHAMPIONSHIP

Alabama will play in the national championship game for the sixth time in the eight seasons of the four-team College Football Playoff after beating Cincinnati 27-6 in the semifinal at the Cotton Bowl on Friday.

The Crimson Tide have won six consecutive semifinal games and missed the four-team playoff only once.

The only time the Tide made the playoff without getting into the championship game was in the inaugural CFP seven years ago, when they lost the semifinal Sugar Bowl 42-35 to fourth-seeded Ohio State. Cincinnati head coach Luke Fickell was then the defensive coordinator of the Buckeyes, who won that national championship game played at AT&T Stadium, where the Cotton Bowl is played.

Cincinnati cornerback Coby Bryant, winner of the Jim Thorpe Award that goes to the nation’s best defensive back, changed his number for the College Football Playoff semifinal at the Cotton Bowl against No. 1 Alabama on Friday.

Yes, Bryant is named after the late NBA great, even with the different spelling of the first name.

For the playoff game, Bryant switched from the No. 7 he had worn throughout his Cincinnati career to No. 8, one of the two numbers the basketball Hall of Fame player wore while winning five NBA titles over his 20 seasons with the Los Angels Lakers.

“My parents loved Kobe Bryant and my brother does too,” the Bearcats cornerback said. “So I was named for Kobe Bryant. It’s just spelled differently”

The Cotton Bowl marked the 94th time that Alabama enters a game as the No. 1-ranked team in the AP Top 25 under coach Nick Saban.

“Most of the time, when players have something to prove or something’s important to them, that sort of brings out the best in them,” Alabama coach Nick Saban said. “But when you play competitive sports, you not only have to prepare for what you’re supposed to do, you have to prepare for how are you going to react when the other guy does something different.”

Pac-12 champion Utah is playing in the Rose Bowl on Saturday — and was honored at the Orange Bowl on Friday night, where No. 2 Michigan faces No. 3 Georgia.

The Orange Bowl and the Football Writers Association of America combine to present an annual Courage Award, which this year went to the Utes in tribute to how the team fought through the deaths of Utah players Ty Jordan and Aaron Lowe.

The award, now in its 20th season, has been presented to teams twice previously: Tulane in 2005 and UConn in 2009.

“We always tell our guys that adversity will hit at some point, but what matters most is how we respond to it,” Utah coach Kyle Whittingham said. “This team has been faced with more adversity than we ever thought possible, and watching our players overcome it and respond to it the way they have has been incredible. The level of unity and love this team has for one another is something special. They define courage and we are proud to coach them.”

Jordan led all freshmen in rushing yards per game last season before his death on Dec. 26, 2020 in what police have concluded was an accidental shooting. He wore No. 22 for Utah; Lowe, as a tribute to his friend, changed his number from 2 to 22.

“The entire Utah football program has embodied what the Courage Award is all about,” Orange Bowl Committee President and Chair Jack Seiler said. “Through their tributes to their fallen brothers, and through their remarkable play on the field, the Utes have simply been inspiring to so many around college football. They have represented the very best of this great game.”