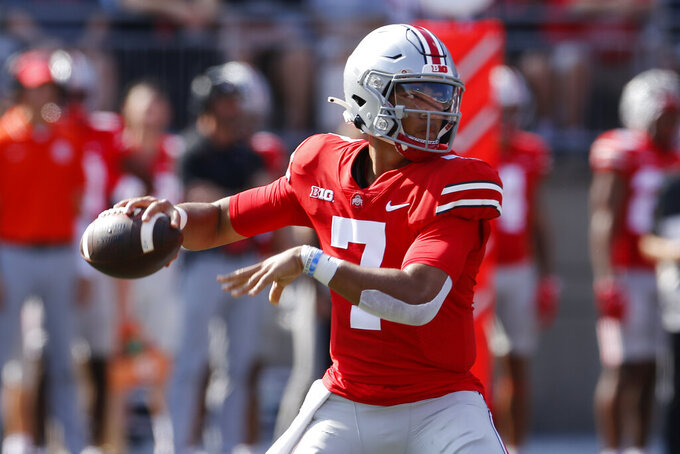 FILE - Ohio State quarterback C.J. Stroud drops back to pass against Tulsa during the first half of an NCAA college football game Saturday, Sept. 18, 2021, in Columbus, Ohio. Stroud, who threw for 4,435 and 44 touchdowns as a freshman, could be a Heisman Trophy candidate. Spring practice opened Tuesday, March 8, 2022. (AP Photo/Jay LaPrete, File)

COLUMBUS, Ohio (AP) — Ohio State's wild 48-45 win over Utah in the Rose Bowl helped salve the wounded spirit of a Buckeyes team coming off a humiliating loss at Michigan that ruined their championship hopes.

C.J. Stroud set passing records in the Rose Bowl game, but the problems that had dogged Ohio State's defense all season were still on display. In the Michigan and Utah games, the unit allowed a combined 950 yards and 87 points. The 42-27 setback at Michigan was the first loss to the hated rivals in eight seasons and first in the Jim Harbaugh era.

Rebuilding, reorganizing and rescheming the defense will be a focus for Ohio State in spring practice, which opened Tuesday at the Woody Hayes Athletic Center.

The Buckeyes have a new defensive coordinator, Jim Knowles, who had transformed Oklahoma State’s defense and was a finalist last season for the Broyles Award as the nation’s top assistant coach. The Cowboys allowed just 16.8 points per game in the Big 12 and were No. 3 in yards allowed per game (273.6) among all Power 5 programs.

“We have speed everywhere, we have size everywhere,” Knowles said. “The way guys move on the football field, it’s impressive to me. It’s my job to mold that into a cohesive unit and a defense.”

Knowles said the support he's gotten within the program has allowed a “hyper-focus” on the job at hand.

“I basically have everything I ever wanted, or anything every coach could ever want,” he said. “When you dream about being a coach at this level, that’s it. All the resources.”

Ohio State also has a pair of new secondary coaches who will build that unit around cornerback Denzel Burke and safety Ronnie Hickman.

“Once we get on the field and these (new coaches) get a chance to see them move around, identify, diagnose, run to the football, work on some of the techniques they may need to do those jobs, then from there we'll kind of adjust,” head coach Ryan Day said.

“Right now I want to put the guys in as many different positions as possible to see what they're good at so I can build things around what we have here,” Knowles added.

The holes left by departed receivers Chris Olave and Garrett Wilson, both potential first-round NFL draft picks next month, will quickly be filled by other potential stars.

Jaxon Smith Njigba is the No. 1 receiver after his 1,606 yards led the team last season. Marvin Harrison III's three touchdowns in the Rose Bowl set him up for a top role in 2022, and Emeka Egbuka and Julian Fleming will be given a chance to emerge.

Stroud, who threw for 4,435 yards and 44 touchdowns as a freshman and was named Big Ten Offensive Player of the Year, should be in the Heisman Trophy conversation from Week 1. Day and offensive coordinator Kevin Wilson said they intend to “put a little bit more on his plate” in 2022.

“At this point last year, he hadn't thrown a college pass. Now he's got a whole year under his belt,” Day said. “You kind of learn what to do, now you learn why you do it. It's just a little more of a deeper understanding of things.”

With the transfers of quarterbacks Jack Miller III and Quinn Ewers, Kyle McCord is expected to be the No. 1 backup to Stroud, with freshman Devin Brown behind him.

Running back TreyVeyon Henderson was terrific his freshman year, rushing for 1,248 yards and 15 touchdowns. Another freshman back, Miyan Williams, averaged 7.1 yards per carry as the main backup.

Three starters return on the Buckeyes offensive line. That unit will have a new position coach, Justin Frye, the former UCLA line coach and offensive coordinator who replaced the fired Greg Studrawa.

The 15 practice sessions will culminate in the annual Scarlet and Gray game April 16. The Buckeyes open the regular season by hosting Notre Dame on Sept. 3.