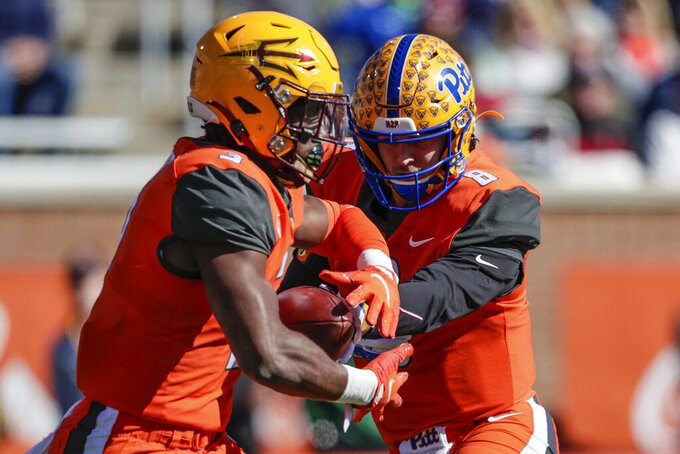 National Team quarterback Kenny Pickett, of Pittsburgh (8), hands the ball off to running back Rachaad White, of Arizona State (3), during the first half of an NCAA Senior Bowl college football game, Saturday, Feb. 5, 2022, in Mobile, Ala. (AP Photo/Butch Dill)

MOBILE, Ala. (AP) — The pass rushers did their best to steal the show from quarterbacks Desmond Ridder and Kenny Pickett in the Senior Bowl.

Cincinnati's Ridder threw two touchdown passes and the National team had eight sacks in a 20-10 victory over the American team Saturday.

“We didn't come out here to lollygag through it," Minnesota defensive lineman Boye Mafe said. "We told each other to go out and have our best games and play our best football. This was our last time to get to represent our schools so why not go out on a good note.”

Ridder helped finish off a job started by Pittsburgh's Pickett, a Heisman Trophy finalist who was 6-of-6 passing for 89 yards and a touchdown despite only playing the first quarter.

The National pass rushers made it a tough afternoon for their quarterback counterparts polishing off the weeklong showcase for top senior and graduated junior NFL prospects.

Winfrey was the overall game MVP, while Mafe was the National player of the game and Western Kentucky defensive lineman DeAngelo Malone was picked as the top American team player.

Winfrey wore a jersey signed by teammates and got to follow in the Senior Bowl footsteps of Los Angeles Rams defensive lineman Aaron Donald, a 2014 alum of the game.

“I've been dreaming about being in the Senior Bowl since I was a little kid,” Winfrey said. “I saw Aaron Donald dominate the Senior Bowl and I wanted to be the next to do that.”

Pickett and Liberty's Malik Willis were among the Senior Bowl passers vying with Mississippi's Matt Corral to be the first quarterback picked.

Willis started for the American team and mainly flashed his running and scrambling ability. He passed for just 11 yards but ran for a game-high 54 on four carries in the first quarter, flirting with a touchdown on a 27-yard scamper to end the first quarter.

Ridder completed 4 of 6 passes for 68 yards to finish up with another win. He led Cincinnati to 44 wins in his career and to the College Football Playoffs this season, ending with a semifinal loss to Alabama.

The National team delivered most of the big plays, culminating with Ridder's 25-yard touchdown to Wisconsin tight end Jake Ferguson in the fourth quarter.

Pickett, who led Pitt to its first ACC championship, capped his performance with a 20-yard touchdown to Baylor running back Abram Smith late in the first quarter.

Pickett spent the rest of the game as a spectator. But he's hoping the week's performance impressed NFL teams after making a huge leap as a player and a prospect in his senior season.

“Everyone was saying it was a flash in the pan season,” Pickett said. “Thirteen games playing at areally high level, I don't think it is.

"So I wanted to come down here and continue on that, being a consistent player.”

Howell, who had teammates recover both of his fumbles, scrambled and passed the American team to its first score. He collected a wide snap and ran left for a 2-yard touchdown late in the third quarter.

Howell's one completion on the drive was a 19-yarder to Utah running back TJ Pledger, a late sub who only arrived in time for Thursday's practice and also had a 23-yard run.

North Dakota State's Christian Watson caught an underthrown ball going to the ground and quickly popped up for a 38-yarder to set up the touchdown.

Then Ridder rolled right and hit Colorado State tight end Trey McBride for a 6-yard touchdown late in the second.

Winfrey got a trophy filled with peanut butter cups from sponsor Reese's but had no plans to enjoy them.