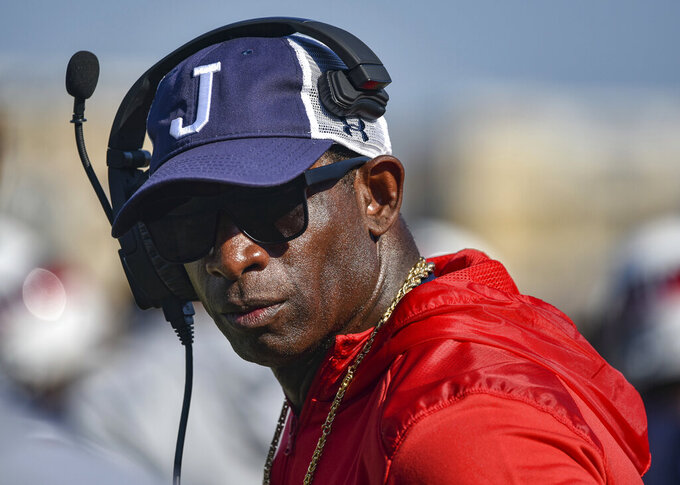 Jackson State coach Deion Sanders says historically Black college football programs can be a path to the NFL for top recruits, but it is difficult to compete with the wealthier, traditional power schools.

Sanders, a Pro Football Hall of Famer who starred with the Falcons, 49ers and Cowboys, is in his third season with Jackson State. The Tigers are 6-0 this year after winning the Southwestern Athletic Conference last year.

“Now with our emergence, kids feel like you have an option. I can still make it through there (an HBCU) and they can navigate me to the NFL,” Sanders said Tuesday during an interview on the AP Top 25 College Football Podcast. “I don't have to go to the one of the PWIs (predominantly white institutions) just to make it to the NFL.”

He spoke to The AP during a break in his visit to the Mississippi Children’s hospital in Jackson, where he was also representing the insurance company Aflac.

HBCUs, such as Jackson State and its SWAC rivals, were a goldmine of top talent for decades, in large part because of segregation.

Even as the Southeastern Conference schools integrated in the late 1960s and into the 1970s, many talented Black players ended up playing at HBCUs.

There are 33 players from HBCUs in the Pro Football Hall of Fame, but many of the biggest stars such as Willie Lanier (Morgan State) and Walter Payton (Jackson State) played during the 1960s and ’70s.

The number of NFL players being produced by HBCUs fell off after the 1990s, but there have been signs it is on the uptick again as scouts pay closer attention to those schools.

Sanders said he was was able to land two of the most sought-after football recruits in the country (five-star defensive back Travis Hunter and four-star receiver Kevin Coleman) this year because they saw an opportunity to be developed into NFL players by Coach Prime and his staff.

“So now it’s becoming an option,” Sanders said. “But it's not truly a balanced option because of facilities, because of the housing. Because of all the aesthetics at HBCUs. We’re underfunded and overlooked. So it's not the same.”

“So to convince a guy to leave the ’hood to go to the ’hood is pretty tough.”

Sanders also said his son, Tigers quarterback Shedeur Sanders, should receive Heisman Trophy consideration along with all top players who compete in the second tier of Division I college football known as FCS.

“I don't think these guys should be cut off just because of where they go to school.”