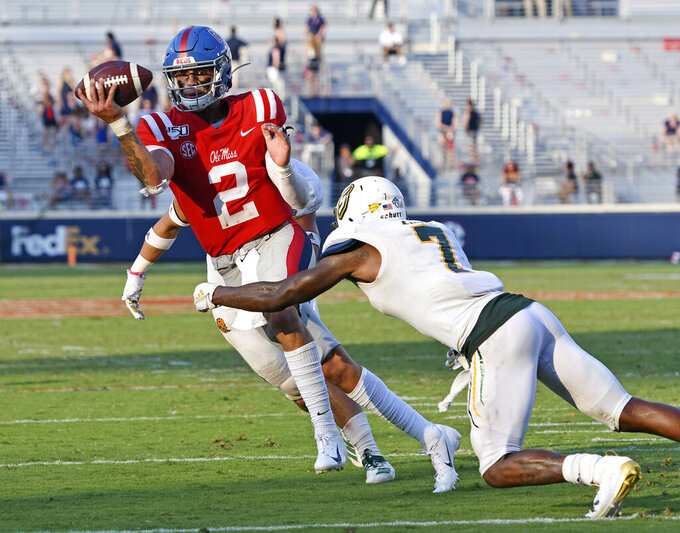 Mississippi running back Jerrion Ealy had flashes of brilliance in preseason practice and in limited appearances in his first two games. The true freshman had that much-anticipated breakout performance Saturday in a 40-29 win over Southeastern Louisiana.

Ealy turned in 273 all-purpose yards, including a 94-yard kickoff return touchdown and a 30-yard scoring run, as the Rebels (2-1) beat back a challenge from the FCS Lions (1-1), who had two drives finish inside Ole Miss territory in the final period.

"Man, I'm so proud of Jerrion. Really proud," Ole Miss coach Matt Luke said. "He was the difference in the game with that kickoff return and run. That got us in front and we scrapped and clawed to get the win."

Matt Corral finished 21 of 30 for 239 yards and two touchdowns as well as directing a pair of time-consuming, fourth quarter field goal drives. Luke Logan connected on field goals of 22 and 32 yards that preserved the win.

"On that kickoff return, I saw it open to the left and all I could think was I better score," Ealy said. "It was open and I don't get caught (from behind). Well, it's never happened. On the touchdown run, it's always about the offensive line and the job they do."

Chason Virgil kept the Lions within striking distance with 309 passing yards and two touchdowns on 29-of-44 passing, but was intercepted three times.

"Ultimately, we turned the ball over four times and did not play well on special teams," Southeastern Louisiana coach Frank Scelfo said. "You can't do those things against good teams like Ole Miss and expect to win."

The Rebels never trailed but could not break away despite rolling up 459 yards of total offense, including a game-high 103 rushing yards by Scottie Phillips. Corral threw touchdown passes of 9 and 5 yards to Elijah Moore and Jason Pellerin, respectively.

Virgil threw touchdown passes of 45 and 5 yards to Juwan Petit-Frere and Bransen Schwebel, respectively, in the third quarter to pull the Lions within 34-29 and set up the heroics by the Ole Miss defense.

"I'm really proud of how we didn't blink when we went down by 17 points," Scelfo said. "We gave ourselves a chance to win in the final quarter, which is all we can ask for."

Ole Miss: The consistency of Phillips was complemented by continued improvement of Corral and the big-play versatility of true freshman Ealy. Defensively, the Rebels struggled, but made enough big plays - three interceptions, a fumble recovery and two late stops on fourth down - to seal it.

"I was proud of those fourth-quarter drives," Luke said. "We put them in a two-score situation and that was enough to win."

The battle of two of the nation's best punters ended in a draw. Ole Miss punter Mac Brown punted four times for a 46.0 average that included a 57-yard best effort. Freshman Austin Dunlap countered with a 47.0 average on four punts, including a 50-yard kick that eventually trapped the Ole Miss returner for an additional 15-yard loss.