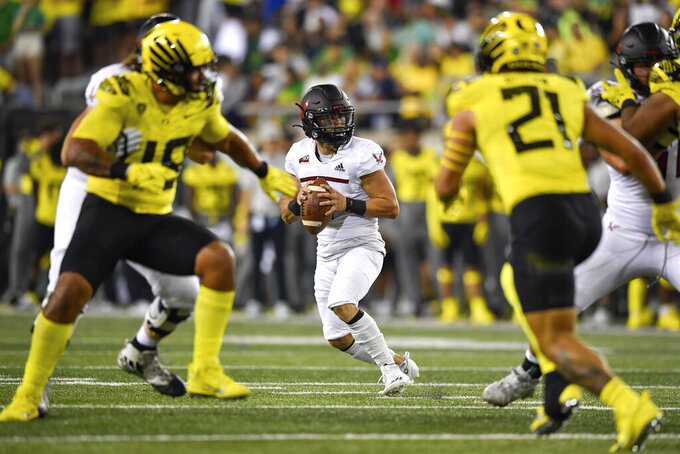 Eastern Washington will get $750,000 for making the twice-delayed trip to Gainesville. The game between Florida and former coach Jim McElwain’s alma mater had initially been scheduled for 2020 but was bumped because of COVID-19 rescheduling. It landed on the slate for Saturday but got pushed a day as Hurricane Ian tore through the Sunshine State. The payday game provides much-needed revenue for a program whose annual athletics budget is about $17.5 million. The Gators, meanwhile, should get a much-needed break after an early season gauntlet that included three ranked teams: Utah, Kentucky and Tennessee.

The lower-division Eagles should be no match for Florida quarterback Anthony Richardson, who is coming off one of the best performances of his young career. The third-year sophomore threw for 453 yards and two touchdowns at Tennessee. He also ran for 62 yards and two scores.

Eastern Washington: Efton Chism is the team’s all-everything receiver. He has 16 catches for 145 yards and three touchdowns. He also has seven kickoff returns for 180 yards and two punt returns for 11 yards.

Florida: Freshman S Kamari Wilson is scheduled to make his first career start in place of fifth-year senior Trey Dean. Florida says Dean has a lower-body injury, but no one would be surprised it he’s being quietly benched after giving up passing plays of 70 and 45 yards last week.

Eastern Washington is 11-27 all-time against teams from the Football Bowl Subdivision. The Eagles have won at UNLV, at Washington State and at Oregon State in the past decade. They have never faced a anyone from the powerhouse Southeastern Conference. … The Eagles have no players from the state of Florida; the Gators have one from Washington: backup QB Jalen Kitna. … Florida is 21-1 against Championship Subdivision teams, with the lone loss coming at home against Georgia Southern in 2013. … The Gators are 2-0 against Big Sky teams: beating Idaho 63-10 in 2018 and pummeling Montana State 69-0 in 1988. … Florida has won 14 consecutive non-conference games in the regular season, the sixth-longest current streak in the country.