Emmert says NCAA efforts to reform not motivated by fear 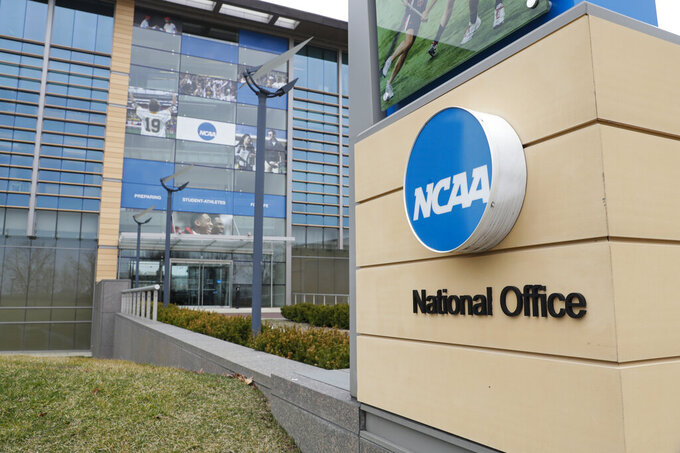 The NCAA's move to restructure college sports is not being driven by fear, but rather a desire to seize an opportunity to tackle issues that have been building for decades, NCAA president Mark Emmert said Monday,

“There’s few things that are being discussed right now that have been discussed off and on at least for the 10 years that I’ve been involved in the NCAA," Emmert said during a brief news conference. “But yet at the same time, we’ve never had a moment where we had state legislators, congressional actors, the courts, the economic dynamics, and even the pandemic, all providing a very important catalyst for change.”

Emmert's words came after the NCAA's online constitutional convention, during which the entire membership of more than 1,100 schools in its three divisions weighed in on the proposed, scaled-down version of the association's foundational document.

Emmert called for the constitutional convention over the summer, not long after the U.S. Supreme Court dealt the NCAA a potentially crippling blow. In upholding a lower court’s ruling in an antitrust case, the high court left the association vulnerable to lawsuits any time it makes a new rule the impacts athletes.

Rewriting the constitution is the first step toward decentralizing college sports' governance and deemphasizing the role of the NCAA.

“It has been a long time, 50 years, a half a century, since there was this thorough a look at what college sports is and how it should function,” Emmert said. “The inaction of the association at this particular moment would be very, very poorly received and it should be, frankly. If you have that much change going on, you darn well be better be ready and willing and able to change.”

The college sports administrators who make up the constitution committee, including Georgetown President Jack DeGioia, who is the chairman of the NCAA’s Board of Governors, spent about four hours presenting the proposal to members and taking questions.

“I ... thought it was a very successful first take, especially having never done anything quite like this in the history of the association,” Emmert said.

Last week, the NCAA unveiled a proposed 18-page constitution that more narrowly focuses the mission of the largest college sports organization in the United States while also providing a path for each of its three divisions to govern themselves more.

After two feedback periods, the proposed constitution could be amended. The plan is for the full membership to vote on it at the January NCAA convention in Indianapolis.

Then comes the hard part. Leaders in each of the NCAA's three divisions will dig into the task of restructuring and reimaging how college sports should be run.

At the Division I level, where college sports has also become a multimillion-dollar business for some schools, dramatic changes could happen. Everything from how revenue is shared, how schools and sports align, access to championship events and what is required to be a Division I member will be on the table.

That includes what to do with major college football, which largely operates independent of the NCAA and rakes in hundreds of millions of dollars that's shared by 130 Bowl Subdivision schools. The Knight Commission on Intercollegiate Athletics, a group of former and current college sports administrators, has recommended FBS be separated from the NCAA altogether.

DeGioia said the constitution committee met with representatives of the Knight Commission, but those types of structural changes are for the next phase of NCAA reform.

“We felt this is a Division I matter that needs to be dealt with by the Division I leadership,” DeGioia said. “And what we’re hoping we’re creating is a framework where that can most effectively be addressed at Division I.”

The Division I Transformation Committee has been chosen, led by Southeastern Conference Commissioner Greg Sankey and Ohio University Athletic Director Julie Cromer. The hope is for each division to have changes that can take effect by August 2022.

The new constitution continues to refer to college athletes as student-athletes, a term created decades ago as the NCAA tried to make a clear distinction between its amateurs and paid professionals.

Emmert said there was significant discussion about dropping the term from official NCAA usage, but the athletes themselves pushed to keep it.

“We were really, really passionate about that title,” former California University of Pennsylvania volleyball player Madeleine McKenna said during the convention Q&A session with membership.