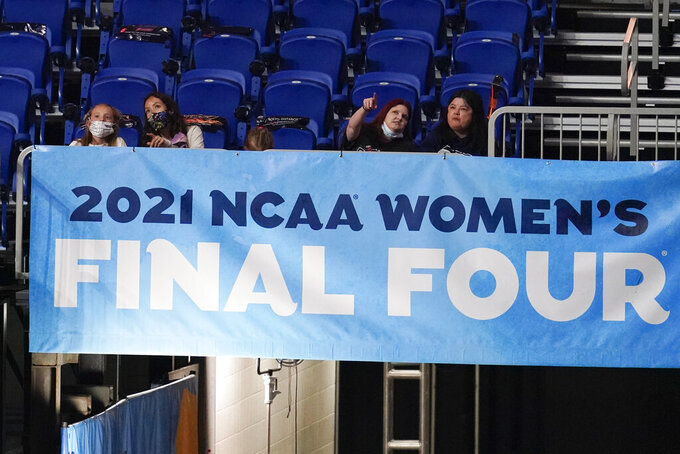 FILE - Fans watch from the stands during the first half of the championship game between Stanford and Arizona in the women's Final Four NCAA college basketball tournament in San Antonio, April 4, 2021. A year after the NCAA got called out for gender inequities between its men’s and women’s basketball tournaments, the organization has made changes over the past six months to make it more equitable. (AP Photo/Eric Gay, File)

ESPN has treated the NCAA Women’s Basketball Tournament on the same level as the College Football Playoff and “Monday Night Football.” But with increased attention toward how the women’s version of “March Madness” is treated compared to the men’s tournament, ESPN’s coverage will be under the microscope.

And that is fine for Pat Lowry, who oversees the network’s coverage of the women’s tournament.

“I certainly wasn’t worried about anybody questioning our coverage and whether we were putting the resources to it,” Lowry said. “We have put significant resources into it. It is one of the premier women’s events that we do. And I’ve never lacked resources on this.

“As things were unfolding (last year), I felt bad for some of the people with the NCAA because they were doing the best they could with what they had and were having to navigate through that.”

ESPN has carried the women’s tournament since 1996 and has been part of its evolution. Before ESPN took it over, the Women’s Final Four used to have its semifinal games early Saturday afternoon and the national championship the next day on CBS.

The national semifinal games are now on Friday night, with the championship game either late Sunday afternoon or evening.

“Certainly now the coverage is much more extensive than when I was playing. And it’s much more extensive than even a couple of years ago,” said ESPN analyst Rebecca Lobo, who led UConn to the national title in 1995. “We’re on more networks in the ESPN family versus regionalizing. So the coverage is expanding for the better and reaching a bigger audience and giving more people a chance to watch the games that they want to watch.”

Games used to have regionalized windows, but every game has had its own window. When the tournament begins Friday, games will be on either on ESPN, ESPN2, ABC, ESPNU, or ESPNews.

ABC will have four games for the second straight year — two apiece on Saturday and Sunday. ABC also had regular-season games for the first time this season.

“It’s huge to have games on ABC. They rate better. It’s a simple fact,” Lobo said. “The next step is to have the championship game on ABC. I wouldn’t be surprised if we saw that in the near future.”

A move to ABC would also quiet some who have wondered if having the women’s tournament on the same networks as the men would be better. Considering there are 68 teams in each field, that wouldn’t be feasible.

The Women’s Final Four in Minneapolis will receive extensive coverage across the ESPN networks. Besides the main broadcast on ESPN, there will be four alternate broadcasts.

One will resemble a “Manningcast,” two will feature angles from an aerial and rail cam and a final channel will showcase enhanced statistics utilizing player tracking from Second Spectrum.

Lobo, Ryan Ruocco and reporter Holly Rowe will again be the main crew, but Andraya Carter is a new addition as a sideline analyst this year. Elle Duncan will be the main host throughout the tournament after Maria Taylor left last year for NBC.

Lowry also noted that advertising for the entire tournament is sold out. But even with the momentum, there is still more work to be done.

“Ratings are up and everything feels really good, but you can’t let up on the gas right now. We’ve got to keep pushing and trying to innovate and generate more interest,” she said.