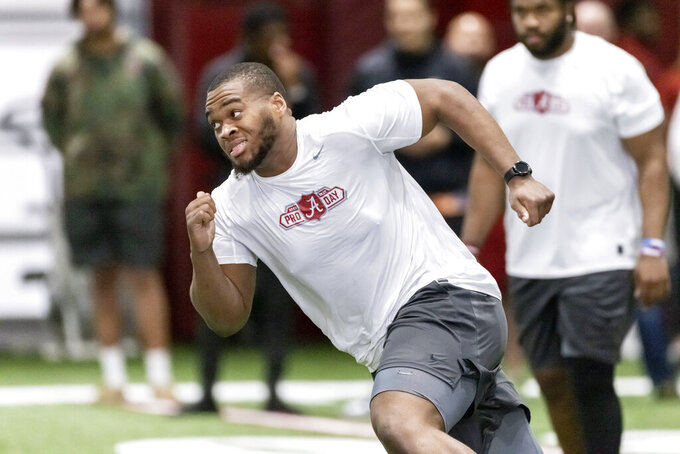 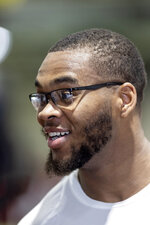 TUSCALOOSA, Ala. (AP) — Evan Neal was the big man at Alabama's pro day, and not just because of his towering physical presence.

The Crimson Tide's 6-foot-7, 337-pound left tackle was easily the highest-rated prospect going through pro day Wednesday before representatives of all 32 NFL teams. It didn't matter that he was just doing position drills.

A three-year starter at three different positions, Neal didn't feel the need to run the 40 at Alabama's indoor practice facility or the NFL combine. He's projected as a likely top-five pick in April's draft, with some talk about becoming the program's first No. 1 overall pick since Harry Gilmer in 1948.

“It would mean everything, definitely,” Neal said. “Coming from a school like this, you have a plethora of prospects that were worthy enough to be No. 1. For that to be me, that would be awesome for sure.”

Whatever his draft position ultimately becomes, Neal feels equipped to play either guard or tackle. He started 13 games at left guard in 2019, 12 at right tackle the following season and all 15 at left tackle in helping the Tide make the national championship game in January.

“You could pretty much put me any place but center and I could come in and make an impact,” Neal said. “But I see myself as a left or right tackle.”

Alabama coach Nick Saban believes Neal will do well in team interviews leading up to the draft to supplement his size, athleticism and game tape.

“He’s a bright guy. He’s articulate. He’s got a great understanding of football,” Saban said. “So he’s going to continue to impress people, whether it’s physically or mentally as they try to evaluate his skill set.”

Alabama doesn’t have it's typical amount of highly rated draft-eligible talent this year after producing 21 first-round picks over the last five drafts, including six in 2021. The Tide’s biggest stars — Heisman Trophy-winning quarterback Bryce Young and linebacker Will Anderson — will be juniors next season.

Besides Neal, wide receiver Jameson Williams is the other Tide player widely regarded as a first-rounder. Williams suffered a torn anterior cruciate ligament in January’s national championship, a month or so after fellow receiver John Metchie had a similar injury in the SEC title game.

Neither participated in pro day drills.

Williams said he was given a time frame of five to seven months before getting fully cleared and feels he’s ahead of schedule. The goal is to be ready for training camp.

“That’s what I’m shooting for, but what overrules that is just me making sure I’m 100% before I do anything,” Williams told The NFL Network at pro day.

Dr. Lyle Cain of Andrews Sports Medicine, who performed the operations on both receivers, said recently he feels they should be able to run routes and otherwise participate in camps.