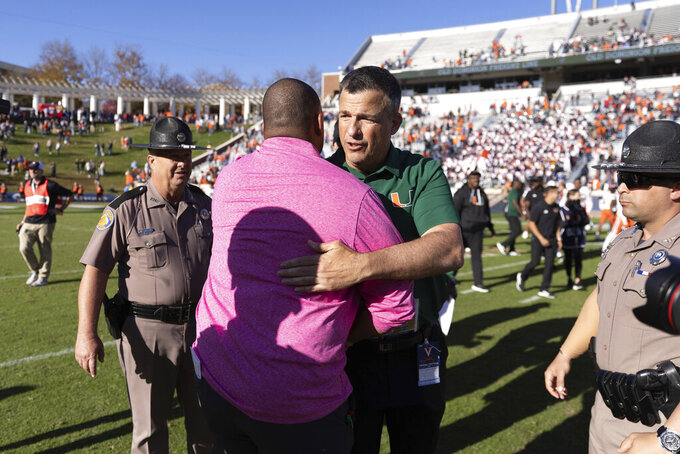 Every summer, every league in the country has some sort of preseason media gathering, the Atlantic Coast Conference included. Those events always go the same way: Coaches downplay expectations, quarterbacks praise their offensive line and receivers, and savvy reporters leave with a notebook filled with ideas for the season.

There’s also a preseason poll, predicting how the season will go. And in the Coastal, such an exercise has been utterly futile, useless and often completely wrong.

North Carolina winning the Coastal Division this season — the final season of divisional play in the ACC — was a surprise to 89% of voters, which frankly shouldn’t have surprised anyone, since the only constant in America’s wackiest division over the last decade was that voters rarely knew what was going to happen. In the last 10 seasons of ACC divisional play, voters predicted the Coastal winner right exactly twice.

His team was picked third in the preseason poll, with 18 out of a possible 164 votes. Clemson was the winner in the Atlantic, as expected; the Tigers got 111 votes.

The Tar Heels’ path to this ACC title game followed the one that almost always got taken in the Coastal. Someone emerged, and it rarely was the team that most everyone expected.

Over the last decade, the only team that won the Coastal and got more than 50% of the preseason votes was Miami in 2017 — the first, and only, time the Hurricanes made the ACC championship game in the divisional era that started in 2005.

Oh, how the Coastal has proven that.

Duke was picked last in the Coastal in 2013. Last. The Blue Devils started that season 0-2 in ACC play. They went 6-0 the rest of the way to win the Coastal.

“Who knows what’s going to happen?” then-Duke coach David Cutcliffe asked toward the end of that season.

The answer was pretty much nobody.

The Atlantic Division made voters look smart. Thanks to almost-annual dominance by either Florida State or Clemson, the team that represented the Atlantic in the ACC title game finished first or second in the preseason poll 14 out of 17 times in the two-division era. (The ACC didn’t have divisional play in 2020, a season where the format changed temporarily because of the pandemic.)

The Coastal Division made voters look ... well, not smart.

And Miami’s success, or lack thereof, since joining the ACC is a big part of the reason why Coastal voters haven’t had a great track record. The Hurricanes were picked to win the Coastal six times in the divisional era. They got to the ACC title game once; they would have gone one other time if not for self-imposed postseason sanctions related to the scandal surrounding rogue former booster Nevin Shapiro in the early 2010s.

In his defense, first-year Miami coach Mario Cristobal cringed from the outset about there being high expectations for the Hurricanes this season.

Year 2 of the Cristobal era will come in 2023 without divisions in the ACC.

The new plan, adopted by the league’s athletic directors and faculty athletic representatives over the summer, will be what the league calls a 3-5-5 model and goes into effect with the 2023 season.

All 14 of the ACC’s football members will have three permanent scheduling partners and play those schools each year. They’ll face the other 10 schools once every two years; five one year, five the next. It means that every ACC team will play all conference opponents home and away at least once every four years.

The ACC is keeping its championship game. Instead of pitting division champions, the top two teams based on conference winning percentage will make the title game.

And there will be a poll next summer. Maybe it’ll be easier to predict the future.