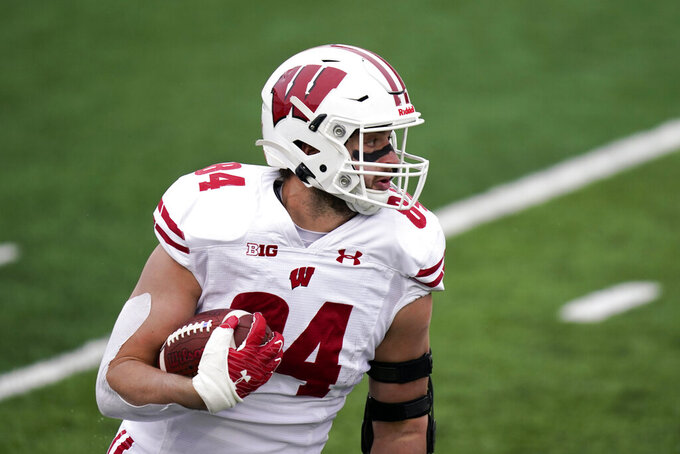 FILE - In this Dec. 12, 2020, file photo, Wisconsin tight end Jake Ferguson runs up field during the first half of an NCAA college football game against Iowa in Iowa City, Iowa. Ferguson has a special understanding of his school’s football history that makes him want to leave his own legacy on the program. Growing up as the grandson of former Wisconsin football coach and athletic director Barry Alvarez will do that. (AP Photo/Charlie Neibergall, File)

MADISON, Wis. (AP) — Wisconsin tight end Jake Ferguson has a special understanding of his school’s football history that makes him want to leave his own legacy on the program.

Growing up as the grandson of former Wisconsin football coach and athletic director Barry Alvarez will do that.

So when Ferguson had the option of ending his college career last year, he never seriously considered it. There was no way he was going to go out on such a disappointing note.

The fifth-year senior’s bid to help the 12th-ranked Badgers bounce back from a 4-3 season begins Sept. 4 when they host No. 19 Penn State.

Ferguson’s decision to return to school didn’t surprise his teammates or his coaches.

“He wanted to put his stamp on this program,” tight ends coach Mickey Turner said. “I don’t mean just as a player. He’s done some great things as a player. I just mean as a team. He wanted to be able to look back, and maybe he comes to a reunion in 15-20 years and he’s with his buddies and (saying), ‘Remember that game, that season, that year?’ I don’t think last year was what he wanted to remember.”

Ferguson’s ties to this program go beyond his grandfather. Ferguson’s older brother, Joe, played safety for the Badgers from 2013-17. His dad, Brad Ferguson, played linebacker for Nebraska.

The Ferguson brothers occasionally matched up against each other in practice during that 2017 season, but they'd spent years preparing for just that scenario. Alvarez says the siblings had a blocking dummy set up in their playroom as kids.

Alvarez noted one major difference between the two brothers. While Joe was sensitive about the idea people might think he would get special treatment because of his grandfather, Jake never had any issues about the family connection.

“When they were young, Joe would come to football camp and he’d tell his mother, ‘Tell Grandpa to pretend like he doesn’t know me,’ when we had 500 kids out there,” Alvarez said. “Jake would come out, I’d be on one goal line and he’d be on the other goal line, and he’d start yelling, ‘Grandpa! Grandpa!’ He was just the opposite.”

It was inevitable that Ferguson would play for Wisconsin.

“Being around this place, it’s home to me,” Ferguson said. “I love it here.”

Ferguson has caught at least 30 passes each of the last three seasons. He had 30 receptions for 305 yards and four touchdowns a year ago to lead the Badgers in all three categories. Ferguson’s rapport with quarterback Graham Mertz became evident when they connected on three touchdowns in a season-opening 45-7 blowout of Illinois.

“Having him is big-time for me and for this offense as a whole,” Mertz said. “I love Fergy.”

Ferguson now wants to become a more complete tight end and a better conditioned player. He hopes to reach the goals he couldn’t achieve last year. That’s part of the reason he’s back.

“I think a lot of it was just 2020 as a whole being tough, just a ton of adversity and not getting that normal football feel,” Ferguson said. “It didn’t feel right to me. And then I think another aspect of it is the guys I came up with as a freshman, a lot of them are on that o-line. Sitting down, talking to them, we thought we could do something really special this year.”

This season certainly will be different now that Alvarez has retired as athletic director.

Ferguson remembers all those times the last few years when he could look up from the practice field and see Alvarez watching from his balcony. Alvarez recalls how he occasionally would nod if he saw his grandson doing something well.

Although Ferguson can’t count on that happening all the time anymore, he knows his grandfather will still be keeping tabs on him. Ferguson plans to make him proud.

“He loves this university,” Ferguson said. “He loves this program. He put his blood, sweat and tears into this thing. And I’m going to try to do the same.”